A wonderful presentation of a wonderful film 5 Stars

The Academy Award-winning Roman Holiday*, now 67 years old, manages to charm and warm and conjure as many smiles today as it did back in 1953. A testament to the stars aligning so magically. I suppose those stars align like that on any legendary collaborative art, but there is something so bewitching about the result here. The scene where Bradley and Princess Ann first meet, with Peck’s perfectly gentlemanly response and Hepburn’s sleepy, drunk-like meandering as she is shuffled from a public bench to the safety of Bradley’s apartment is still one of the most fun and well-timed sequences there is. Very highly recommended.

Princess Ann (Audrey Hepburn) rebels against the strictly scheduled rules of her life while on a state visit to Rome and steals away to the beautiful city of Rome. There, feeling the effects of a sedative, she falls asleep on a street bench where she is discovered by an American reporter, Joe Bradly (Gregory Peck). He doesn’t recognize that she is a princess believing she’s simply drunk. Being a gentleman, he takes her to the safety of his apartment to ‘sleep it off’. When he does discover who she is, he hides his profession and secretly works on a story about her. As they enjoy an adventure exploring the city together as ‘tourists’, they grow unexpectedly close.

Director William Wyler fought Paramount for the ability to make this film on location in the romantic city of Rome, eschewing the Hollywood backlots for the authenticity and beauty of one of the world’s most lovely cities. While his interest and instincts for shooting this film on location were spot on, he was just as interested in working away from American to be out of reach of the House Un-American Activities Committee and to avoid becoming caught up in their shameful investigations. To be able to shoot in Europe, a much more expensive proposition than shooting in Hollywood, meant he was dealt a reduced budget, having to shoot in black and white instead of glorious technicolor, and working with a relative unknown for his leading lady. It’s hard to quantify just how key these various elements, which must have been to Wyler’s chagrin at the time, contributed to the utter perfection the film would become. Sometimes bad news is simply good news in disguise.

My earliest memories of Roman Holiday are watching it on a small, 24” or so Hitachi Sonic television, probably on BBC One or Two. Despite being young, 10 or 11 I suspect, I loved the film. It was fun and funny amidst the evolving romantic stuff that I guess I was supposed to be put off by at that age. But I wasn’t. The film was a sparkling celluloid delight that had you fall in love with Audrey Hepburn’s “Anya” as much as Gregory Peck’s Joe Bradley does.

And Audrey Hepburn, a newcomer on this film, positively lights up the screen with her charm and beauty. Her performance is one for the ages. She has a magnetic presence here and her sense of innocence and desire for a dalliance with normalcy is positively compelling. Screen legend Gregory Peck is unequivocally charming in this film as he portrays a man earnest in his hustle for a story who manages to ultimately avoid betraying the decency within him. His comedic timing is on point and the film just wouldn’t work without his beat-worn experience and handsome charms alongside the impeccable Hepburn.  Special note must be made of Eddie Albert who plays Bradley’s pal, photographer Irving Radovich. He’s a gruffy dose of fun throughout and a real gem.

The story of the film’s writer has quite the history, too. Screenwriter Dalton Trumbo asked his good friend Ian McLellan Hunter to serve as a front for him so that Roman Holiday would not be encumbered by the darkness of the McCarthy era (the Second Red Scare). He was also unable to take home the Best Writing Academy Award as a result. After considerable work to rectify this for the records by Trumbo’s family and friends, a Story By credit was finally Added (appearing on the 2003 DVD release). As part of the restoration work performed here (for theatrical viewings back in 2015), Trumbo’s credit for Screenplay has now been rightfully added as well, putting to rest the sad absence of his name in all the places it deserved to be on this masterpiece of a film.

A little spoiler warning here, but by trading an unabashed uplifting romantic ending for a decidedly more bittersweet reality was a bold, but deeply rewarding move that helped solidify Roman Holiday as an instant classic. It’s a magnificent film that delights the senses with humor and heart, drama and doubt, and romance and regret.

Presented in its original theatrical aspect ratio of 1.37:1, the frame-by-frame restoration performed by Paramount on Roman Holiday yields spectacular results. Scratches and detritus removed, bad splicing ‘repaired’, and the terrific cinematography showcased as I’ve never seen before. A lovely black and white image with lovely black levels (sincerely lovely), the image is revealing and stable, with film grain almost entirely as it should be. Paramount, working with less than ideal circumstances (without a surviving original negative) have worked a minor miracle.

I’d be inclined to give this image a 5-star rating, but without as detailed a knowledge of what this should look like, I find myself deferring to the good Robert Harris (you can find his A Few Words About… comments here). Regardless, this is an impressive looking disc and a welcome sight.

This 9th film in the Paramount Presents line is a delight.

With an English Mono TrueHD track, Roman Holiday isn’t a complicated audio affair, with dialogue driving the picture and the delights of Georges Auric’s score sweeping and playfully dancing in perfectly. It’s all nicely clear and distortion free and about as faithful as I can imagine.

A good collection of special features here running nearly 90 minutes in total with a new one featuring film critic Leonard Maltin discussing with enthusiasm the film and its making leading the pack. Everything from Hepburn’s incredible collection of films made with Paramount covered, and a look at screenwriter Dalton Trumbo’s career and blacklisting.

The Academy Award-winning Roman Holiday*, now 67 years old, manages to charm and warm and conjure as many smiles today as it did back in 1953. A testament to the stars aligning so magically. I suppose those stars align like that on any legendary collaborative art, but there is something so bewitching about the result here. The scene where Bradley and Princess Ann first meet, with Peck’s perfectly gentlemanly response and Hepburn’s sleepy, drunk-like meandering as she is shuffled from a public bench to the safety of Bradley’s apartment is still one of the most fun and well-timed sequences there is. Very highly recommended.

I picked up the digital version from iTunes.

I hope paramount doesn’t a 4k digital release as well. 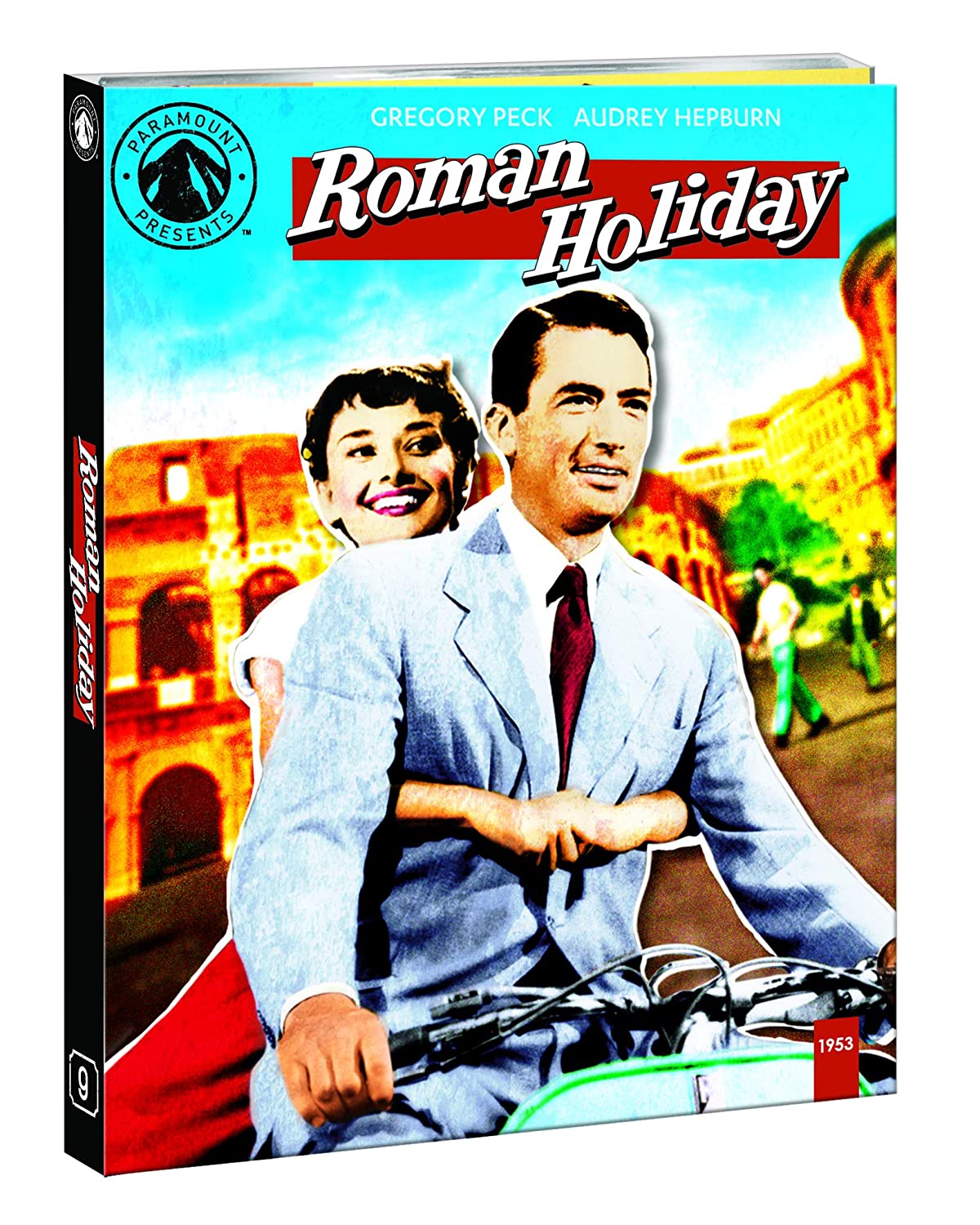