Forum List What's new Dark Style Change width
Log in Register
What's new Search
Menu
Log in
Register
Navigation
Install the app
More options
Dark Style
Close Menu
Posted on July 2, 2016 by Matt Hough
You are using an out of date browser. It may not display this or other websites correctly.
You should upgrade or use an alternative browser.
Futuristic satire gets more impressive with age. 4 Stars

Norman Jewison’s dyspeptic view of an undesirable future might not have the horrifying eccentricity of Stanley Kubrick’s A Clockwork Orange, but Rollerball is an enjoyable if sobering ride to a future whose shiny surface but rotten underbelly is all too believable and acrid.

Twilight Time brings another of its most popular sellouts back into circulation with Norman Jewison’s discomforting, often brutal Rollerball. Other than some slight cosmetic alterations to the case art, booklet, and Julie Kirgo’s always uber-enjoyable essay and the loss of the mono encode in favor of a 2.0 rather mundane stereo selection, this is the identical release from two years ago with no new additions to its fine feature array. A life of comfort and privilege has never looked so abysmally dystopian than in Norman Jewison’s eye-opening futuristic cult film Rollerball. Centered on a fictional sports event that has captivated the world but truly revealing a malignant, dehumanizing governing force at work, Rollerball might not quite reach the satirical heights to which it was aiming, but it’s exciting enough and disturbing enough to inevitably draw us into its violent core.

In a futuristic world society, nations have been superseded by corporate entities that control all aspects of human life, and this includes a mesmerizing combat sport called Rollerball, a combination of hockey and roller derby with a ten pound metal ball instead of a puck and motorcycles on the track to aid in increased acceleration for the players. In this society of the future, individual achievement and freedom of choice are disallowed with the focus of life being to follow corporate orders like sheep and enjoy the rewards of comfort and luxury.  How disturbing for the governing ministers, then, when Jonathan E. (James Caan) becomes not just a talented player for the Houston Energy team but a cult hero with an almost fanatical fan base. When Energy czar Bartholomew (John Houseman) informs Jonathan that he must retire with two championship games left in the season, Jonathan refuses not only because he doesn’t want to let down his team but also because he doesn’t understand the rationale behind the decision and wants to know who’s calling the shots on his life. Thus begins a long, winding investigation about the corporate wars and the identities of those now in control, all the time the heads of the businesses begin changing the rules of Rollerball in the hope that by eliminating penalties, opposing players can take care of Jonathan for them.

William Harrison’s screenplay based on his short story “Rollerball Murders” doesn’t quite punch up the satirical stabs enough at the growing corporate control of the world and the human race’s quick acceptance of their loss of choice for a few luxuries, but he certainly gives it a game try. There is also quite a disturbing view of this decidedly male-dominated society with women functioning as mere objects of pleasure (there is one older woman among the corporate big shots, but the women in the general population seem to serve as nothing more than courtesans). He’s also very definitely skewering the bloodlust of the crowds eager for greater and greater amounts of violence in their combat sports (at the time of the film’s release, it was greatly condemned for its brutality; it seems almost tame today in its restraint). Director Norman Jewison’s three Rollerball matches grow increasingly more sadistic as the rule book is tossed out the window, but he doesn’t shy away from getting his cameras into the midst of the action (all of this a year or so before the invention of the Steadicam) and offering the viewer a defiantly visceral sensation of the game’s viciousness, especially in the second and third matches. While there may some continuity problems with the matches and fan reactions, the movie nevertheless offers both an action-packed scenario for those interested in that and a more thoughtful look into a rotten-to-the-core futuristic society which science fiction even without space ships can shine a revealing light on.

Coming off of an Oscar nomination for The Godfather and an Emmy nomination for Brian’s Song, James Caan was at the height of his popularity when he filmed Rollerball, and there’s no denying his athletic charisma as the driven Jonathan E. What’s most impressive with his performance is in its quietness away from the track as he methodically searches for answers to the corporate puzzle and as he loses all of those who had been his support network as they yield to corporate pressure: his mentor Cletus (Moses Gunn, a solid and determined performance), his coach Rusty (Shane Rimmer), and the three women who have been provided to “service” him (Maud Adams, Barbara Trentham, and Pamela Hensley). John Beck steals most of his scenes as the team’s playboy/goodtime Charlie Moonpie, and John Houseman is similarly dominating as the resolute executive who must bring Jonathan down. Ralph Richardson has a most disquieting scene as the chief librarian who finds even he can be denied answers to questions the executives don’t want posited.

The film’s theatrical 1.85:1 aspect ratio is faithfully replicated in this 1080p transfer using the AVC codec. Sharpness has been monitored carefully to keep images looking like they might be occurring many decades into the future with slight increases occasionally in contrast for a dream-like atmosphere but crisp enough to provide an entertaining visual experience. Color has been nicely delivered with solid hues and outstanding skin tones. There is a stray dust speck or blip here and there, but for the most part the transfer is remarkably clean and appealing. Black levels are good but not always great. The movie has been divided into 24 chapters.

The disc offers both surround and stereo audio encodes: DTS-HD Master Audio 5.1 and 2.0 mixes. Though the original release sported a mono track which likely represented the way most movie patrons experienced the film in 1975, it was fairly anemic, and the stereo encode included here is likewise rather lackluster. The 5.1 track is strong across the front soundstage but less successful in the rears where only occasional music cues and some atmospheric effects and crowd noises tend to reside. The center dialogue track (there is some directionalized dialogue) seems a bit tame here, not exactly overwhelmed by sound effects or music but also not very dynamic with so many of the actors being rather soft-spoken with their line readings.

Audio Commentaries: director Norman Jewison and screenwriter William Harrison each gets his own commentary track. Jewison’s is the chattier of the two and offers fine anecdotes on the film’s conception and production. Harrison starts off strong but then searches for things to talk about as the film runs basically reduced to describing the themes and action transpiring in scenes and with more quiet moments than Jewison.

From Rome to Rollerball (7:54, SD): director Norman Jewison and star James Caan talk about the film’s themes and the rules of the game while we get to glimpse behind-the-scenes work on the movie and the actual shooting of the matches in Munich.

Return to the Arena (25:04, SD): a 2001 featurette with director Norman Jewison, writer William Harrison, co-star John Beck, editor Antony Gibbs, and some of the stunt people on the movie describing the pre-production work, the staging and plot of the story and the sports events, and some behind-the-scenes shots showing how it was all filmed.

Six Page Booklet: includes some artist renderings of the sport of Rollerball, poster art on the back cover, and film historian Julie Kirgo’s perceptive view of the film.

Recommended! Norman Jewison’s dyspeptic view of an undesirable future might not have the horrifying eccentricity of Stanley Kubrick’s A Clockwork Orange, but Rollerball is an enjoyable if sobering ride to a future whose shiny surface but rotten underbelly is all too believable and acrid. There are only 3,000 copies of this Blu-ray available. Those interested should go to either www.twilighttimemovies.com or www.screenarchives.com to see if product is still in stock. Information about the movie can also be found via Facebook at www.facebook.com/twilighttimemovies .

I traveled on over to Washington,DC to see this @ the Uptown theatre. It was in 4.0, and the best part was the sound of the ball rolling around the back of you. I didn't care for it then.

I agree with the above comment. To this day I can still remember the ball rolling around the theater in the audio mix. And this was in the '70s, before Dolby Digital Surround mixes. I wonder if this is captured in the 5.1 mix on this Blu-ray.....

When I rewatched it the other day before filing the review, I do remember the ball panning through the right side of the soundfield, but I'm not sure I remember a complete circular audio trip for it. However, I could have been distracted by other things on the soundtrack and the visuals.

How does it stack up to the Arrow release? Better? Worse?

I don't have the Arrow release, but maybe someone who has both can answer your question.
You must log in or register to reply here. 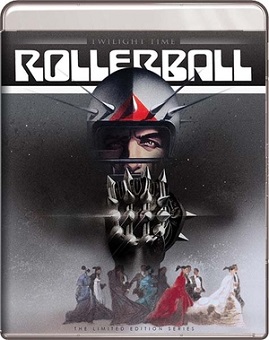