Forum List What's new Dark Style Change width
Log in Register
What's new Search
Menu
Log in
Register
Navigation
Install the app
More options
Dark Style
Close Menu
Posted on November 23, 2021 by Todd Erwin
You are using an out of date browser. It may not display this or other websites correctly.
You should upgrade or use an alternative browser.

If you’ve been reading any of my articles on streaming here on Home Theater Forum, then you know that I’ve been having something of a love-hate relationship with Roku, especially their devices. When the company announced their 2021 product lineup a few months back, I was excited to hear the specs of their new Streaming Stick 4K, set to replace the aging Streaming Stick+ in their lineup. 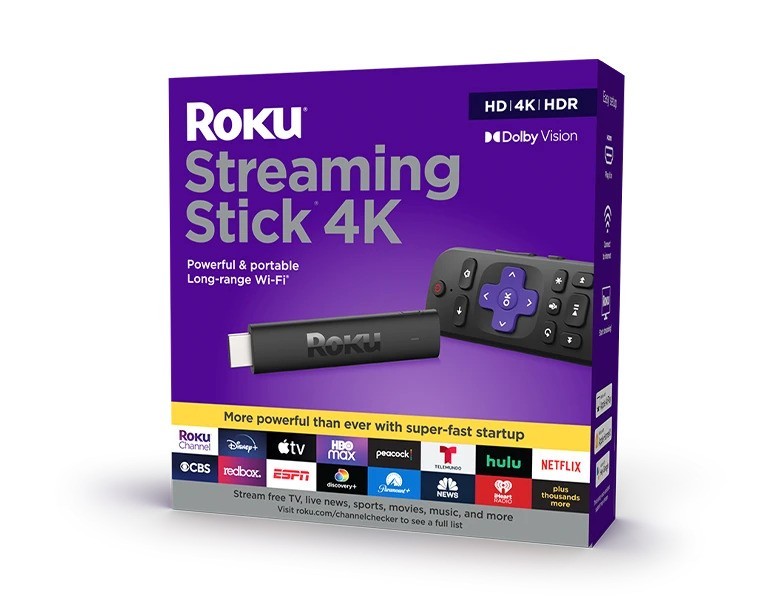 So, first, let’s talk a bit about the prior model, Roku’s Streaming Stick+. Released in October 2017, the device was good for the price at the time of its release. It was dual-band Wi-Fi (2.4 and 5 GHz), supported UHD (2160p) and HDR10, with an RF-based remote with voice features. It did its job rather well, at least four years ago. Apps were slow to load, Dolby Atmos was supported on most apps like Vudu, Movies Anywhere, HBO Max, and Disney+. But Netflix was a conundrum – because the device did not support Dolby Vision, Netflix would not allow it to support Dolby Atmos, and that was always a sticking point for me with nearly all of Roku’s devices, until last year when the company unveiled their first device to support Dolby Vision: the Roku Ultra (4800R). The 2020 version of the Ultra supported Netflix’s implementation of Dolby Atmos, even on displays that did not support Dolby Vision. The downside was that the Ultra retailed for $99.99. The Ultra also has a known bug (which still has not been fixed) where if you set the Digital Audio Output format to Auto, the device turns on the Dolby Atmos flag for every audio stream it sends to your receiver or soundbar if it supports Dolby Atmos, even 2-channel PCM stereo audio streams. The workaround is to set it to Passthrough instead. 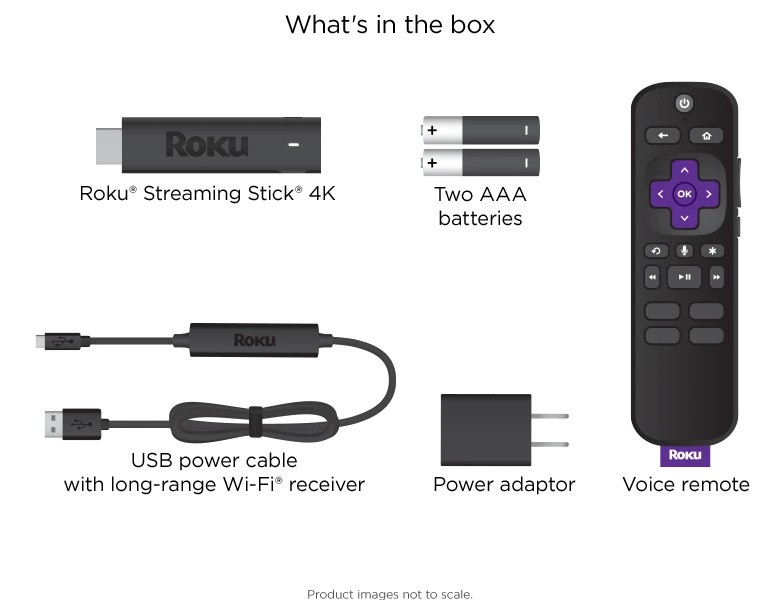 Earlier this month, I purchased the Roku Streaming Stick 4K for my new LG C1 OLED, since the Streaming Stick+ that was installed on the TV that the OLED was replacing did not support Dolby Vision. The Streaming Stick 4K comes with the streaming stick HDMI dongle, a microUSB to USB power cable with integrated long-range Wi-Fi receiver, USB power adapter, Roku Voice Remote (mine came with quick launch buttons for Netflix, Disney+, AppleTV+, and Hulu), and two AAA batteries. I installed the device in the back of my Denon AVR-S930H in the same slot as my older Streaming Stick+. Setup was easy, but there was some cleanup of the user interface afterwards. Once activated, the device began installing all of my apps that I have installed on all of my other Roku devices. Two small problems, though – the pre-installed apps that I do not use were still on the device and needed to be deleted, and each app needed to be re-organized to more closely match my other devices (I like to group my apps by their type: Movies/TV, News, Free Movies/TV, Music, etc.). Once that was done, I went back to checking the Video and Audio settings. While it detected my display as a 4K Dolby Vision TV, there is a setting deep within Advanced System Settings which leaves HDR in the ON position at all times by default. This is becoming a common practice on nearly every streaming device I’ve come across in recent years, from Amazon Fire Sticks to Rokus to Tivo devices to Apple TV (yes, even Apple TV!). There is absolutely no reason for a setting like this, and even so, it should not be on by default, and even worse, it should not be buried several layers deep within the Advanced Settings menu. Once full time HDR was disabled, it was time to check the Audio settings. Under Digital Audio Output format, the Streaming Stick 4K has three options: Auto, Stereo, and Custom (forcing the Roku to output DTs or Dolby Digital). I chose Auto, and this device did not have the same issues that the setting caused on my Ultra. I launched Netflix, and was pleasantly surprised that Army of the Dead played in both Dolby Vision and Dolby Atmos! Response and app load times appear to be slightly faster than the Streaming Stick+, and I had no major issues with any of the usual apps I watch on my Roku devices, including Disney+, Apple TV+, Movies Anywhere, Prime Video, Vudu, or Hulu. Paramount+ was unable to play A Quiet Place and A Quiet Place Part II in Dolby Vision and Dolby Atmos, only in UHD HDR10 and Dolby Digital + 5.1, but this is something the developers at Paramount+ are working on to expand their device support beyond just Apple TV 4K. The remote works well, and has a more textured surface than previous Roku Voice Remotes, making it less likely to slip out of my hands. I only wish the device were capable of being used with a universal remote. The Roku Streaming Stick 4K also support HDR10+ addition to Dolby Vision and HDR10 (my display does not support HDR10+, so I was unable to test it).

All in all, the new Roku Streaming Stick 4K is definitely a winner, and possibly the best choice for a streaming device under $50, with many retailers selling for $30 as part of Black Friday 2021.

50% Off $49.99 $24.98 (as of December 2, 2022 02:57 GMT -08:00 – More infoProduct prices and availability are accurate as of the date/time indicated and are subject to change. Any price and availability information displayed on [relevant Amazon Site(s), as applicable] at the time of purchase will apply to the purchase of this product.)

1) I’m on vacation right now and the Roku 4K stick is a good travel gadget. I plugged it into the hotel TV, connected to hotel wifi, and am watching my shows on my streaming services. I’ve got to remember to pack the remote and a pair of AAA batteries. And I’m powering it off my battery pack because there’s no plug nearby and the TV too old to power it from HDMI or USB. It’s not a trivial solution, like watching Netflix on my iPad. But for the mildly tech savvy, the Roku is a solid travel companion.

2) Why are you using a Roku (or any streaming gadget) on a brand-new LG TV? LG has solid apps that work well for all services. Is there something missing from the LG apps?
Last edited: Nov 24, 2021

DaveF said:
2) Why are you using a Roku (or any streaming gadget) on a brand-new LG TV? LG has solid apps that work well for all services. Is there something missing from the LG apps?
Click to expand...

Dave, ARC and I have never gotten along, plus LG only updates their WebOS for three years.

Hey @Todd Erwin whats up with the AppleTV app? Is there really no way to do anything but play the movie on the Roku app? Can’t view trailers, extras nothing?

Sam Posten said:
Hey @Todd Erwin whats up with the AppleTV app? Is there really no way to do anything but play the movie on the Roku app? Can’t view trailers, extras nothing?
Click to expand...

It’s been that way since day one. It’s also the biggest complaint about the app according to one of the agents I spoke with recently at Apple.

thanks. We were trying to decide if we should watch Old Henry which I bought at home on my parents Roku. Couldn’t pull up a trailer so chose another film

I meant to post this info months ago and forgot to. . .my Streaming Stick + had the infamous audio dropout issues (especially with Atmos content) that worsened over time. Back around Black Friday, I decided to try this new one, since the box claimed that it has much-improved wifi. Lo and behold, NO MORE AUDIO DROPOUTS!!! (Well, it occasionally happens on the Hulu app when a commercial ends, but that's clearly an app-specific problem.) I did have to order one of those free extender dongles, which was kind of a hassle, but minor.