Forum List What's new Dark Style Change width
Log in Register
What's new Search
Menu
Log in
Register
Navigation
Install the app
More options
Dark Style
Close Menu
Posted on December 7, 2016 by Matt Hough
You are using an out of date browser. It may not display this or other websites correctly.
You should upgrade or use an alternative browser.
Disappointing remake of a cult classic 2.5 Stars

This new made-for-TV version of The Rocky Horror Picture Show is a disappointing, ill-conceived misfire on the original material.

With NBC putting on several live musicals in the last few years, it came as something of a surprise when Fox announced it would be presenting The Rocky Horror Picture Show, not as a live show but as a filmed entertainment for the network. After the network’s exceptionally well-received live version of Grease, it’s now clear what a tremendous misstep this was for Fox, only the first in a series of bone-headed decisions that doomed this new version of the fabled off-kilter rock musical to the scrap heap of mediocrity. The Rocky Horror Show, born in a fringe theater in London in 1973, has always been a little off the beaten path in terms of its sexuality, eroticism, and raw if undeniably catchy music. But Fox’s TV version, subtitled “Let’s Do the Time Warp Again,” has been scrubbed of its danger, its sexiness, and its rawness, reduced now to an audience friendly family musical with lots of polish and splendor taking the place of the original show’s (and film’s) smuttiness, frankness, and edge.

After attending a friend’s wedding, engaged couple Brad Majors (Ryan McCartan) and Janet Weiss (Victoria Justice) must take refuge in an old mansion when their car breaks down during a heavy downpour. They soon learn that their host is Dr. Frank N. Furter (Laverne Cox), an omnisexual alien from the planet Transsexual who, with her servants Riff Raff (Reeve Carney), Magenta (Christina Milian) and Columbia (Annaleigh Ashford), has come to Earth to colonize but has gotten sidetracked by Earth culture and temporarily abandoned her mission. She’s attracted to both Janet and Brad, but she’s also consumed with her latest project, creating a new playmate she’s named Rocky (Staz Nair), a stunning blonde muscle boy who has a hard time adjusting to his new surroundings. An intrusion by Brad and Janet’s former professor Dr. Everett Scott (Ben Vereen) and a mutiny by some of her staff put Frank’s plans in serious jeopardy.

With the 1975 movie version an admitted cult classic and still a frequent attraction at midnight screenings despite its availability on home video for decades, remaking the feature film as an expensive TV movie musical (whose budget was likely twenty times the original film’s cost) was simply not the way to go. A live production that included the audience participation which has grown to epic proportions in the years since the film’s midnight circuit run began should have been the only reason to redo the undoable. Instead, Fox has offered a lame, limp compromise to the live Rocky Horror experience, a motley audience “viewing” the film who occasionally are inserted into the screening to react to a few selected bits of the film with their newspapers, toilet paper, and wisecracks. The motif is introduced by usherette Ivy Levan singing “Science Fiction Double Feature” to get the show off and running (the famous scarlet lips rendition of the song is used over the closing credits), but it’s an intrusive device otherwise that appears only at odd intervals and is not fully integrated into the telling of the story.

Director Kenny Ortega has hired a first-rate bunch of singing actors to play these roles, but their smooth vocals take away much of the raw, feverish exuberance from Richard O’Brien’s rock score. To its credit, the movie does include all of the best known numbers: Frank’s introductory song “Sweet Transvestite,” “The Time Warp,” Rocky’s “Sword of Damocles,” Eddie’s dynamic “Hot Patootie,” Frank’s climactic “I’m Going Home.” In the case of Victoria Justice, her Janet Weiss is much better sung than the original film’s Susan Sarandon’s Janet, so all of the numbers involving her improve on the original movie, but in every other instance, the actors’ vocals, especially in the rock numbers, are sweet and smooth instead of down and dirty making the TV version ever so much more palatable for ears unfamiliar with the raucous rock sounds of the original vocalists. This home video release to its credit does put back into the score (missing from the original film and from the TV broadcast) Brad Majors’/Ryan McCartan’s “Once in Awhile” balancing Brad’s feelings about his night of sexual experimentation with Janet’s own reaction in the famous “Touch-A, Touch-A, Touch Me.” Throughout the musical, director/choreographer Kenny Ortega uses his TV movie mantra from the High School Musical romps and other TV musicals to stage musical numbers mainly as if on a proscenium and letting the camera film from multiple angles and add vivacity through fast cutting, not a very interesting way of staging production numbers.

But the production’s biggest problem lies with its leading lady, and that’s just it: she’s a lady (transgendered though Laverne Cox may be) who’s singing a song about being a “transvestite” when she’s clearly not pretending to be anything but a woman (she’s addressed as “she” throughout the movie). Thus, any shock value in the sexual overtures Frank attempts with Rocky and Brad is now completely gone, and the one moment with Janet comes and goes so quickly that it’s meaningless, especially since Janet and Rocky eventually pair off leaving Frank and Brad in a not-so-shocking pas de deux. Worse, Laverne Cox goes out of her way to mimic the vocal inflections and timbre of Tim Curry’s speaking and singing in his original stage and film performance as Frank, so slavish a copy that it completely lacks a fresh approach on the material and leaves us feeling as if we’re watching a Curry understudy. It’s a huge role, and she’s almost always the center of attention, but it’s not the new take on the part that one should expect in a new version of the piece.

In the other roles, Ryan McCartan isn’t nearly nerdy enough as Brad, Reeve Carney as Riff Raff isn’t creepy enough nor is he fully engaged enough with his Magenta Christina Milian, a role that seems underpowered in this interpretation. Annaleigh Ashford has some funny moments as Columbia, but Ben Vereen’s Dr. Scott and Adam Lambert’s Eddie are only adequate. In a nod to the original show and film, Tim Curry has been brought in to serve as narrator, but the stroke the actor suffered some years ago has limited his facial mobility to get the most fun out of his droll commentary. Staz Nair as Rocky has the muscles for the role and sings his solo with dexterity, but whose misguided idea was it to put Rocky in gold boxers instead of a briefs or a bikini? Was it just another toning down of the material for television, or did someone actually think that’s what hypersexed Frank would have wanted to see his masterpiece sex object creation clothed in?

As with all of the other recent TV musicals on the broadcast networks, home video is only getting them in standard definition DVD, a discouraging decision. The broadcast aspect ratio of 1.78:1 is faithfully represented in this anamorphically enhanced widescreen transfer, and truthfully on a good upconverting player, the visuals are crisp, clean, and colorful with enough detail in close-ups to see hair textures and make-up applications and with no artifacts present. The movie has been divided into 24 chapters.

The same broadcast quality of the original telecast is represented in this Dolby Digital 5.1 sound mix. The musical numbers sound wonderfully vital on the soundtrack (the actors did not sing live during filming but lip-synched to their own prerecordings) filling the fronts and rears with their excellent vocals and the strong orchestrations. Dialogue has been excellently captured and appears in the center channel. Atmospheric effects (especially the crackling lightning and booming thunder in the early going) are nicely placed in the available channels.

Don’t Dream It: Make It! (9:28): director Kenny Ortega, producers Lou Adler and Gail Berman, co-choreographer Tony Testa, and the film’s stars weigh in on their characters and the work involved in bringing this new version to fruition.

The new TV-film version of The Rocky Horror Picture Show is a disappointing, ill-conceived misfire on the original material. It looks glossy and expensive and has almost all of the show’s sure-fire songs and dances, but it’s missing that necessary edge of danger and tackiness that made the stage and original screen versions such memorable and naughty fun.

I recently caught up with the new version. Rocky Horror must be fun to work and unfortunately this new version falls short on that element. The casting of Laverne Cox was in my view a great mistake as this is not a role that should be played by a transgender person as the role as played by her is not as written and takes away the edge of previous productions. Annaleigh Ashford lit up the screen and in my view was the highlight of the show.
My advice is to rewatch the original film or better still catch a live performance of Rock Horror
You must log in or register to reply here. 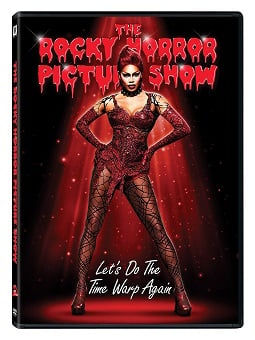