Norman Z. McLeod’s Road to Rio was the fifth of seven Road trips undertaken by two of Paramount’s top comic draws Bing Crosby and Bob Hope, and it’s among the best of their wacky adventures.

Norman Z. McLeod’s Road to Rio was the fifth of seven Road trips undertaken by two of Paramount’s top comic draws Bing Crosby and Bob Hope, and it’s among the best of their wacky adventures. All of the tried and true staples of the Road series are present: songs, slapstick, patty cake, and, of course, Dorothy Lamour at her most entrancing, and extra added attractions like the Andrews Sisters and the Wiere Brothers only make the show stronger.

Vaudeville comics and musicians Scat Sweeney (Bing Crosby) and Hot Lips Barton (Bob Hope) are wanted in several states for taking liberties with their women folk, but when their antics burn down a carnival where they’re appearing in New Orleans, they must stowaway on a ship headed for Rio. On board, they meet troubled heiress Lucia Maria de Andrade (Dorothy Lamour) who’s somehow gotten herself engaged to charlatan Sherman Mallory (George Meeker), all a plot by her scheming guardian Catherine Vail (Gale Sondergaard) who controls her ward by using hypnotism. The boys both fall for the beautiful Lucia and want to help her, but with very little money and no prospects once they get to Brazil, it’s not clear how they’re going to thwart the sinister Mrs. Vail or her vile henchmen (Frank Faylen, Joseph Vitale).

Written by Edmund Beloin and Jack Rose, the screenplay incorporates all of the familiar tropes of the series. Although we don’t get a title song this time out, we do get courtesy of songwriters Johnny Burke and Jimmy Van Heusen an opening vaudeville number for the boys “We’re on Our Way,” the usual Bing love ballad to Dorothy Lamour “But Beautiful,” the expected patty cake routines, numerous references to their being in a movie, and a Dorothy Lamour solo “Experience” (which also includes some very funny visual effects as a topper). There are amusing comic situations with the hungry boys finding a way to get a meal on board the boat by causing a passenger to become seasick and a later even more hilarious bit of business as Hope makes a mockery of a man’s face as a barber. The addition of the Andrews Sisters is a plus as they have a smashing number with Bing “You Don’t Have to Know the Language” as part of the ship’s entertainment, and later the wonderfully endearing Wiere Brothers do their instrumental tumbling act to great effect (and tag along with the boys for the rest of the movie). The end of a Road movie is always a toss-up over which of the star duo Lamour will end up with, and this one features a nifty final sight gag that offers a great payoff to one of the narrative’s most distinctive elements.

Bing Crosby and Bob Hope are both in fine fettle in the movie with plenty of throwaway gags and offering the tight teamwork that was the envy of all of the other studios of the period. Dorothy Lamour never looked lovelier than in the skin tight Edith Head creations she dons in this movie (Bob even comments that one of her gowns looks “sprayed on,” and he’s not far off the mark). Gale Sondergaard is always great playing a sinister character even if it’s for laughs as it is here. Frank Faylen and Joseph Vitale look rough enough to pass for henchmen even if all of their schemes to do the boys in always go awry. Jerry Colonna, a regular on Hope’s radio show, has a neat cameo near the end of the film. The Wiere Brothers play the innocent street musicians who get caught up in Crosby and Hope’s schemes and have a funny hat swapping set piece with the stars but should have been even more inventively used in the late scenes of the movie.

The film’s 1.37:1 theatrical aspect ratio is faithfully offered in 1080p resolution using the AVC codec. Sad to say, this is the weakest of the three black and white Hope releases offered this month by Kino. It’s from an old print (it appears to be the same transfer used on the HD-DVD release of the movie), and while sharpness is fine, the grayscale timing seems a bit darker than it needed to be. Worse, however, are the numerous dust specks and bits of debris that crop up especially in the first reel. The movie has been divided into 8 chapters.

The DTS-HD Master Audio 2.0 mono sound mix offers very good fidelity for a film of this vintage. Dialogue is always clear and easily understood, and the background music, the numerous song interludes, and atmospheric effects have been blended with the dialogue quite professionally. The soundtrack shows no signs of age-related hiss, crackle, flutter, or humming.

Hope Movie Montage (4:17, HD): excerpts from Kino’s upcoming Bob Hope features are presented in a montage: My Favorite Brunette, The Lemon Drop Kid, Road to Rio, Road to Bali, and Son of Paleface.

Among the most popular at the box-office of the Road series, Road to Rio helped Bing Crosby retain his number one placement in the list of top box office stars and earned Bob Hope sixth place on the same list for 1947. While the transfer is a slight disappointment (and Kino has inserted a still from Road to Singapore on the back cover), it looks good enough to earn a recommendation especially for those who don’t already have the film in high definition. 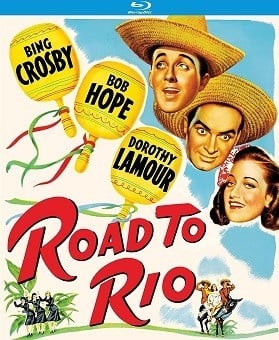