Posted on July 4, 2017 by Matt Hough
The sixth Road movie is one of the very best. 4 Stars

Road to Bali ranks among the craziest of the Road series, and even if Bob and Bing are starting to show their age a bit, their verbal antics retain a comic spark more than half a century later and make it an easy recommendation.

The penultimate Road movie starring Bing Crosby and Bob Hope, Road to Bali, is possibly the wackiest of the series (only Road to Morocco can rival it). It’s certainly the first (and only) one in color, and it features some wonderful songs and lots of tomfoolery featuring the boys who had just about the best teamwork in the business, especially for actors who only worked together sporadically and not as a permanent team.

As usual, Bing and Bob, here called George Cochran and Harold Gridley, get in trouble romancing too many women so they must get out of Melbourne as fast as possible. They sign on with Ken Arok (Murvyn Vye) as deep sea divers tasked with rescuing a chest of priceless jewels at the bottom of the sea. Landing on Batu ruled by Princess Lala (Dorothy Lamour), both men are smitten instantly, and though she begs them not to go through with the dive for fear of being killed by a giant squid inhabiting that portion of the ocean, they go through with their mission and rescue the jewels. Ken Arok, of course, was only after the gems for himself though when the trio manages to thwart him, they must escape to safety in Bali.

The nonsensical narrative by Hal Kanter, Frank Butler, and William Morrow is merely an excuse for the fellows to quip to their hearts’ content, romance the lovely Lamour (gorgeous in Technicolor), and look for any excuse to break the fourth wall and directly address the audience continually reminding us that they’re in a movie (Hope even cautions the audience that a Crosby solo is imminent and a good excuse to go out for popcorn), drop the names of a number of famous people (Errol Flynn, Sadie Thompson, Zsa Zsa Gabor, Ali Kahn, Perry Como), and welcome a series of cameo appearances to join the fun (Bing’s brother Bob, Humphrey Bogart, Martin and Lewis, and Jane Russell). The Johnny Burke-James Van Heusen song score is a very fine one indeed with notable solos for Dorothy Lamour (two separate renditions of “Moonflower”), Bing Crosby (the gorgeous “To See You Is to Love You” made even more famous by its use two years later in Hitchcock’s masterpiece Rear Window), Bob and Bing (the introductory “Chester the Trombone Man,” the novelty tune “Hoot Man”), and a great trio (“The Merry-Go-Runaround”). Director Hal Walker, no stranger to the series having directed Road to Utopia in the mid-1940s, keeps the craziness moving right along with only a couple of dips in the mirth department (the most obvious being an extended wedding sequence between the two boys that only leads to a moderately amusing payoff).

The back and forth dialogue between Bing Crosby and Bob Hope in this Road picture is probably the zenith of their work together: the quips and comebacks come fast and loose, and one feels they could if they wished extend scenes for several minutes longer with their continual ad-libs. Bing’s voice is at its mellowest in his solo, and it’s nice that Bob got to take part in three songs this time out. Dorothy Lamour was always a knockout in Technicolor (it’s no wonder she, along with Rita Hayworth and Betty Grable, were the top three G.I. pin-ups in World War II), and she gets solid opportunities here for some fun bits (the best: rescuing Bob from a burning shack). Murvyn Vye is suitably oily and sneering as villain Ken Arok. Leon Askin makes a notable appearance late in the film as high priest Ramayana along with Ralph Moody good as another villain Bhoma Da.

The film’s 1.37:1 theatrical aspect ratio is retained for this 1080p transfer using the AVC codec. While stock footage has no shortage of speckles and bits of debris, most of the footage looks clear and clean with just a few blips and specks here and there. Sharpness is good enough to notice the stars’ body doubles in various shots, and the color is quite lush and beautiful with very tan skin tones. The movie has been divided into 8 chapters.

The DTS-HD Master Audio 2.0 mono sound mix nevertheless offers good fidelity for the era. Dialogue has been wonderfully recorded and has been combined professionally with the songs and background score and the atmospheric effects (which include a storm at sea and an erupting volcano). Hiss, crackle, and flutter have all been contained and are no problem in the mix.

Audio Commentary: film historians Michael Schlesinger and Mark Evanier offer a fine treasure trove of information about most of the major players and behind the scenes personnel in the movie with only an error or two here and there (Edith Head won eight Oscars in her career, not twelve).

Hope Movie Montage (4:17, HD): snippets from the Bob Hope films being released this summer on Blu-ray by Kino: My Favorite Brunette, The Lemon Drop Kid, Road to Rio, Road to Bali, Son of Paleface.

Road to Bali ranks among the craziest of the Road series, and even if Bob and Bing are starting to show their age a bit, their verbal antics retain a comic spark more than half a century later and make it an easy recommendation. 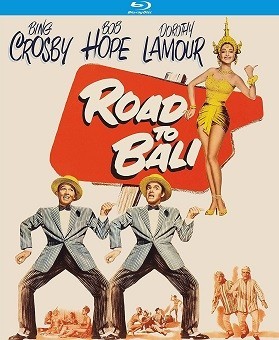