A beautifully written and compelling backstory to the original Planet of the Apes series, Rupert Wyatt’s Rise of the Planet of the Apes offers an action-filled and yet poignantly immersive story fleshed out with state of the art special effects which make the prosthetic make-ups of the original series seem quaint by comparison.

A beautifully written and compelling backstory to the original Planet of the Apes series, Rupert Wyatt’s Rise of the Planet of the Apes offers an action-filled and yet poignantly immersive story fleshed out with state of the art special effects which make the prosthetic make-ups of the original series seem quaint by comparison. Incisive performances from live action and performance-capture artists give a grounded legitimacy to the science fiction storytelling here making for one of the most memorable and involving of action-based entertainments.

Rescued from euthanasia by scientist Will Rodman (James Franco) when his chimpanzee mother goes berserk in front of a group of business investors at his lab, young Caesar (performance capture artist Andy Serkis) grows more cognizant and intelligent by the day thanks to the drug ALZ-112 administered to his mother when she was one of the apes being used to test a new Alzheimer’s drug. But Caesar’s natural bond with Will and his father Charles (John Lithgow) gets him in hot water when Charles’ rapidly deteriorating mental state causes a neighbor to attack him as Caesar springs to his defense. Imprisoned in an animal control facility run by the bordering-on-sadistic John Landon (Brian Cox) and his surly son Dodge (Tom Felton), Will has no choice but to leave Caesar there until he can figure out a way to get him back home, but Caesar takes matters into his own hands as he methodically figures out a way not only to escape himself but to also give his fellow apes a dose of the drug which can make them evolve as he has.

Rick Jaffa and Amanda Silver have written a script that plays great homage to the Apes films of yesteryear keeping their prequel as true to the story already told in the 1968 original movie (we even see the launch of the Intrepid supposedly carrying Charlton Heston to Mars which got the whole yarn off the ground) while fashioning their own history of Caesar’s rise to power as the leader of the growing, authoritative ape population. Though there are loathsome humans to be sure in their scenario, humans we fully expect to eventually meet their match for their putrid behavior and ill-treatment of the simians, the two writers keep things balanced by taking the time to show Will and Charles as compassionate, attentive care-givers to the young chimp, and director Rupert Wyatt uses every opportunity to allow us to see Caesar’s maturation in a series of wonderfully shot sequences: from his negotiating his own house (how nimbly he gets himself a cookie) to a magisterial sequence set in California’s Muir Woods as Caesar has his first real outing in a natural habitat, a sequence that allows the quick passage of five years in his life taking him to young adulthood. Writers, director, and motion capture expert Andy Serkis also fashion a series of incidents which firmly put the viewer on the side of the apes: Caesar’s drawing a replica of his bedroom window in his cell, his inevitable, overwhelming sense of abandonment, and his subsequent forthright rejection of humankind as he gains the power and respect of his peers are all magnificent to see. Of course, the climactic showdown between man and ape (special effects artists go a little too far having the chimps crashing through several inches of various plate glass windows with nary a scratch) culminating on San Francisco’s Golden Gate Bridge is the film’s most impressively sustained bit of action, but the activity after that is what’s likely to remain in the memories of viewers who should find it in equal parts touching and triumphant.

James Franco is perfect casting as the scientist, initially cold and facts-oriented and later evolving into a truly compassionate, responsive man. Freida Pinto is a rather routine but nonetheless acceptable love interest. John Lithgow skillfully maneuvers the tricky nature of Alzheimer’s with alacrity, and Tyler Labine as Will’s fellow scientist is likewise concerned and admirably noble (even if his actions do tragically plant the seeds for man’s eventual destruction). Brian Cox plays his usual steely administrator while Tom Felton continues his smugly nasty persona first made famous as Draco Malfoy here as Dodge Landon, this time with an American accent but with the same bullying, nasty disposition. As the greedy corporation head out for the money with no regard for the welfare of the lab creatures, David Oyelowo’s Steven Jacobs is predictably vile. Andy Serkis, Karin Konoval (as orangutan Maurice) and Terry Notary (who plays the mother chimp Bright Eyes and served as the stunt coordinator for the other motion capture performers) all excel as believable and individualistic simian characters.

The film’s Panavision aspect ratio of 2.35:1 is faithfully rendered in 2160p using the HEVC codec. Sharpness is excellent throughout the presentation with plenty of detail to be seen, particularly in close-ups in which the CG-originated apes look completely real with seeming natural hair, scars, and other facial features. Color is mostly rendered quite beautifully though flesh tones vary throughout the movie, sometimes verging on too brown but occasionally looking just right. The use of HDR is nicely managed giving extra pop to certain scenes especially during the initial Muir Woods sequence and in the antiseptic lab where the chrome gleams and whites sparkle. Black levels throughout are very good as well. The film has been divided into 28 chapters.

Even though the sound design on the UHD disc only mirrors the original DTS-HD Master Audio 5.1 sound mix, this encode is terrific offering an aggressive sound palette that immerses the viewer in rock solid sound envelopment throughout. Split surrounds and pans across and through the soundfield are a frequent occurrence and aid very much in bringing the action from the screen into your viewing space. Patrick Doyle’s bombastic score has been channeled through the entire soundstage, and the sound mix features incredible bass response that occasionally reaches system-threatening levels of depth. Dialogue is never overwhelmed by the sound effects and music and has been rooted to the center channel.

Audio Commentaries: there are two on the UHD disc, the only bonuses included on this particular disc: one by director Rupert Wyatt and the other by writers Rick Jaffa and Amanda Silver. Considering the number of pauses in each, it might have been better to have edited the two tracks together into a single, more viable commentary track. Wyatt pretty much praises everything he sees and offers anecdotes on various shots, actors, and situations. The writers do point out all of the allusions to previous Apes movies they’ve planted throughout the film.

All of the remaining extras are contained on the enclosed Blu-ray disc, the same exact disc that was released six years ago:

Deleted Scenes (12:00, HD): eleven scenes may be viewed individually or in montage.

Mythology of the Apes (7:11, HD): features writers Rick Jaffa and Amanda Silver, director Rupert Wyatt, James Franco, and Andy Serkis discussing the previous films in the series and how this one ties into the others.

The Genius of Andy Serkis (7:48, HD): shows behind the scenes glimpses of the actor at work in his motion capture suit and praised by actors James Franco, Tom Felton, Brian Cox, and John Lithgow as well as the film’s special effects technicians who all marvel at his expressiveness and agility.

Scene Breakdown (1:34, HD): allows the viewer to switch between the early animation, the motion capture work, and the final rendered scene for a pivotal sequence in the picture. The viewer switches between each version using the color keys on the remote and can see via picture-in-picture views how the various elements come together.

Character Concept Art Gallery: allows the viewer to choose a sketch of seven various ape characters and then see their CG personas from the film.

Composing the Score with Patrick Doyle (8:07, HD): shows composer Patrick Doyle talking about his inspirations for music cues in the film and working with a choir for certain sequences.

The Great Apes (22:37, HD): offers three mini-documentaries on the three kinds of apes portrayed as characters in the movie. They may be watched individually or together in a group.

Theatrical Trailers (6:29, HD): three trailers may be viewed individually or in montage.

Promo Trailers (HD): The Sitter, In Time, Machine Gun Preacher, Immortals, Another Earth, and There Be Dragons.

An exciting and heartrending prequel to a familiar franchise, Rise of the Planet of the Apes served as the beginning of its own series of films with the soon-to-be-released War for the Planet of the Apes coming up shortly in theaters. This richly rewarding action picture and human/ape interest story comes highly recommended in its latest UHD incarnation!

I would bite on both if they were $19.99
Reactions: dpippel

They'll hit that price point eventually. I can wait.

Hopefully before the new film comes out
Reactions: dpippel

Thank you for the review, I will be purchasing this movie on 4K UHD BD 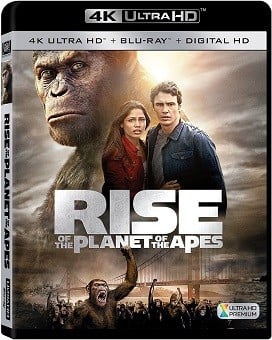