Forum List What's new Dark Style Change width
Log in Register
What's new Search
Menu
Log in
Register
Navigation
Install the app
More options
Dark Style
Close Menu
Posted on December 10, 2020 by t1g3r5fan
You are using an out of date browser. It may not display this or other websites correctly.
You should upgrade or use an alternative browser.
Finale of John Ford's "Cavalry Trilogy" gets a new Blu release 4.5 Stars

As one of the greatest directors to ever work in Hollywood, John Ford had a natural gift for storytelling that stretched back to the silent era; as a result, he is still the only director in Hollywood history to win 4 Oscars in the Best Director category. He is also best known for his longtime association with actor John Wayne; Rio Grande – the finale of the director’s “Cavalry Trilogy” – is one of their finest works together. Previously released on Blu-ray by Olive Films, the company has revisited the title with a new Blu-ray release as part of their Olive Signature line.

On the Texas frontier in 1879, Lt. Colonel Kirby Yorke (John Wayne) is dealing with a shortage of troops in the 2nd Cavalry Regiment outpost to defend settlers from a group of Apaches. Tensions further arise when his estranged son Jefferson (Claude Jarman Jr.) arrives as one of the recruits sent to help the regiment and Yorke’s wife Kathleen (Maureen O’Hara) also arrives to get Jeff out of the cavalry. However, personal issues have to be set aside when the Apaches attack the fort and head into Mexico with their rescued leader and a wagonload of children as captives. Yorke and his regiment must head across the Rio Grande into Mexico in order to save them…

Interestingly enough, John Ford had no plans to make Rio Grande since he wanted to move on from the Western genre with his personal project The Quiet Man (1952); however, it came about out of necessity when Republic Pictures head Herbert J. Yates wanted Ford to make this movie in order to secure financing for The Quiet Man (the former thinking that Ford’s personal project wouldn’t be a moneymaker – which proved to be wrong). Despite being a lower profile movie compared to more highly visible films in his canon, Ford still exhibits his masterful touch here in bringing James Warner Bellah’s story and character to vivid life. Continuing his progression in the depiction of Native Americans in a more positive light starting with Fort Apache (1948), Ford also features some Native Americans working in the cavalry in addition to the renegade Apaches that form the primary antagonists; the crux of Ford’s evolution in depiction of Native Americans in a more sympathetic light would come in his last Western and penultimate film Cheyenne Autumn (1964). To top it all off, the director makes masterful use of the Utah locations – filling in for the Rio Grande Valley of Texas and Mexico, courtesy of his Stagecoach cinematographer Bert Glennon – as well as weaving in songs by the Sons of the Pioneers with Victor Young’s music to create an indelible atmosphere permeating the movie. Although it’s still underrated outside of the fanbase of both the star and director, Rio Grande is still an exceptional western worthy of repeat viewings and warrants a larger place in each’s resume as among their best respectively.

In the 7th of his collaborations with John Ford as a star, John Wayne wonderfully reprises his role of Kirby Yorke from Fort Apache, albeit now as a lieutenant colonel; despite the slight difference in the spelling of the last name, the character is virtually the same. In her first pairing with the Duke, Maureen O’Hara holds her own against him as Yorke’s estranged wife; there’s a genuine chemistry between the two that would serve them well in four more films together, especially in The Quiet Man. Child actor Claude Jarman Jr. has one of his best grown-up role as Jeff Yorke; he previously won a special Oscar for his performance in The Yearling (1946). Rounding out the cast here are Ford favorites Ben Johnson and Harry Carey Jr. as – respectively – a fugitive trooper and a young recruit who both befriend Jeff, Chill Wills as the regiment’s doctor, J. Carrol Naish as General Philip Sheridan, Victor McLaglen as the amiable Sergeant Major Quincannon, Grant Withers as a US marshal looking for Johnson, Karolyn Grimes (little Zuzu Bailey herself) as one of the children taken captive, an uncredited Ken Curtis as the regiment singer along with the Sons of the Pioneers (which Curtis was a member of at the time of filming) and an uncredited appearance by Wayne’s son Patrick.

The film is presented in its original 1:37:1 aspect ratio, taken from a brand new digital restoration for this release. Film grain is organic, with fine details and gray scale represented faithfully; the opening credits – which were windowboxed on the previous Olive Blu-ray release – are now presented with the same aspect ratio as the rest of the film. There’s minimal instances of scratches, dirt, dust and tears present here, meaning that this transfer is an improvement over previous home video releases and likely the best the movie will ever look.

The film’s original mono soundtrack is presented on a DTS-HD Master Audio track for this release. Dialogue is strong and clear, with sound effects and Victor Young’s score (with songs by the Sons of the Pioneers) equally strong and clear without overlapping on each other. There’s minimal to no instances of issues like distortion, crackling or hissing present, meaning that this release is likely the the best the movie will ever sound on home video.

Commentary by author Nancy Schoenberger – Recorded for this release, Schoenberger talks about some of the themes recurring throughout the movie among other details about the production; there are pauses from time to time, but the track is loaded with information.

Bigger Than Life (13:10) – In this newly filmed interview, Claude Jarman Jr. shares his memories of working on the movie, which he considers his personal favorite.

Strength and Courage (10:28) – This new interview has Patrick Wayne – son of John Wayne – sharing memories of his father as well as being on the set of the movie during filming.

Telling Real Histories (13:21) – Actor Raoul Trujillo talks about the depiction of Native Americans in the movie in comparison to other Westerns of the era in this 2019 interview.

Songs of the Rio Grande (5:36) – In this brief new interview, Marc Wanamaker talks about the Sons of the Pioneers and the role their songs play in the movie.

The Making of Rio Grande (21:15) – Carried over from previous DVD and Blu-ray releases, the Leonard Maltin hosted featurette from 1992 chronicling the production of the movie; featuring interviews with actors Harry Carey Jr. and Ben Johnson and John Wayne’s son Michael.

Essay by Paul Andrew Hutton (11:11) – The essay is also available in the booklet enclosed with the disc.

Though it was intended to be a “lesser” movie for both its star actor and director in order to get the latter’s dream project made, Rio Grande is still a very well made Western that’s underrated outside of the John Wayne and John Ford fanbase but absolutely worthy of rediscovery. Olive Films had already released the movie years ago on Blu-ray, but they’ve bested that release with this edition that may just be the definitive release with a great HD transfer and a nice slate of special features included. Very highly recommended, but don’t wait since this edition is only limited to 3,500 copies available.

Thanks for this review.

I have to question your assertion that John Ford wanted to move on from Westerns. Certainly he wanted to make other types of movie as well, but he returned again and again to the Western. At that famous meeting of film directors
about signing a loyalty pledge where Cecil B DeMille was trying to oust Joseph Mankiewicz, when Ford stood up to speak he introduced himself by declaring "My name's John Ford. I make Westerns."

Thank you for your fine review, but I have to agree with Robin that Ford didn't want to move on from westerns as he made this movie because he was really trying to secure financing for his pet project "The Quiet Man". Some of his best westerns came after Rio Grande, but he was one of those directors that made fine films across different film genres. He won the Oscar for Best Director four times, but not one was for a western. Granted, that result might be somewhat attributed to the industry prejudice against westerns.

A grand total of three traditional Westerns have won an Oscar for best picture: Cimarron (1931), Dances With Wolves (1991) and Unforgiven (1992). No Country For Old Men (2007) also won for best picture, but was set in 1980. Ford's contemporary, Howard Hawks, was similarly ignored.

The Academy has snubbed a lot of excellent directors
A. Hitchcock and O. Welles among many ...

This was one of a couple of titles that got severely delayed on the way to me. I should have it quite soon though and look forward to watching it.
You must log in or register to reply here. 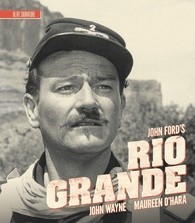