The image of Samara, drenched and contorted, emerging from a television screen, remains powerful horror iconography, but without the mystery and mythos that comes from a compelling story, the potent imagery loses luster. Rings, therefore, dulls the glow of Samaraâ€™s potency to barely a cheap-screen flicker. With nothing new to add or competently say, there is no compelling reason for Rings to exist, and audiences largely felt the same way. This franchise was dormant far too long to pin hopes of revival on a sequel. A reboot for the digital age would seem to have been the better path (or better yet, take a risk on a new idea altogether).

“I keep… thinking about this story. There’s this video that… kills you. Seven days after you watch it. The second it’s over… the phone rings. And this voice says…”

When Julia (Matilda Anna Ingrid Lutz) loses contact with her boyfriend, Holt (Alex Roe) away at college, she decides to investigate. When she finally tracks down her boyfriend, she uncovers a bizarre secret involving an untrustworthy professor (Johnny Galecki) and a video that, when watched, will lead to your death after seven days. Students are dying and when she watches the video for herself, she is marked and has seven days to uncover the mystery behind the unusual visions that she is seeing.

Rings stumbles from the outset and is never able to stable itself long enough to make a mark. What should have been reborn for the digital age inconceivably slips into back into analog and stretches credulity as a result. Sure, there are some ideas, notions really, that are introduced and hold promise, but they are never embraced as the film sinks back into the safe zone or covering similar ground in familiar ways. With nothing new to say, Rings has no real reason for being.

The potential franchise fizzled out with the first disappoint sequel (The Ring Two) which failed to adequately stand on the tall shoulders of Gore Verbinski’s excellent first film (itself, a remake). That first sequel failed for several reasons, but largely because there was little by way of new, fertile ground to take the series. Rings reinforces that theory, and while it does find a little new ground, it is not fertile enough. It is meandering and what little interest sparked from its potential is left woefully unexplored. It has nothing interesting to say about the mythology, and it has nothing intriguing to say about us, society, and our ubiquitous online social media presence (the film touches upon this, but should have made this central, not peripheral).

The cast seems anemic, with no standouts (a sad result when you have the likes of Vincent D’Onofrio in your line-up). Johnny Galecki does quite well to be impressively different from his character on The Big Bang Theory, but he is given a good set up without a good payoff, making him little more than a crutch in the story. The film’s two young leads, Matilda Anna Ingrid Lutz playing Julia, and Alex Roe playing Holt, are poorly written and forgettable teen characters in a series that was always better when it avoided the typical ‘college kids trapped in a horror film’ premise. With so many years since The Ring Two, the disconnection from the main storyline is both a blessing and a curse. Too few will remember the core details of Samara, and that gives some leeway in how this story plays out â€“ but connection to that backstory would have made it make more sense, perhaps, and those that do recall the details will feel that this new interpretation of the backstory fumbles what we already knew in search for something more to be wrung from that history.

Director F. Javier Gutierrez and cinematographer Sharone Meir remain quite faithful to the look of the series, but where Verbinski’s grey and muted blue palette served the story, or rather the tone and mystery of the story â€“ in Rings it finds no way to become part of the fabric of the piece and instead lays upon the film in an ancillary way â€“ not at all organic to the experience. Some of the scares are reasonably effective, at least one twist is reasonably earned, and composer Matthew Margeson’s treatment of Hans Zimmer’s themes established in The Ring is faithful but not slavish. But these positives aren’t nearly enough to overcome the heavy faults.

Rings comes with a handsome High Definition presentation courtesy of Paramount. An effective, organic-looking digital production that produces excellent detail even with the heavy blue-grey-green tint that saturates the overall look of the film. And the film is quite dark, but thankfully details emerge and are never swallowed by the effective dim-lighting. Technically without flaw.

Rings excels in the audio department with a fully realized 7.1 DTS-HD Master Audio track that shakes, surrounds, immerses, Â and punctuates the watching experience very well. Matthew Margeson’s score, which examines and expands a little upon Hans Zimmer’s terrific score from the original film in this series, is nicely represented in the audio, and the front-heavy dialogue is without issue. While the film disappoints, the video and audio quality certainly do not.

A light collection of special features that scratch the surface. Resurrecting the Dead is perhaps the better of the small assortment on offer.

Terror Comes Full Circle – A general look at the production.

Resurrecting the Dead: Bringing Samara Back – Short feature on the Samara character, recreating her look and performance

Deleted/Extended/Alternate Scenes – Nearly 19 minutes worth of cut scenes and moments.

Digital/Ultraviolet Copy of the Film

Rings is a disappointment. As silly as the premise is, The Ring sold it with a strong and compelling performance from Naomi Watts, terrific production design, and the keen storytelling and visual sense of its director, Gore Verbinski. Gore was also working from a good script, which is really where Rings fails. It wants to recreate the parts that worked of the previous films, but in doing so robs itself of its voice and potential. It fails to adequately refresh the viewer on the core Samara backstory, then fails to take the concept at the heart of this film series into genuinely new spaces (except in the closing seconds), and disappointingly never commits to any of the potentially good ideas that are, at best, half-explored during the film’s runtime. 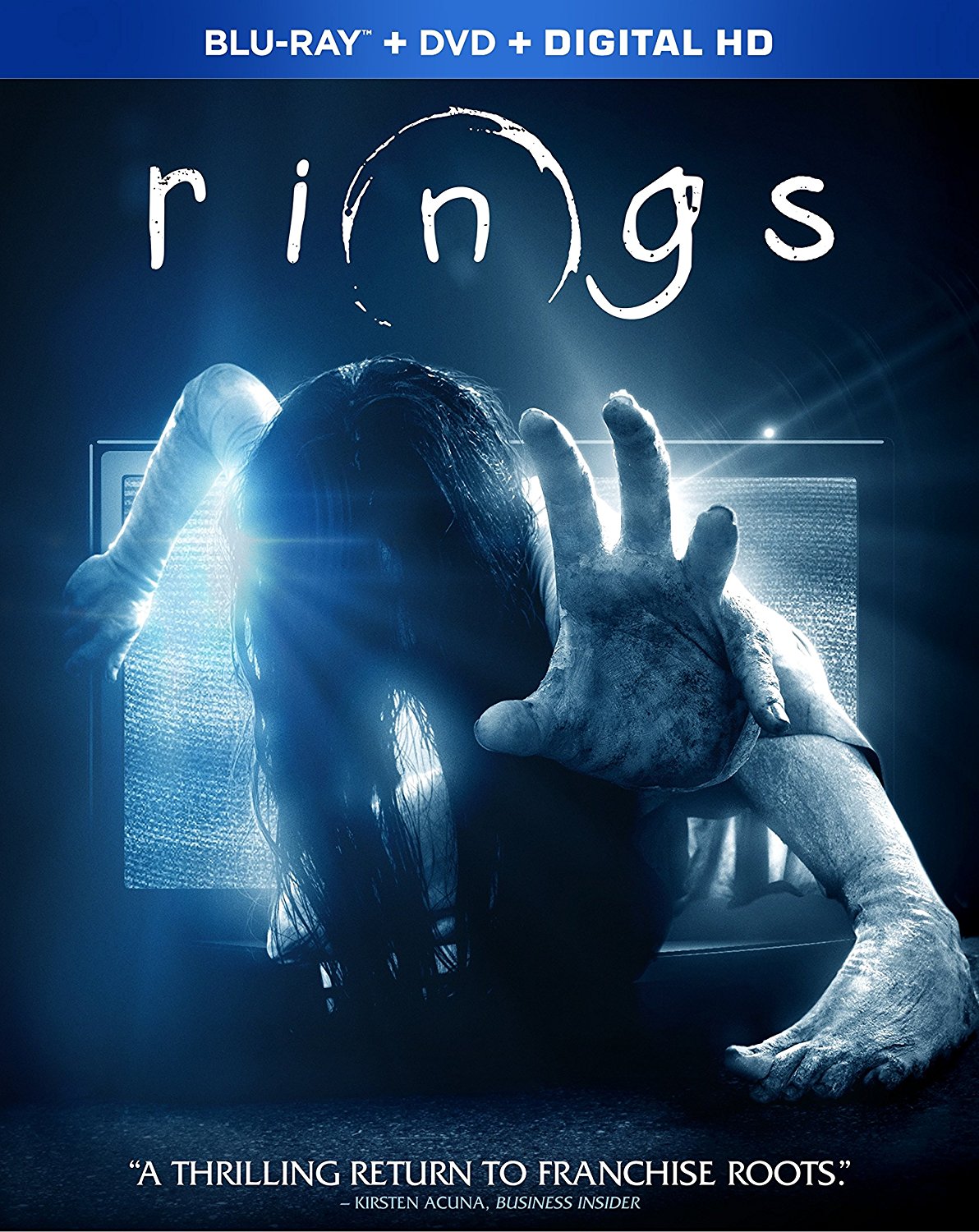