A mildly entertaining sequel to one of the studio’s bigger hits of the 1970s, Return from Witch Mountain offers the expected Disney-flavored comedy and thrills in a fairly diverting adventure.

Extraterrestrials Tia and Tony return to Earth for another upsetting encounter with humans in the Disney-produced kiddie adventure Return from Witch Mountain directed by veteran John Hough. Snagging two of the movie’s most famous mature stars to lead our two young aliens down the garden path, Return from Witch Mountain doesn’t measure up to the original film in the series (Escape to Witch Mountain) and with fewer of the character actors around to give the movie a familiar face for Baby Boomers, this unnecessary sequel lumbers along with only a bit of fun with the special effects to distinguish it.

Brought back to Earth for a vacation in Los Angeles by their Uncle Bene (Denver Pyle), Tia and Tony (Kim Richards and Ike Eisenmann) get waylaid from their destination when Tony’s telekenesis powers aid Mr. Sickle (Anthony James) who has plunged off the roof of a building in an accident with a malfunctioning scientific mind control device invented by the devious Dr. Victor Gannon (Christopher Lee). When Gannon sees what Tony can do with his mind, he kidnaps him and installs a mind control device on him knowing that Tony’s abilities can bring him the world-altering power he craves. Gannon’s financial partner in his enterprise, Letha (Bette Davis), is only interested in the money that Tony’s powers can return to her bank account. Meanwhile, Tia is frantically searching for Tony whose thoughts are being blocked by Gannon’s device, and she turns to a scrappy street gang (Christian Juttner, Brad Savage, Poindexter Yothers, Jeffrey Jacquet) for assistance.

The script by Malcolm Marmorstein takes a number of detours along the way before we get to the heart of Gannon’s plan: to take over a plutonium plant and control the substance used in ever-greater nuclear bombs. Letha’s greed is so all-consuming that she takes Tony to a museum housing a $3 million gold exhibit with the intention of stealing it, and the melee that results there is one of the film’s most amusing set pieces (though it never convinces for a second that it’s a museum; we’re clearly on a large soundstage set). The ridiculously dangerous chase that follows (nicely directed by John Hough and abetted with the patented Disney special effects) is one of the few in a Disney comic adventure that really puts children in real jeopardy (the gang has been picked up by the school truant officer – Jack Soo – but Tia is controlling the van in its pursuit of the car where Tony is being held), and the resultant wreck is quite harrowing even though, of course, the children emerge without a scratch, but the van is totaled (though, naturally, with the powers of the two aliens, that problem eventually gets remedied). The movie loses momentum during Tia’s stay with the very youthful gang in their headquarters (a dilapidated old mansion), and even with the insertion into the story of a goat named Alfred and a gabby cabby (Dick Bakalyan), the movie doesn’t live up to the laughs and thrills of the original film. The special levitation effects, however, are much better achieved this time around with many fewer visible wires in the high definition picture.

Kim Richards and Ike Eisenmann are reprising their roles from the original movie, but they’ve matured quite a bit from the first film without gaining anything positive in the acting department. Bette Davis may have snared top billing in the film, but Christopher Lee walks away with acting honors playing the scheming rat with an increasing sense of desperation and cunning as the movie progresses. Miss Davis’ clipped diction and frustrated pleas for money make her a rather disappointing henchwoman. Jack Soo and Dick Bakalyan do great with their bits, and Anthony James is an okay mob assistant. The young performers who make up the least lethal street gang in the history of movies – Christian Juttner, Brad Savage, Poindexter Yothers, and Jeffrey Jacquet – are all right as would-be hooligans, just right for a Disney family adventure.

The film has been framed here in the 1.66:1 aspect ratio and presented in 1080p using the AVC codec. Sharpness levels look unpromising in the early process and optical special effects scenes, but once the youngsters make their appearance, things begin to look a great deal better. Film grain has been retained in the transfer, and close-ups reveal in much detail the extent of make-up and eye liner on Miss Davis and some of the other actors. Color is solid and nicely sustained once past those opening shots, and skin tones are completely natural and appealing. Contrast has been well maintained throughout the presentation. No age-related problems with scratches or dirt are present. The film has been divided into 12 chapters.

The Dolby Digital 2.0 sound mix is decoded by Dolby Prologic into the center channel. Though lacking in much of a low end, the mix is typical of its era with dialogue well recorded and nicely balanced with the Lalo Schifrin disco-flavored score and the atmospheric effects all working together smoothly. No age-related problems with hiss, crackle, or flutter are present.

There are no bonus features offered on this Disney Movie Club Exclusive release.

A mildly entertaining sequel to one of the studio’s bigger hits of the 1970s, Return from Witch Mountain offers the expected Disney-flavored comedy and thrills in a fairly diverting adventure. This movie is offered as part of the Disney Movie Club (www.DisneyMovieClub.com) though you can certainly find it offered for sale with varying premium prices at Amazon (see below) and through other marketplace sellers.

Based on the time frame, I wonder if Bette Davis was on the set of this movie the day Joan Crawford died.

MatthewA said:
Based on the time frame, I wonder if Bette Davis was on the set of this movie the day Joan Crawford died.
Click to expand... 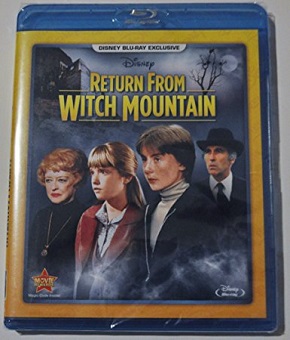