Following the success of The Return of the Living Dead (1985), it seemed inevitable that a sequel would follow. However, the followup – Return of the Living Dead Part II (1988) – can be seen as an example of the ‘sophomore slump’ that some movie franchises experience. While there are some moments of effective humor and horror, the whole result is a mixed bag that pales in comparison to its predecessor.

In the Southern California community of Westvale, a young boy named Jesse Wilson (Michael Kenworthy) discovers one of the “easter egg” Army canisters that caused so much trouble in Louisville in the first movie in a sewer near his home. When his two mischievous friends open up the canister, they end up releasing the Trioxin chemical that spreads into the nearby cemetery where grave robbers Ed (James Karen), Joey (Thom Mathews), and Brenda (Suzanne Snyder) are procuring cadavers. In due time, the dead start rising from the grave, leaving Jesse, his sister Lucy (Marsha Dietlein), the cable guy Tom (Dana Ashbrook), and the grave robbers trying to stay alive while trying to keep their wits (and brains) intact from the undead horde that overruns the town.

While the first movie was very sharp in both humor and horror, Return of the Living Dead Part II isn’t as sharp in either department, leaving behind an uneasy feeling of squandered potential that wasn’t capitalized. Much of the reason is that writer/director Ken Wiederhorn tries for a much broader approach in applying humor to the horror with middling results; it’s not that Wiederhorn was a poor choice of director – he had previous experience in the horror genre with Shock Waves (1977) and Eyes of a Stranger (1981) – it’s just that he seems ill-equipped to wrest together comedic and horror elements into a cohesive whole like Dan O’Bannon did with the first movie or like Sam Raimi did with the Evil Dead movies. There are some effective moments of dark comedy – the bifurcated zombie in the hospital trying to put himself back together is one effective sight gag – but for the most part, the attempts just don’t hit their mark with the same frequency. However, there’s stark camerawork by future Oscar winner Robert Elswit, effective makeup effects by Kenny Myers (which contribute to some of the movie’s more memorable moments), and a solid score by J. Peter Robinson, with the likes of Robert Palmer, Anthrax, Mantronix, and Leatherwolf contributing to the soundtrack, so it’s not a complete and total loss here either.

Michael Kenworthy makes for an effective Jesse, giving him the role that he’s most recognized for in his brief acting career. James Karen and Thom Mathews make welcome returns as both Ed and Joey, respectively; their banter between them as well as their fates bear some resemblance to their roles in the first movie – only here Karen’s character doesn’t cremate himself. Marsha Dietlein comes off as the better of the two female leads here as Suzanne Snyder basically functions in the same role that Beverly Randolph had in the first ROTLD movie; Dana Ashbrook is mostly adequate as the heroic type of the group while Phil Bruns functions as comedic relief as the doctor. Other notable appearances include Jonathan Terry reprising his Col. Glover role from the first movie in a brief cameo, Brian Peck (also a carryover from the first) in a number of appearances as zombies – notably the Michael Jackson zombie, Forrest J. Ackerman and Doug Benson as zombies, Allan Trautman as another Tarman zombie, and Mitch Pileggi as an Army sergeant on patrol in the deserted town.

Taken from a 2K scan of the interpositive performed by Warner Bros., the Blu-ray transfer far surpasses the DVD in terms of quality. Grain structure is organic with a sturdy color palette containing solid blacks, even skin tones, and minor to no instances of film artifacts like scratches, speckling, dirt, dust, or reel markers. Overall, this is by far the best the movie has ever looked on home video; our very own Robert A. Harris has also chimed in on the transfer here.

The film’s original soundtrack is preserved and presented on a DTS-HD 2.0 Stereo soundtrack for this release. Dialogue is strong and clear and J. Peter Robinson’s score has solid fidelity too; there’s little to no cases of hissing, crackling, popping, or dropout in terms of quality. The altered soundtrack from the previous Warner Bros. DVD is also presented here as an alternate 2.0 DD track – for completist’s sake – but the original is the way to go here, as it marks the first time it has been presented intact on home video.

Commentary by Suzanne Snyder – Newly recorded for this release and moderated by Michael Perez (the executive producer of the More Brains! documentary), the actress – who played Brenda in the movie – shares her memories and feelings on the movie. The track is more laid back than the other commentaries, but is still entertaining enough.

Commentary by Gary Smart & Christopher Griffiths – Newly recorded for this release, the author of The Complete History of The Return of the Living Dead and filmmaker engage in a lively discussion about the movie, sharing some strengths and weaknesses about it. Probably the better of the two new commentaries on this edition.

Commentary by Ken Wiederhorn & Thor Van Lingen – Carried over from the Warner Bros. DVD release of the movie, the writer/director and one-time actor (who played Billy) share anecdotes on the production itself. Still probably the best commentary track on the movie.

The Laughing Dead (19:21) – A newly recorded interview with Wiederhorn in which he discusses his aims and shortcomings with the project.

Undead Melodies (12:48) – A newly recorded interview with composer J. Peter Robinson, which has him discussing his career and his work on the movie.

Back to the Dead: Effects of Return of the Living Dead Part II (25:00) – a new featurette in which makeup artists Kenny Myers, Andy Schoenberg and Mike Smithson discuss their memories of and the trials of creating the zombies for ROTLD Part II.

Troy Fromin interview (2:10) – A new and brief interview with the actor who played the pot smoking Army truck driver at the beginning of the movie.

They Won’t Stay Dead: A Look at Return of the Living Dead Part II (29:44) – Carried over from the More Brains! DVD release, this covers the production of the second movie of the franchise with interviews with James Karen, Thom Mathews, Suzanne Snyder, Kenny Myers, Michael Kenworthy, Brian Peck, and Allan Trautman, all of whom appeared in the movie. It also includes interviews with cast and crew members of the first movie.

Vintage Featurette – Live from the Set (5:35) – Taken from the original EPK, this is a behind-the-scenes look at the production with interviews with Ken Wiederhorn, James Karen, Thom Mathews, and Kenny Myers.

Archival Interviews (2:36) – Additional/extended interviews with Wiederhorn, Karen, Mathews, and Myers that wasn’t used in the featurette.

Behind-the-Scenes Footage (4:14) – More footage from behind-the-scenes that wasn’t utilized in the featurette.

Still Galleries – Two galleries are presented here: one containing 20 stills of promotional material and 70 of behind-the-scenes and makeup provided by Kenny Myers and Mike Smithson.

All in all, Return of the Living Dead Part II is a middling and uneven entry in the horror franchise spawned by the success of The Return of the Living Dead; it barely made back it’s budget at the box office while being blasted by critics during its initial run. Yet, it has attained a small cult following over the years, and Scream Factory’s Collector Edition is made to order to satisfy fans of the movie while giving others a chance to reappraise the film. Another quality effort by Shout/Scream that shows in all aspects. 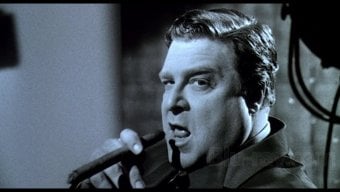 This movie is awful!
Expand signature
No matter where you go, there you are.

Cardinals73 said:
This movie is awful!
Click to expand...

I think "awful" is harsh, but "uninspired" feels apt.

It's not a terrible movie, but it ain't good, either!
Expand signature
Colin Jacobson
http://www.dvdmg.com
Reactions: Randy Korstick

It's not a terrible movie, but it ain't good, either!
Click to expand...

That was my feeling as well. It just felt like it was trying too hard to emulate the same style of the original.
Expand signature
"I don't expect anything from you, except to die and be a very cheap funeral. You're gonna die now!"

It's not a terrible movie, but it ain't good, either!
Click to expand...

The 80's had some good horror movies but it amazes me how every 80's horror movie no matter how bad seems to get a blu ray release and seems to sell. This one isn't very good but there are many far worse 80's horror films already released on blu ray. So many awful 80's horror being released that I remember everyone making fun of working in video rental stores back in the late 80's. My guess is the people buying these were kids in the 80's and have fond memories of watching these back then but I bet many of them are surprised at how bad some of these films are when they revisit them today.
Expand signature
...When you eliminate the impossible whatever remains, no matter how improbable, must be the truth
Reactions: TravisR

This has release has massive audio problems, I'm not sure if Warner or Shout is to blame. Turns out the original audio track was ripped from a VHS tape. 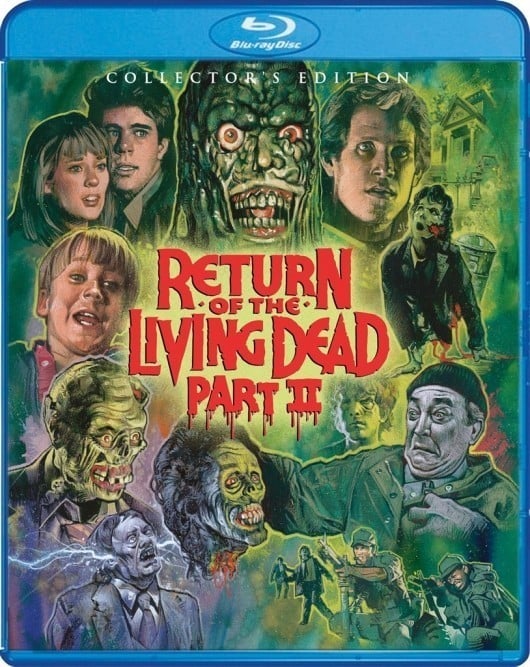