Dan O’Bannon’s directorial debut, The Return of the Living Dead, finally gets the Collector’s Edition treatment it deserves from Scream Factory, with a new transfer and special features that span two Blu-ray discs.

While taking Freddy (Thorn Matthews), his new stock boy, on a tour of Uneeda Medical Supply, Frank (James Karen) shows off a group of drums that were misrouted by the Army containing the remains of zombies from the event in Pittsburgh that inspired the film Night of the Living Dead. In doing so, the two accidentally release the zombifying gas from one of the drums, causing them to call their manager, Burt (Clu Gulager). When one of the cadavers comes to life and attacks them, Burt decides to hack it to pieces and haul them over to the funeral home next door, talking mortician Ernie (Dan Calfa) into incinerating them in the crematorium. The ashes and smoke quickly turn to acid rain, drenching the adjacent cemetery where Freddy’s punk friends are hanging out. As the acid rain makes it way deep into the soil, rotting corpses suddenly spring to life, digging their way out of their graves and attacking at first Freddy’s pals who quickly take cover in the funeral home, and then the entire town.

Dan O’Bannon’s The Return of the Living Dead not only introduced audiences to a new sub-genre that would become the zombie comedy, but changed many of the elements of zombie canon that had been introduced by George Romero in his series of Dead films. Zombies now craved not only flesh, but more specifically, brains. The creatures were not restricted in their movements, they could actually move very quickly and overtake a human. And, of course, they could speak. The film also introduced audiences to the punk rock culture. Sure, each of Freddy’s friends were stereotypes, but O’Bannon made sure they remained interesting. The writer-director also kept a current of humor running just below the surface, which helps the film play as fresh today as it did back in 1985. James Karen, best known at the time as the developer of Cuesta Verde Estates in Poltergeist and as the spokesperson for Pathmark supermarkets, literally steals almost every scene he is in, almost relishing in the underlying humor. Clu Gulager is another standout, barking orders and taking charge when you know it’s not going to end well for him. The rest of the cast are also fine, possibly benefiting from the rehearsals that O’Bannon held just before principal photography. The Return of the Living Dead is both scary and funny at the same time, and that is not an easy feat.

According to the liner notes, Scream Factory managed to work from a new 2K scan of the Interpositive, resulting in a much cleaner and more stable image than previously available on home video. This new transfer was compressed using the AVC codec, and retains the film’s intended 1.85:1 theatrical aspect ratio. Colors are more consistent, with slightly increased detail and better contrast that the previous MGM release. This is an older film shot quickly on a low budget, and in some of the darker sequences film grain can be a problem, resulting in somewhat crushed blacks, but those are few and far between, and hardly noticeable. This is a definite upgrade.

Scream Factory has included three soundtrack choices on this release, all in DTS-HD MAster Audio. For purists, there is the original mono theatrical track in 2.0. They have also included 5.1 and 2.0 stereo mixes. The 5.1 contains some discrete surround effects and a deeper low end thanks to a dedicated LFE channel, but the dialogue does sound like it may have been mixed a bit too low, never enough where it gets drowned out, but enough for someone not familiar with the film to want to possibly back up occasionally and turn on the subtitles. Dialogue is a bit stronger on the 2.0 stereo mix, but lacks the low end punch, particularly in the punk rock songs, that give the 5.1 the upper hand.

Disc One:
Audio Commentary with Gary Smart and Chris Griffiths: Smart, the author of The Complete History of The Return of the Living Dead and Griffiths, director of the upcoming documentary You’re So Cool Brewster! The Story of Fright Night, are big fans of this film, and discuss the history and various portions at length. **New to this edition**

Zombie Subtitle Tracks: What the zombies are thinking and what they are saying.

Still Gallery (1080p; 7:21): A collection of posters, lobby cards, movie stills, and behind the scenes photos.

Disc Two:
More Brains: A Return to the Living Dead (1080p; 119:43): A very comprehensive and excellent documentary on the making of the film, featuring interviews with key cast and crew members. **New to this edition**

Party Time: The Music of The Return of the Living Dead (1080p; 29:31): Many of the musicians who contributed songs to the film are interviewed. **New to this edition**

The Return of the Living Dead Workprint (480i; 108:05): For the true die-hard fans of the film only, this workprint is from various sources, mostly several generations removed VHS.

Dan O’Bannon’s horror-comedy finally gets the collector’s edition treatment it deserves, and the new 2-hour documentary is worth the upgrade alone. Recommended. 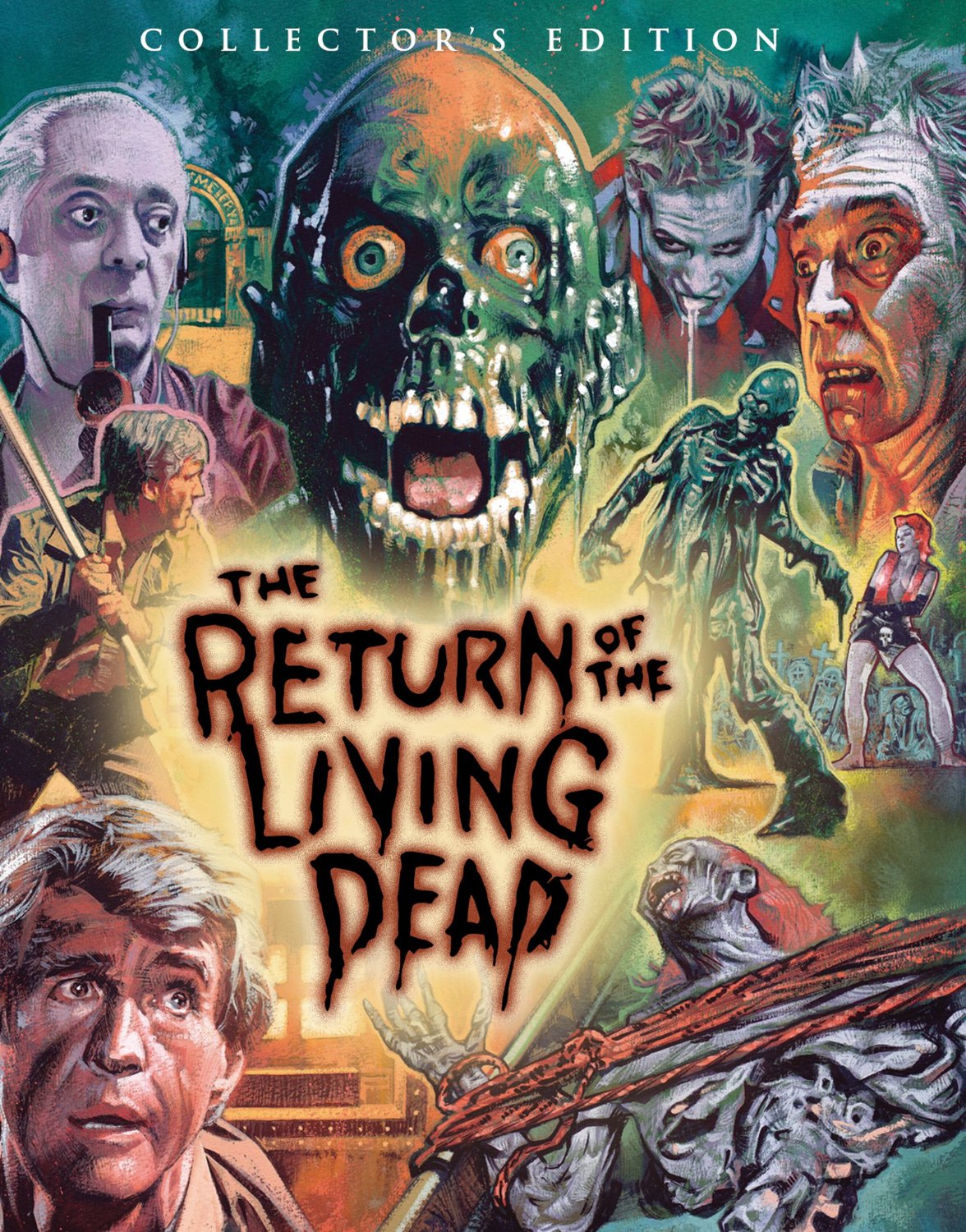