In the early 1960’s, director J. Lee Thompson had a couple of breakthrough hits on the international stage; the success of both The Guns of Navarone (1961) and Cape Fear (1962) helped him gain entry in Hollywood as well as the upper echelon for directors. Returning to England, Return from the Ashes is a thriller in the mold of the works of Thompson’s fellow countryman, Alfred Hitchcock. MGM previously released this on MOD DVD, but Kino has licensed the film of its Blu-ray debut.

Returning to Paris under an assumed identity as Mme. Robert at the end of WWII, Dr. Michele Wulf (Ingrid Thulin) is disfigured from the time spent at a concentration camp and looking to reunite with her husband, chess master Stanislaus Pilgrin (Maximilian Schell). After undergoing plastic surgery to restore some of her looks, she encounters Stan by chance and is surprised by her appearance; even more surprising is that Stan has taken up with Michele’s stepdaughter Fabienne (Samantha Eggar) during her absence, and Fabi harbors a grudge against Michele for the absence and neglect. This sets in motion a plan that will take a final and unexpected turn.

Based off of the novel by Hubert Monteilhet, which would be filmed again years later with some changes as Phoenix (2014), Return from the Ashes is certainly a solid effort in the suspense genre. J. Lee Thompson – who was no stranger to this area, given his success with Cape Fear – does a great job of setting up the characters and establishing tension and mood. However, the fuzziness that sometimes surrounds the characters and their true motives does sometimes interfere with sustaining interest; it’s probably the main weak point with this movie and Julius J. Epstein’s script, which had to eliminate some of the more darker overtones of the novel. Other than that, the movie is still engrossing enough to warrant a look, given the sturdiness of Thompson’s direction and some solid performances from the cast. It’s no classic masterpiece, but Return from the Ashes still has some value as entertainment and some nice twists too.

As the woman who survives WWII and finds herself in another diabolical plot, Ingrid Thulin is quite convincing as Michele; though better known for her many collaborations with Ingmar Bergman, this is one of her better performances outside of the Bergman canon. Maximilian Schell, playing the fortune hunting chess whiz, makes for a solid lead as the object of affection that is a source of tension between mother and stepdaughter; he was still relatively fresh off of an Oscar winning performance in Stanley Kramer’s Judgment at Nuremberg (1961). Herbert Lom has a decent supporting part as Michele’s colleague who still carries a torch for her, while Samantha Eggar is both luminous as well as wicked as the resentful Fabi. The strength of these core four performances lends some credibility to what would’ve likely been a very outlandish and farfetched story.

The film is presented in its original 2:35:1 aspect ratio for this release, taken from a brand new 2K transfer. The movie opens with the original hexagonal UA logo at the beginning, with film grain organic, fine details rendered faithfully and a equally faithful representation of the blacks, grays and shadows. There’s minimal instances of issues like scratches, tears, and dust, making this likely the best the movie will ever look on home video and an improvement over the MGM MOD DVD.

The film’s original mono soundtrack is presented on a DTS-HD Master Audio track for this release. Dialogue and the sound mix are both clear and strong; John Dankworth’s score is also given a faithful presentation with great fidelity and clarity as well. There’s next to no problems present like distortion, hissing or crackling present, which means that this is another improvement over the MGM MOD DVD and likely the best movie will ever sound on home video.

Only the film’s original theatrical trailer (2:24) is included here, in addition to several trailers for other KLSC releases.

Return from the Ashes is a solid entry in J. Lee Thompson’s resume, even though it might toy with credibility from its plot. Kino has done a decent job with the movie, giving it a solid presentation in both the audio and visual department. While a commentary going over some of the movie’s background would’ve been nice, the strength of the transfer is enough to warrant a recommendation as an easy upgrade over the MOD DVD. 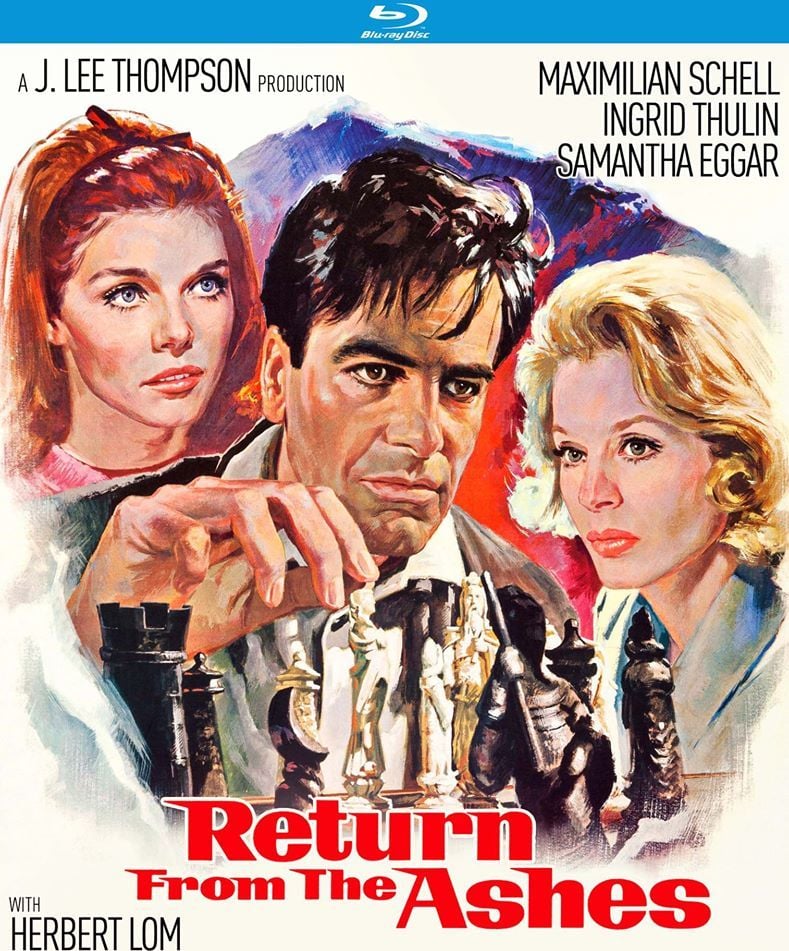