Dallas Jenkins’ The Resurrection of Gavin Stone is a completely predictable if not unengaging faith-based comedy-drama.

Dallas Jenkins’ The Resurrection of Gavin Stone is a completely predictable if not unengaging faith-based comedy-drama. With a banal plot enlivened with attractive performers doing the best they can with such uninspired material, The Resurrection of Gavin Stone doesn’t earn any marks for originality but remains a pleasing little time passer for those with undemanding tastes.

Hollywood child star-turned-bad boy Gavin Stone (Brett Dalton) trashes a hotel roof garden badly enough to earn him two hundred hours in community service which he chooses to work off at his hometown Masonville Bible Church as a custodian. During his duties, he notices auditions going on for a stage production of the Christ story being directed by the pastor’s (D.B. Sweeney) daughter Kelly Richardson (Anjelah Johnson-Reyes). Because of his years of experience in acting, he’s naturally the best of those who audition and is given the part of Jesus even though he knows nothing about the man or the faith he represented. Gavin’s experiences researching the role help him not only gain empathy with his fellow actors and director but also help to rebuild some bridges with his estranged father Waylon (Neil Flynn), but the pull of Hollywood in terms of some lucrative offers may sidetrack his own road to redemption.

The screenplay by Andrea Nasfell doesn’t find much new in the offing for her story. Jack’s wholly egocentric take on the role in the early going provides easy laughs from the outset, but it’s the quieter, more personal scenes with various members of the company (a pizza get together with three guys who are awed by his talent, a lovely give and take in sign language with a deaf student, a casually slow gliding into romance with director Kelly) that give the film its heart and make us root for Gavin’s “resurrection.” Of course, there is always that evil Hollywood lurking in the background ready to drag back the reformed Gavin into its drug-fueled clutches, and a late film temptation of a big payday TV gig couldn’t be more foreseeable. That Hollywood stint does allow director Dallas Jenkins some rare moments of chic as we see Gavin’s struggles with his conscience and his demons through the lens of the camera on-set as his irritable director (Christopher Maleki) waits to see Gavin’s dissipation reflected through the lens of his camera. The excerpts we see of the Passion Play in rehearsal and performance look very dynamic and expensive especially for a hometown church in Masonville, Illinois, but one must obviously afford this Vertical Church Films production a bit of dramatic license.

Brett Dalton lends obvious physical and emotional charm to his title role even if it stretches credulity that someone who researched church etiquette on the internet in order to pass as a Christian wouldn’t have also researched Jesus Christ, too, to know something about the role he was going to be playing. Struggling with alcohol addiction in that Hollywood scene shows there are some depths to his acting that this superficial script would only scratch the surface of, but he undoubtedly rises to the occasion in his role. Neil Flynn as his gruff father likewise offers a strong, solid portrayal as a widower struggling to reconnect with his son and with the world. D.B. Sweeney presents a kinder, gentler performance than is his usual wont as Pastor Allen Richardson. Anjelah Johnson-Reyes does fine as the nominal love interest, but this is a chaste affair indeed with not even a kiss passing between the lips of the two leading players. Former wrestler Shawn Michaels (yes, the picture is a co-production with the WWE Studios) plays a biker-turned-mechanic who’s found Christianity, one of three men playing disciples (the others are performed by Tim Frank and Patrick Gagnon) who look on Gavin as an acting role model and company leader. Tara Rios as the stage manager, Kirk B.R. Woller as Gavin’s demanding agent/manager, and Christopher Maleki as the manic Hollywood director all get their moments to shine and do well with them.

The film’s original theatrical aspect ratio of 1.85:1 is presented in a 1080p transfer using the AVC codec. Sharpness is just fine throughout the presentation though details aren’t as razor-edged as in some high definition presentations. Color saturation levels are lifelike and appealing with very believable skin tones. Contrast has been consistently applied to offer a first-rate picture. The movie has been divided into 20 chapters.

The DTS-HD Master Audio 5.1 sound mix is more than adequate but not exceptional. Dialogue has been well recorded and has been placed in the center channel. The music by Jeehun Hwang gets the majority of the surround placement in the mix with atmospheric effects rather tame and mostly found in the front soundstage.

Deleted Scenes (2:38, HD): two scenes may be viewed separately or together.

Cast Interviews (33:16, HD): producer Pastor James MacDonald and his son Landon interview four members of the cast: Shawn Michaels, Anjelah Johnson-Reyes, Brett Dalton, and Tara Rios. They each talk about their own Christian experiences while discussing issues of faith, love, and forgiveness.

The Resurrection of Gavin Stone won’t earn any points for originality or dramatic intensity, but for something family-oriented and fairly innocuous, it’s a pleasant way to spend ninety minutes. The Blu-ray offers better than average picture and sound with some faith-based bonuses for those interested. 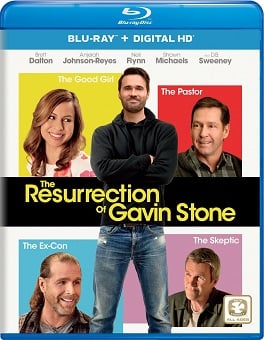