To get audiences ready for the sixth and “final” installment in the Resident Evil movie franchise, Sony has remastered the fourth (and most successful) film, Resident Evil: Afterlife for the 4K UHD Blu-ray format, including a new Dolby Atmos mix. There are no new extras on the disc (those can be found on the original Blu-ray release, also included), and the 3D version has not been included.

To be honest, I have never watched any of the Resident Evil movies, nor have I played any of the video games the movies are based on. So, when Sony sent me the fourth film in the franchise, Resident Evil: Afterlife, on 4K UHD Blu-ray for review, I was a bit hesitant to sit down and watch it, as I was not familiar with the story line and thought I would be lost from the get go. For the most part, I was correct in my assumption. Although the movie does open with a brief prologue depicting the outbreak of the T virus in Tokyo with some voice-over narration by Alice (Milla Jovovich), it quickly fast forwards four years later and the next thing I know, multiple Alices are doing battle against soldiers from the Umbrella Corporation. Why, I have no clue (I found out later through the commentary and special features that they are clones, but still doesn’t explain WHY or HOW they got there). Oh, and all of her clones apparently have some sort of superhuman powers, giving them the ability to move at breakneck speed and move items at will. It doesn’t matter, because during the real Alice’s escape, Albert Wesker (Shawn Roberts) injects her with an anti-virus that takes away her powers just before the plane they are on crashes, leaving Alice the only (?) survivor. Alice finds another plane, flies to Alaska in search of Arcadia, a rumored sanctuary for the uninfected. There she meets up with Claire Redfield (Ali Larter), whom she shared an adventure with in the previous film. Finding no other survivors, the two fly south along the Pacific coast and come across a group of survivors waving them down from the roof of an abandoned prison in downtown Los Angeles. The group includes former athlete and spokesperson Luther West (Boris Kodjoe), former swimmer and would-be actress Crystal Waters (Kacey Barnfield), former film producer Bennett (Kim Coates), his intern/assistant Kim Yong (Norman Yeung), mechanic Angel Ortiz (Sergio Peris-Mencheta), and Wendell (Fulvio Cecere). There is one prisoner still caged inside, Claire’s long-lost brother Chris (Wentworth Miller), who knows a way out of the prison that bypasses the surrounding zombies outside, and leads to shore, where an ocean liner bearing the name Arcadia has been docked just off shore.

As lost as I was in the plot, I still found Afterlife a fun ride, with director Paul W.S. Anderson delivering some nice action set pieces and obviously having some fun with shooting in 3D by occasionally flinging items towards the viewer (it’s a shame the 3D version was not included in this set). It’s about what one would expect from a genre film, nothing more, nothing less.

Resident Evil: Afterlife was digitally captured in native 3D using Sony CineAlta F35 cameras installed on the PACE Fusion 3D system (the same used for Avatar), and completed as a 2K digital intermediate. That has been upscaled to 2160p and color graded using HDR for this 4K UHD release. There is a noticeable improvement in contrast and color depth, as well as fine detail. This is evident from the opening prologue in the colors of the umbrellas, the contrast and texture detail in patient zero’s black and white striped stockings.

Resident Evil: Afterlife has been remixed in Dolby Atmos (with a Dolby TrueHD 7.1 core) for this 4K UHD release, providing for a much wider soundstage and tighter low end than the DTS-HD MA 5.1 track included on the previous Blu-ray release included in this set, even when played back on non-Atmos equipment with speakers in a 5.1 configuration with additional front heights and Pro-Logic IIz enabled. Bullets whiz by you from all directions, rain falls from overhead, yet dialogue is consistently clear and never lost in the mix. This is a very nice upgrade.

All of the special features are included on the original 1080p Blu-ray release from 2010 that has been included in this set. The disc includes links to MovieIQ and BD-Live features, which have since been disabled. I just wish Sony had included the 3D version instead, which had the option of 2D or 3D playback and included all of the same special features.

Undead Vision: Picture-In-Picture: Basically, clips from the featurettes listed below and pre-visualizations are shown in a small window while the movie plays.

Audio Commentary with Writer/Director Paul W.S. Anderson and Producers Jeremy Bolt and Robert Kulzer: The three talk at length about making the movie and the advantages and disadvantages of shooting in 3D.

Deleted and Extended Scenes (1080p; 6:48): Intruders-Extended, Alice and Claire in the Plane, Alice Rolls Quarters-Extended, Getting Dirty, Crystal Volunteers, Claire and Luther at the Prison Gate, On the LA River, and To Arcadia-Extended.

Back Under the Umbrella: Directing Afterlife (1080p; 6:43): Although the piece is supposed to be about director Paul W.S. Anderson, quite a bit of time is spent on the character of Alice, played by his wife, Milla Jovovich.

Band of Survivors: Casting Afterlife (1080p; 6:39): A look at the cast of new and returning characters.

Vision of the Apocalypse: The Design of Afterlife (1080p; 7:28): A look at the previsualizations for the film, as well as the production design.

Pwning the Undead: Gamers of the Afterlife (1080p; 6:11): The cast and crew discuss the similarities between the movies and the games.

Resident Evil: Afterlife is a fun ride, but a confusing mess for the uninitiated. The upgraded video is subtle but noticeable, the real benefit here is the new Dolby Atmos mix. Sony could have easily included the single-disc 3D/2D Blu-ray edition, which contains the same set of special features as the standard 2D Blu-ray edition included here. 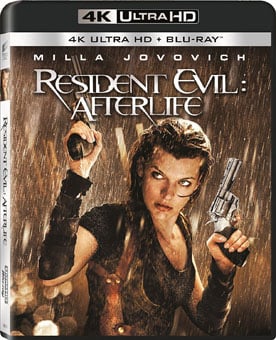