The title of Joseph M. Newman’s Red Skies of Montana might suggest a picturesque western romance, but it’s actually nothing of the sort. Instead, this 1952 drama focuses on men who are “smoke jumpers,” men who parachute into otherwise impassable areas where fires are raging in order to contain them.

The title of Joseph M. Newman’s Red Skies of Montana might suggest a picturesque western romance, but it’s actually nothing of the sort. Instead, this 1952 drama focuses on men who are “smoke jumpers,” men who parachute into otherwise impassable areas where fires are raging in order to contain them. The picture has its moments although due to the nature of the narrative, the really exciting stuff is saved for the film’s last half hour. Until then, there’s a fair amount of conflicting talk before we actually see what these men do on the job.

When lead firefighter Cliff Mason (Richard Widmark) loses his entire crew in an uncontrollable blaze when his men tried to run for safety instead of digging into trenches and riding out the fire over them, Ed Miller (Jeffrey Hunter), the son of one of the casualties Pop Miller (Joe Sawyer), has a hard time coming to terms with Mason being the only survivor, especially since his father’s watch and I.D. bracelet were found a long distance away from where Mason said Pop was last spotted. Mason himself has trouble even remembering most of the mission due to shock and fatigue, so the boss of the smoke jumpers Richard Dryer (Richard Boone) takes Mason out of the field and makes him a trainer for new recruits. But that doesn’t stop the nagging feeling inside Ed that Mason needs to pay for his father’s death.

The screenplay by Harry Kleiner is based on a story by Art Cohn, but because Mason must emerge from the experience with no memory of what happened, we’re prevented from seeing what actually occurred relying instead of his foggy memories of how things went down while the other jumpers grow ever warier of Mason as a boss of a mission they happen to be on. Once we actually get to the climactic fire where Mason once again finds himself in charge and facing a similar blaze to the one that took out his former crew, director Joseph Newman stages a wonderfully impressive action sequence where we see for the first time how the men are fighting forest fires without water or chemicals to control the actual blazes. There’s also another brief earlier mission where Mason must rescue a crew member electrocuted on a blazing telephone pole that also is handled with aplomb. True, the melodramatic face-off between Widmark’s Mason and Hunter’s Miller during the midst of the blaze seems ridiculous with exploding trees all around them and the inferno going ever out of control with each passing second, but obviously the screenwriter wanted to make up late in the game for the somewhat tepid drama of earlier scenes.

Richard Widmark gives another of his bravura lead performances showing tough-minded courage at its fullest after doubting his own abilities during the film’s middle section. Jeffrey Hunter plays his hot-tempered rookie role as written though his character’s timing and lack of reason are fairly absurd given the nature of the profession. Richard Boone gets wasted basically on the sidelines for much of the movie barking orders through a megaphone, and Warren Stevens as the most mistrustful of the younger firefighters scores well in an early role. Constance Smith as Mason’s wife may get second billing, but she’s strictly forgettable in a film that’s almost completely male-dominated. Among the other crew members who do well establishing recognizable personalities with merely a few lines are Gregory Walcott as Randy O’Neill and James Griffith as Boise Peterson. Look fast and you’ll see Richard Crenna, Henry Kulky, and Charles Bronson as other members of the team.

The film is presented in its theatrical 1.37:1 aspect ratio. Because the original Technicolor elements were long since discarded, Fox is left with pale, puny Eastmancolor elements for the film, and they do not do the expansive nature of the outdoor surroundings with the great green woods ablaze justice at all. Sharpness is acceptable, but black levels are disappointingly milky, and there is a fair amount of speckling and debris. Reel change markers are also present on occasion. The movie has been divided into chapters every ten minutes so this transfer has 10 chapters.

The Dolby Digital 2.0 sound mix is decoded by Dolby Prologic into the center channel. Fox engineers have done a good job eliminating age-related problems with the soundtrack, so hiss, crackle, and flutter pose no problems at all. The dialogue has been well recorded though there is some slight distortion when voices are raised in anger while the music by Sol Kaplan and the sound effects (with exploding trees offering some excellent low end for your system) blend nicely together to produce an effective mono track.

Red Skies of Montana takes some time to generate a full blaze, but once it does it certainly holds one’s attention. Too bad the film’s original Technicolor photography couldn’t be reproduced to make for an even more spectacular experience. 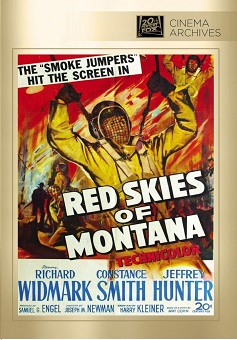