A Russian Police Officer, Ivan Danko (Arnold Schwarzeneggar), is sent to America to track down a Georgian drug lord, Viktor Rostavili (Ed O’Ross). Arriving in Chicago he is paired with street cop Art Ridzik (Jim Belushi). Hijinks and high explosives ensue when the pair buddy up to take down their suspect. 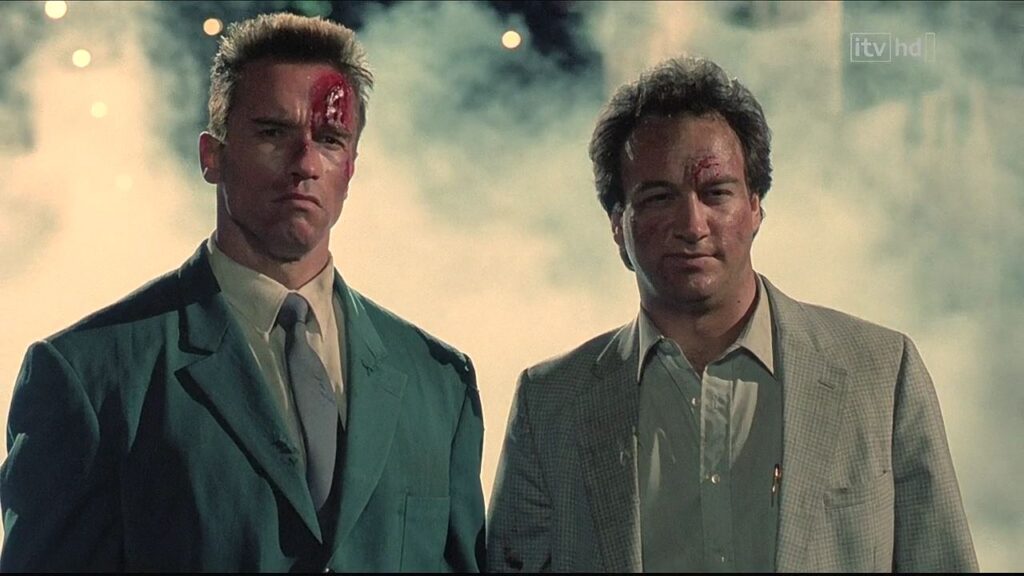 The 80s produced some of the best buddy cop flicks ever and Red Heat fit right in with them, cementing Scwarzeneggar’s capability of mixing up comedy with action. All while introducing Americans to an opening and more approachable side of Moscow, being the first Hollywood film to ever shoot in Red Square. Director Walter Hill is known for another buddy series, 48 hours and the comparisons are apt. Red Heat holds up today from a comedic and buddy film perspective, while the politics have gotten ever murkier. 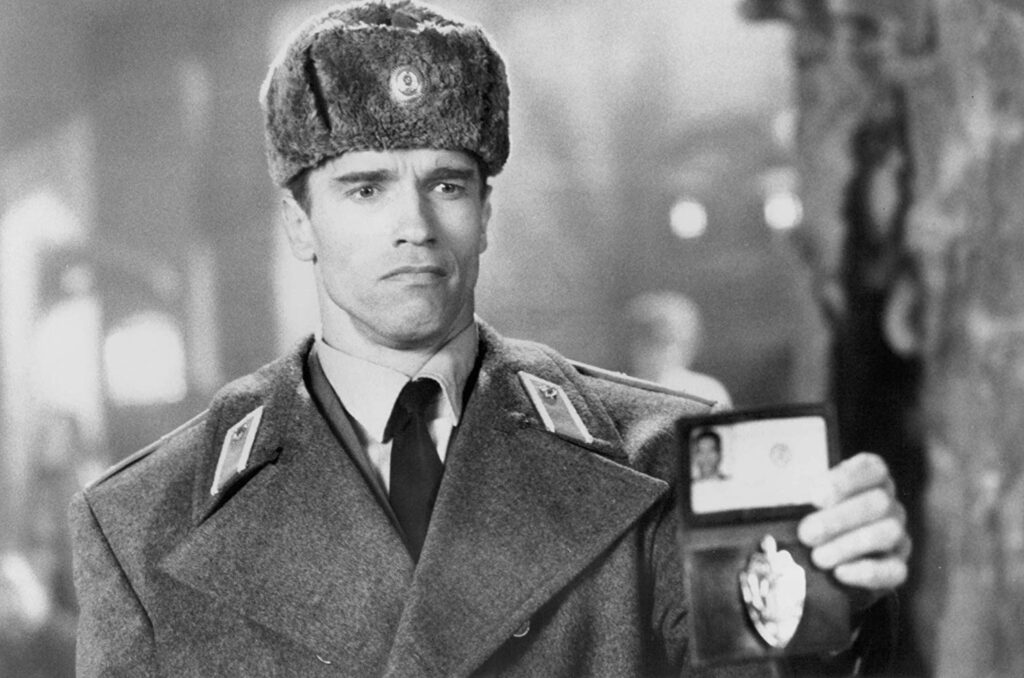 Belushi’s mostly second fiddle to Arnold here, but he gets the best funny lines while the Governator gets the straight lines that turn out funny. Peter Boyle is tragically underused as Lou Donnelly and Gina Gershon’s Manzetti gets to strut a bit but ultimately doesn’t really do much more than bring the parties across each other and get in a jam herself for it. But it’s O’Ross’s wild eyed Rostavili that makes the perfect foil: a soviet taking advantage of America’s freedoms and vices to put the screws on Police.

As buddy movies go it’s got the right ‘Fish out of water’ element along with ‘guys who don’t trust each other at first but come to respect and love each other in the end’ themes down pat.

You can see HTF’s review of the prior BluRay release done by @Michael Reuben here:
https://www.hometheaterforum.com/community/threads/htf-blu-ray-review-red-heat-not-recommended-but-not-a-complete-disaster.289225/ 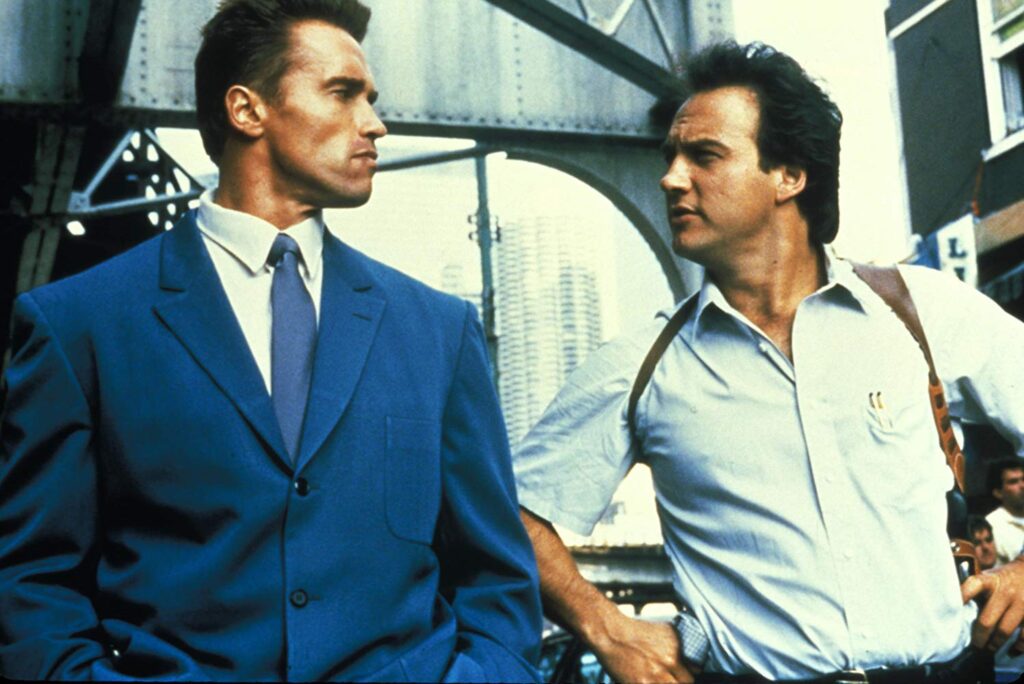 The previous Bluray was notorious for having had a gnarly amount of noise reduction done removing a lot of the detail. Fortunately this 4K UHD with HDR release does not suffer the same. The extra resolution gives plenty of life to the endemic grain while making titles and other elements a bit sharper. Overall it’s not too sharp and captures the vibe of mid 80s productions just right. There is a light HDR pass popping a few highlights, but nothing over the top. Good dark sections with nice shadow detail. Other reviewers including our own Robert A. Harris have noted a bit of ‘red push’ in faces especially and I firmly believe that is from the original capture and not a color correction error local to this disk. Overall skin tones looked natural to me. 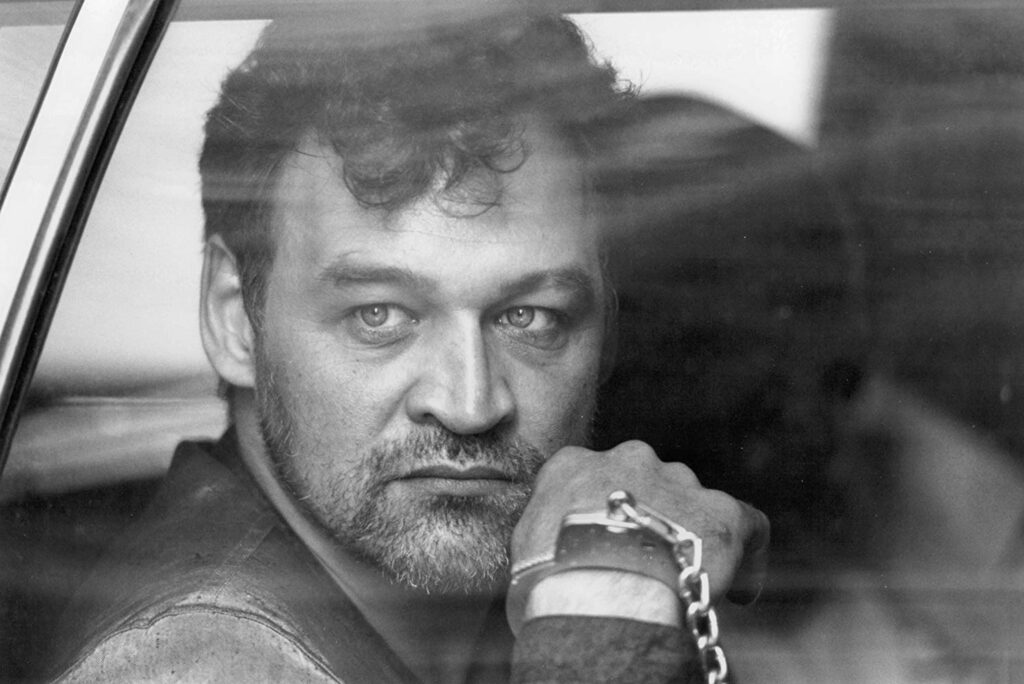 Same 5.1 DTS-HDMA from the previous Blu as far as I can tell. James Horner’s soundtrack is pretty decent tho mostly front focused, with lots of electronic whooshes, crashes and woodwind themes and heroic synth pops. Notable use of a couple of Soviet era influences including Cantata for the 20th Anniversary of the USSR aka October Cantata, movement 2: “The Philosophers”.

The sauna fight and the bus crash scene are both standout action sequences that have decent mid 80s era surround, but aren’t up to matching similar era remixes done in Atmos or DTS:X. 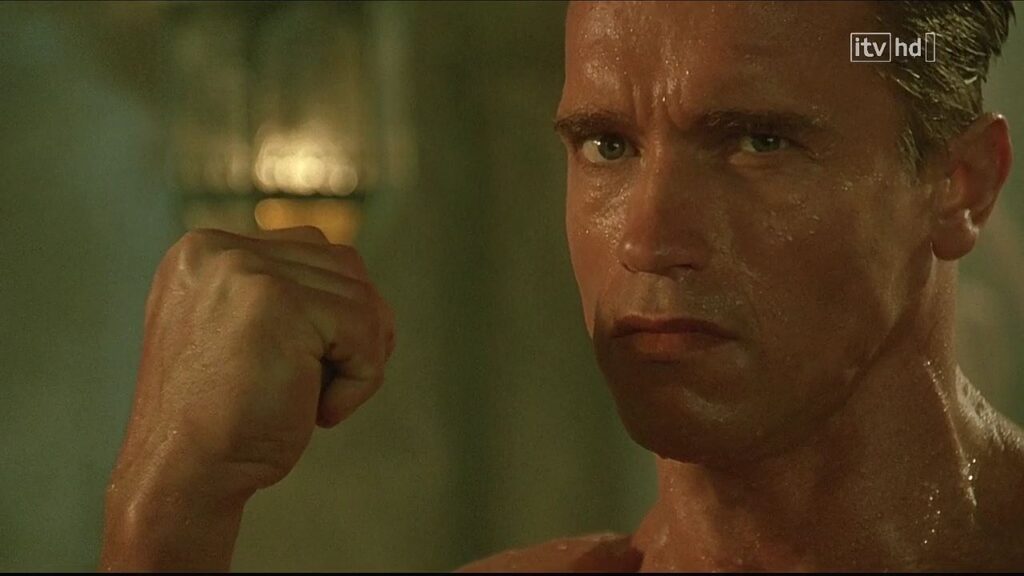 All retreads from the prior releases, both the Bluray and the 2004 DVD:
(Taking Michael Reuben’s recap here)
All of the special features are taken from the 2004 special edition DVD previously released by Lionsgate.

East Meets West: “Red Heat” and the Kings of Carolco (9:40) (SD; 16:9 WS). The history of Carolco, as told by its two partners, Mario Kassar and Andrew Vajna, in separate interviews. Before it crashed and burned in lawsuits and bankruptcy, Carolco was a high-flying production company that took bold risks and reaped big rewards. It was responsible for some of the biggest hits of the 1980s, including the Rambo franchise, Terminator 2, Basic Instinct and, of course, Red Heat.

A Stuntman for All Seasons (12:27) (SD; 16:9 WS). A tribute to stunt coordinator Bennie Dobbins, who died of a sudden heart attack during the last week of filming on Red Heat while choreographing a fight sequence. The film is dedicated to Dobbins, who had worked with Arnold throughout his previous movie career. According to the many stuntmen interviewed for the tribute, he was already a legend in the business at the time of his death.

I’m Not a Russian (But I Play One on TV) (5:14) (SD; 16:9 WS). A brief portrait of Ed O’Ross, for whom the role of Viktor Rosta was a major breakthrough. A trained theater actor, O’Ross played such a convincing Russian in Red Heat that, even today, people who meet him are shocked to discover that he’s an American born in Pittsburgh. It no doubt cemented his reputation that, thirteen years after Red Heat, he accepted the role of Nikolai on Six Feet Under, in which he was equally convincing playing yet another Russian.

Original Making of TV Special (15:58) (SD; 4:3). Roughly the quality of a videotape, this promotional piece has somewhat more personality than a contemporary EPK, primarily because it relies heavily on interview footage with Arnold and Belushi – and it’s easy to forget how entertaining Arnold could be before he went into politics and insisted on being taken seriously.

One item of note: Listen to how the voiceover carefully suggests, without actually saying, that much of the film was shot in the former Soviet Union. In fact, as Andrew Vajna reveals in East Meets West, a skeleton crew and Arnold snuck into Moscow for a day’s unauthorized shooting in Red Square after Soviet authorities refused permission. The other “Russian” scenes were shot in Hungary and Austria.

TV Spots (SD; 4:3). There are four, and each of them has footage shot specifically for promotional purposes, in which either Arnold or Belushi address the camera. They’re good fun. 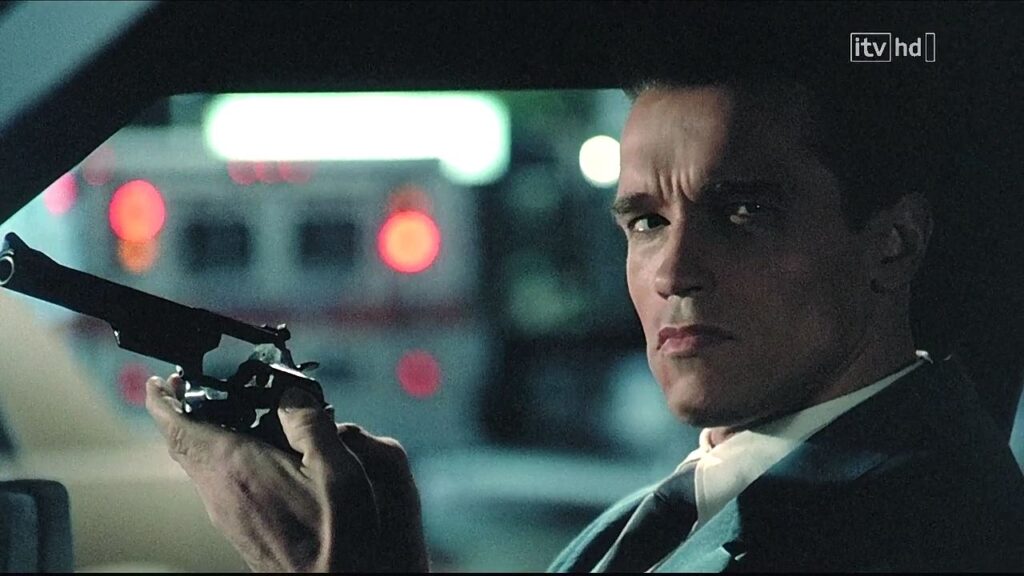 Red Heat is a really strange choice for Lionsgate to put onto UHD 4K disk. It’s also one of the cheapest you can buy at well under $20 on release. The extras are all retreads, and the sound is the same from the Blu.

The video is the star here, it ‘fixes’ the biggest complaint of the Blu release and that may be enough for most fans.

Overall it’s a fun release but it’s no shining star of what can be done with catalog titles. 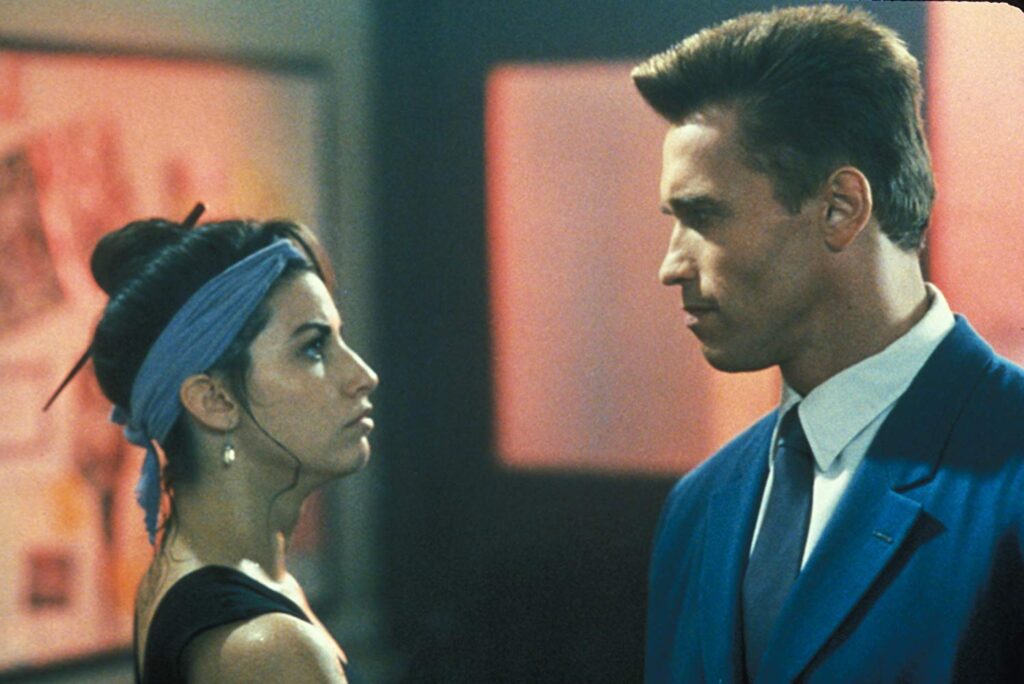 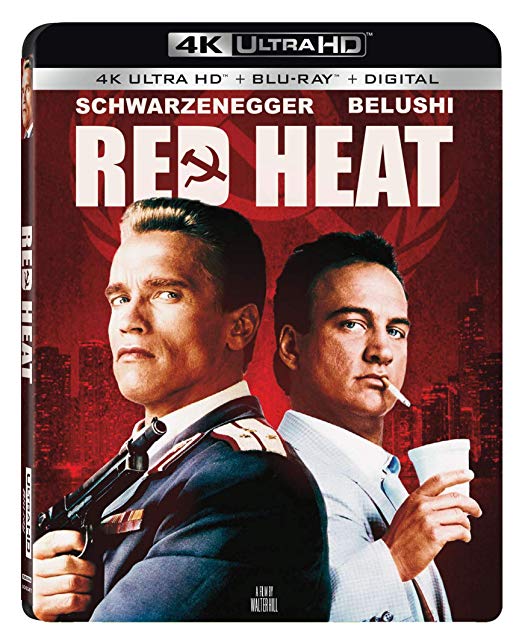