Posted on September 28, 2017 by Todd Erwin
Not quite up to par with the original 4 Stars

More does not always mean better. Case in point: Red 2, which boasts a larger and very talented cast but does not match the laughs or fun of the original.

When RED arrived in theatres in 2010, it was a modest success, one of the few non-Twilight movies from Summit Entertainment to find a large audience. So it was no surprise that three years later, a sequel would be released. In RED 2, Frank (Bruce Willis) is trying to live the suburban life with girlfriend Sarah (Mary-Louise Parker), shopping at Costco. But Sarah is bored, longing for the excitement and danger of her first date with Frank (as detailed in the first film). Marvin (John Malkovich) tries to tell Frank that they are in danger while running into them at Costco, but Frank thinks it’s just another of Marvin’s paranoid delusions. That is, until Marvin’s SUV blows up in the parking lot and Frank is taken into custody, only to be ambushed by a team led by Jack Horton (Neal McDonough) with a resurrected Marvin, who apparently faked his own death, coming to rescue Frank. Apparently, someone in the government has placed Frank and Marvin on a terrorist blacklist for their involvement in a secret Cold War operation known as Nightshade, and in addition to Horton, assassin Han Cho Bai (Byung-hun Lee) is also out to kill Frank. Frank reluctantly takes Sarah along as he and Marvin try to figure out what and where Nightshade is, travelling to Paris where they meet up with Frank’s old flame, Russian General Katja (Catherine Zeta-Jones), who is also after Nightshade. They soon discover that it is a weapon of mass destruction, and the only one who may know its whereabouts is Bailey (Anthony Hopkins), who has been locked away in a mental institution in London. Frank, Marvin, and Sarah team up with Victoria (Helen Mirren) in London to free Bailey, who tells them that Nightshade was hidden away in the deep, dark caverns of the Kremlin in Moscow, allowing the writers to bring back Russian spy Ivan (Brian Cox).

In the three years between the two films, Summit Entertainment was acquired by Lionsgate and director Robert Schwentke left RED 2 to direct R.I.P.D. at Universal. Dean Parisot (Galaxy Quest) was brought in to direct from a script by Jon and Erich Hoeber, who had penned the original. Somewhere and somehow, much of the humor and fun of the original is sadly missing from the sequel. Part of it could be attributed to the character of Marvin (who got most of the laughs in the original), who for some reason has lost much of his paranoid delusions of conspiracies – he’s the more sensible one often offering Frank relationship advice, a joke that falls flat. And then there is Mary-Louise Parker’s Sarah, a fish out of water in the first film, now a wannabe spy who is constantly begging to be included and given a gun, another joke that wears thin quite fast, her character evolving into something much more cartoonish as the movie progresses. The movie seems to also lose its steam when it changes gears from the three fugitives trying to elude capture into the three fugitives trying to save the world. RED 2 isn’t necessarily a bad film, it just doesn’t quite live up to its predecessor, which set the bar awfully high.

RED 2 was shot on 35mm film and completed in 2013 as a 2K digital intermediate. Lionsgate, once again, has done a terrific job of upscaling to 2160p and graded using Dolby Vision HDR. My system decoded as HDR10 with very good results, providing a much higher uptick in fine detail, more natural color tones, and improved contrast with deeper blacks and more-defined shadow details, and nicely resolved film grain.

Lionsgate has remixed RED 2 in Dolby Atmos for this release, which will play back in Dolby TrueHD 7.1 for those without object-based audio equipment. The Atmos track has a much wider dynamic range and deeper LFE presence, and has some fun during action sequences with discrete surround cues in the rear channels. Dialogue remains clear throughout, without getting lost in the mix. A Dolby Digital 2.0 mix optimized for late night listening along with Spanish and French Dolby Digital 5.1 tracks have also been included.

One thing to note with this release: when the 4K UHD disc loads, it for some reason defaults with English subtitles on (the other two Lionsgate releases that were released the same day, The Cabin in the Woods and RED, have the same issue). I have yet to hear back from the studio.

All of the special features have been ported over and included on the 4K UHD disc, as is the norm for most of Lionsgate ‘s releases on the format.

The RED 2 Experience (1080p; 34:41): A set of fluffy PR pieces about the making of the film, viewable individually or as one piece; The Cast, The Weapons, The Spy Gear and Tactics, and The Stunts.

RED 2 lacks the fun and originality of the first film, but it is still an entertaining one. Video and audio are improved over the Blu-ray, and all the extras, plus the trailer, are included. 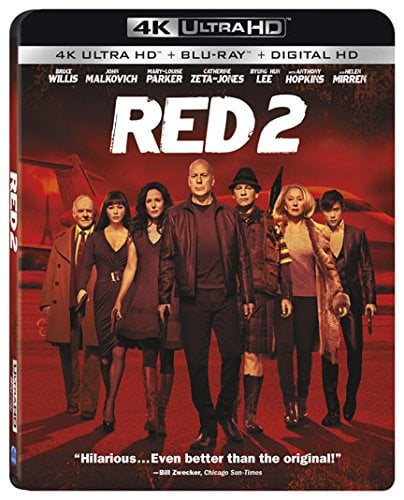