By the 1940’s, director Cecil B. DeMille had long been established as a master showman with films like The Ten Commandments (1923), The Sign of the Cross (1932), and Cleopatra (1934). John Wayne was just emerging as a major Hollywood star following a decade which saw him going from B-movie Westerns into leading man status with the success of John Ford’s Stagecoach (1939). These two distinct Hollywood icons would end up working together for the first and only time with Reap the Wild Wind, a seafaring saga of mid-19th Century America. Previously released on DVD several times by Universal, Kino has licensed the film for its Blu-ray debut.

In the 1840’s, the Florida Keys are a place where salvage companies and people of questionable character set up shop to salvage shipwrecks for their cargo; the most feisty of these salvagers is Loxie Claiborne (Paulette Goddard), a headstrong and independent woman running the family business following her father’s death. A love triangle begins when Loxie rescues Jack Stuart (John Wayne) from a wreck and when Loxie tries to finagle a plum captain’s job for Jack in Charleston, she becomes a target of affection for Steven Tolliver (Ray Milland), the head of the sailing line. It all leads up to a climatic wreck in which both men end up diving into the sea, but only one will come out alive…

Returning to 19th Century America as a setting for a movie – like he did with The Plainsman (1936), The Buccaneer (1938) and Union Pacific (1939) – Cecil B. DeMille hit another entertainment bullseye with Reap the Wild Wind. True to form, DeMille utilizes the many production tools at his disposal to help tell his story; this was his second film shot in Technicolor – following North West Mounted Police (1940) – and the Key West and Charleston of the 1840’s is absolutely stunning in true Hollywood fashion. Technicolor also brings out the vivid work of longtime Paramount production designer Hans Dreier and noted cinematographer Victor Milner in evoking the bygone era; both would receive Oscar nominations for their work here. The real draw here is the great special effects, which are brilliantly on display during the climatic sequence involving a battle with a giant squid in a shipwreck; that moment alone may have netted the film its lone Oscar win for the special effects. For the most part, Reap the Wild Wind may have a traditional love triangle at the heart of its story, but its done in grand style with lavish production values and special effects often dwarfing the plot; in other words, it’s everything you would expect from a Cecil B. DeMille movie of the era.

In his only film working for DeMille, John Wayne plays a character with a dark side to him, anticipating greater success further down the line with John Ford’s The Searchers (1956); The Duke apparently still harbored some bitterness towards DeMille for being passed over for the role of Wild Bill Hickock in The Plainsman, which likely explained why Wayne and DeMille never worked with each other again. In the lead, Paulette Goddard is an appropriately fiery and feisty Southern belle with an independent streak about her; one could look at her performance here as something of a consolation for being passed over for the part of Scarlett O’Hara in Gone with the Wind (Paulette was one of the actresses considered before Vivien Leigh was cast). Ray Milland makes for an appropriate romantic rival who can also hold his own in a fight in crucial scenes; interestingly enough, Errol Flynn was originally sought out for the part, but Jack L. Warner wouldn’t loan Flynn out to DeMille. Other notable appearances and familiar faces here include Susan Hayward as Loxie’s cousin, Raymond Massey as the villainous shipwrecker and scavenger King Cutler, Robert Preston as his brother and the love interest of Loxie’s cousin, Lynne Overman as a captain and ally of Loxie, Charles Bickford as a captain taking in shanghaied sailors by force, Louise Beavers as the Claiborne family maid, wrestler William “Wee Willie” Davis as a muscle of Cutler’s known as “The Lamb” (his voice was dubbed by an uncredited Akim Tamiroff), and famous gossip columnist Hedda Hopper – in her last straight dramatic role – as Loxie’s aunt in Charleston, just to name a few.

The HD transfer for this release presents the film in its original 1:37:1 aspect ratio. Film grain is strong and organic and the Technicolor hues are given a faithful rendering with minimal instance of registry errors present; fine details are also faithfully rendered with very few instances of problems such as dirt, scratches or tears. Overall, this is a nice improvement over previous home video releases and likely the best it will ever look on home video.

The original mono soundtrack is presented on a DTS-HD Master Audio track for this release. Dialogue is strong and clear along with the sound effects; Victor Young’s score also has strong ambiance and fidelity without being invasive. There’s nary an instance of problems due to age (crackling, hissing, distortion, etc.), which means that this is likely the best the movie will ever sound on home video and an improvement over previous editions.

Bonus KLSC Trailers – The Spoilers, Pittsburgh, Legend of the Lost, Brannigan, Panic in the Year Zero, The Premature Burial & X: The Man with the X-Ray Eyes.

A hit both critically and at the box office, Reap the Wild Wind stands out as pure escapist entertainment and as one of Cecil B. DeMille’s best movies not named The Ten Commandments. Kino has done a solid job in giving the movie a good presentation in terms of audio and visual quality for its Blu-ray release. Recommended for fans of John Wayne and Cecil B. DeMille movies and worth an upgrade from the DVD. 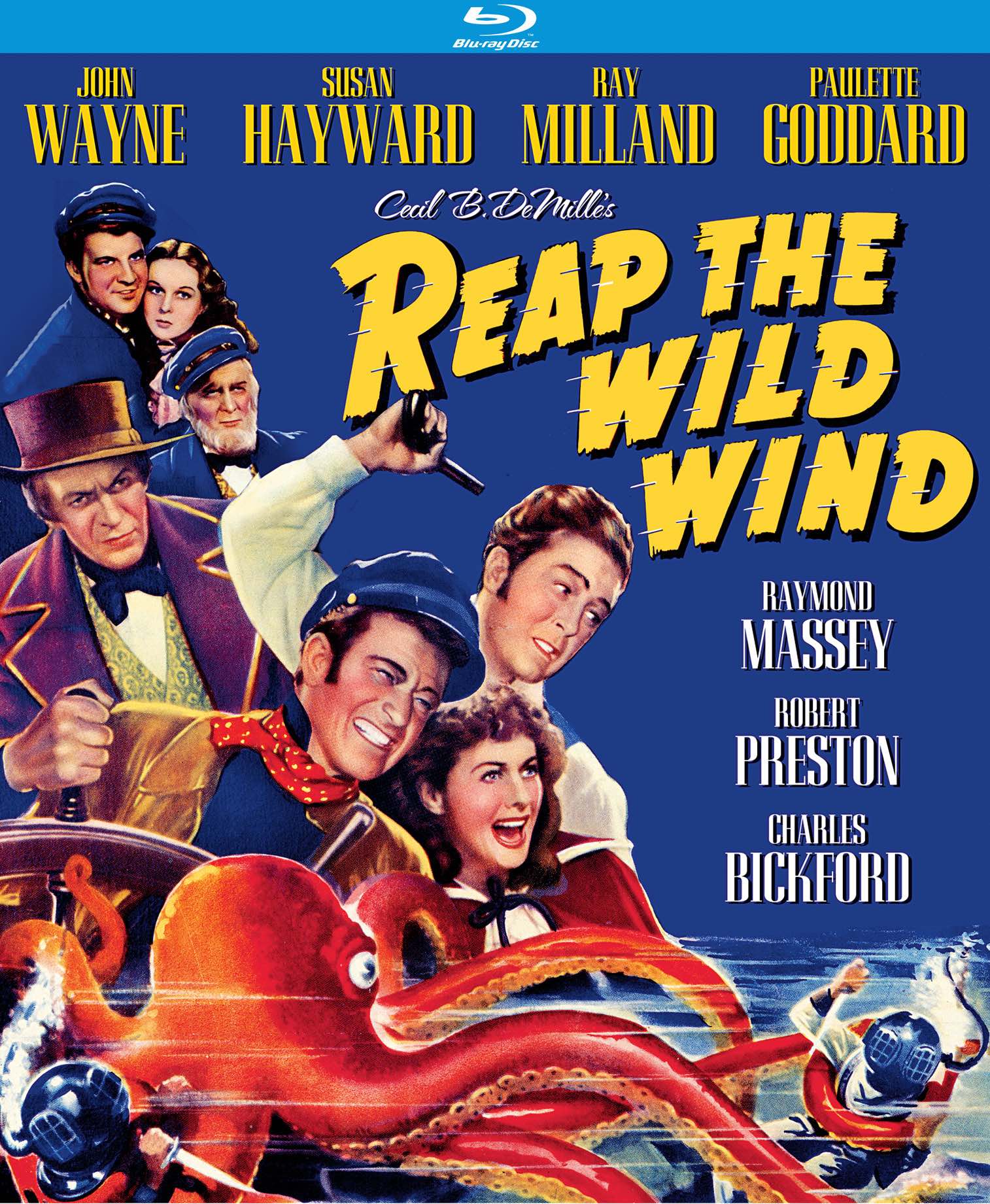