Rapid Fire is Brandon Lee’s first starring role in an American film, and though the story is thin, Lee has the charisma and martial arts prowess to make it work. The film is more notable for the potential that Lee shows in it rather than anything actually offered onscreen, but is an entertaining enough showcase for his unique talents.

Rapid Fire is not a particularly good film, but it can be argued that making a particularly good film was probably not the goal that the filmmakers set out to accomplish. Rather, the film serves as a vehicle for star Brandon Lee’s talents: for his outstanding mastery of the martial arts, and just as importantly, for the easy charisma that he brought to the screen. Everything else, from the writing to the direction to the other performances, are just good enough to create a showcase for Lee. It’s the kind of film that might have otherwise faded into obscurity, were it not for Lee’s tragic death. The movie has been a cult classic ever since, one of the very few opportunities for film fans to view Lee’s talent and to imagine what might have been.

Lee stars as Jake Lo, an art student at a local Los Angeles college with a tragic past. Just a few years earlier, Jake witnessed the death of his father during the Tiananmen Square riots, and has been turned off from politics ever since. When he’s unwittingly lured to a gathering of Chinese pro-democracy advocates (he thinks he’s being invited out on a date), he witnesses the murder of one of the hosts by a powerful Mafia figure, Antonio Serrano (Nick Mancuso). It turns out that Serrano has made his business distributing Chinese-made heroin, and that Jake is the first witness that the FBI has found to testify against the mobster. But after Jake finds himself in danger after the FBI is infiltrated by Serrano’s men, he’s rescued by an unconventional detective named Lt. Mace Ryan (Powers Boothe) and Ryan’s partner Karla (Kate Hodge). Ryan explains that Serrano is just one link in a chain that goes all the way to Chinese drug kingpin Tau (Tzi Ma), and that he’s been trying to capture Tau for a decade. With Jake now firmly recruited to Ryan’s cause, they set out to bring down Tau and end his drug trade once and for all.

Brandon Lee is easily the best thing about the film. He’s electric on the screen, and the movie comes to life whenever he appears. He elevates every scene he’s in, but the film suffers whenever he’s off-screen. Of the remaining performers, Powers Boothe carries himself best, giving the closest thing the film has to a fully realized performance. The rest of the supporting cast, including Mancuso, Hodge, Ma and others, at times struggle to bring credibility to underwritten roles. They are good (or bad) because the script says they must be, and not because they’ve created a convincing inner life for their characters. On one hand, this makes it even more fun when Lee is able to dispatch of a bad guy with a well-timed kick, but it is a little disappointing that he doesn’t have more credible adversaries.

The script here is paper thin, and the direction is similarly pedestrian. Lee had a hand in the design of some of his action sequences, and those are clearly the film’s high points. With that said, a better script could have given more motivation to those action sequences, and better direction would have allowed for Lee’s incredible stunt work to appear more fluid on camera. (There are some action sequences which are cut so quick that Lee’s moves sometimes get lost.) Additionally, the subplot concerning the death of Jake’s father feels exploitive given the tragic passing of Brandon Lee’s father, Bruce Lee. But at the same time, Brandon does some of his best acting when his character reminisces about his father.

Still, with a brief running time of only 95 minutes, and with Brandon Lee showing off remarkable physicality and easy charisma, the film never overstays its welcome and is a fun, if otherwise forgettable, picture. And as one of only a handful of films that Lee made in his short career, it remains a valuable demonstration of his potential.

Rapid Fire is presented in its original theatrical aspect ratio of 1.85:1. While the film generally looks fine, it is perhaps not as sharp or detailed as the new 4K transfers from Twentieth Century Fox that Twilight Time has been releasing lately. The film has an extensive amount of opticals from its use of subtitles, and there is a noticeable loss in quality whenever the film cuts to one. The opticals here are frequently grainy and feature a fair amount of dust and debris. The non-optical footage fares better, but still has a slightly rough appearance. Colors appear accurate and pleasing. This transfer probably looks as good as possible given the elements used, but I wish Fox had gone back to the original negative and recreated the subtitles digitally (or allowed Twilight Time to use player-generated subtitles). The transfer is certainly good enough to appreciate Lee’s talents, but I wish Fox had gone the extra mile here.

The film’s 2.0 audio is presented via the lossless DTS-HD MA codec. The audio has some decent separation, and panning effects are well utilized during the action sequences. Dialogue is generally well recorded and easy to understand within the mix. The track feels accurate to the time period, and while it is not as dynamic or spread out as a more modern mix might be, works well with the visuals.

Audio Commentary with Composer Christopher Young and Film Historian Nick Redman – Redman guides Young through the film, asking good questions along the way. Young gives a great overview on how film music comes into being. This is a great listen for anyone who is a fan of film scores; if you love film music, it’s a must-listen. There’s not a lot of information specifically about Rapid Fire but it’s such an entertaining track that it doesn’t really matter.

Featurette (4:59, SD) – An EPK-style promotional piece with Brandon Lee and other cast members discussing the film.

Introducing Brandon Lee (2:43, SD) – Another EPK-style promotional piece, with Lee talking about the film and the fight choreography.

Original Theatrical Trailer (1:27, SD) – The “scope” format trailer crops the image to 2.35:1, and is an enjoyable reminder of action movie trailers from the early 1990s.

Booklet – Julie Kirgo’s insightful essay is included along with stills from the production and the original poster art.

Rapid Fire is by no means a great film, but features a charismatic leading performance from Brandon Lee and some enjoyable stunt work. Unfortunately, the transfer provided by Twentieth Century Fox is not quite up to the standard of their latest work, but is good enough to allow the film’s best attributes to shine through. The real star of this release is the excellent new commentary with composer Christopher Young and Twilight Time founder Nick Redman discussing how film scores come into being. It’s a film school-worthy track that is among the best that Twilight Time have recorded. Fans of Brandon Lee will enjoy this release, but fans of film music who otherwise wouldn’t pursue a martial arts film should consider this release on the strength of the commentary track alone. 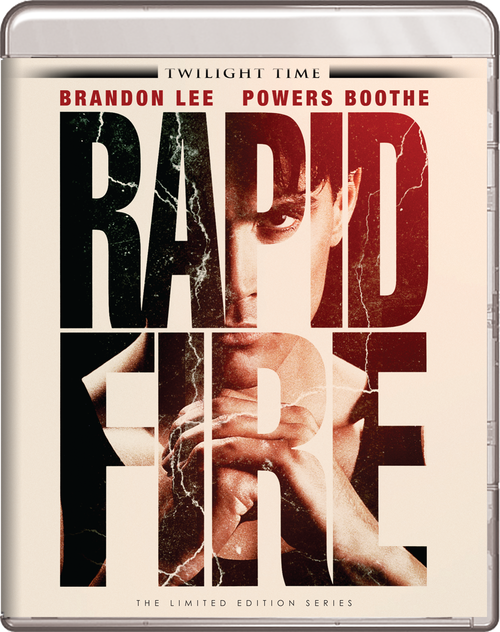