Dwayne Johnson and director Brad Peyton re-team for a third time on Rampage, a monster movie that is actually based on a popular video arcade game that debuted in 1986.

Things have gone horribly wrong on Energyne’s space station, as a genetic experiment wreaks havoc, causing the station to fall out of orbit and crash to Earth, along with three samples of the pathogen, one landing in Wyoming, one in the Florida Everglades, and the third at the gorilla enclosure at the San Diego Wildlife Santuary (which is actually the San Diego Zoo). The pathogens infect a wolf, an alligator, and an albino gorilla named George (performance captured Jason Liles) who is under the care of former Special Forces Op Davis Okoye (Dwayne Johnson). The pathogen genetically mutates its host organism into a giant monster with additional exaggerated features, for example the alligator has tank-like skin and the wolf has porcupine quills. Meanwhile, Claire Wyden (Malion Ackerman), the CEO of Energyne, sends out a beacon from the top of her corporate tower offices in Chicago calling the three monsters in hopes of them destroying one another and stealing a tissue sample to recover her lost technology and save her company. Hot on George’s tail are Davis, former disgraced Energyne geneticist Dr. Kate Caldwell (Naomie Harris), and government agent Harvey Russell (Jeffrey Dean Morgan), all hoping to cure George and stop the rampage that is about to occur in the Windy City.

It’s hard to believe that Rampage is based on a 1986 video game of the same name, but then the game itself didn’t have much of a story – the player was the monster and the goal was to destroy buildings, which pretty much covers the third act of Brad Peyton’s movie. Getting to that third act is sometimes plodding and feels padded, but the fact that the movie never takes itself seriously and if it weren’t for both the charm of star Dwayne Johnson and his toe-to-toe macho one-upmanship with Jeffrey Dean Morgan, plus the humorous relationship between Johnson and George, this would be just another bad movie adaptation of a video game. Rampage is big, loud, dumb, but also a lot of fun.

Rampage was captured in 3.4K and 6.5K resolution on Arri Alexa 65, Alexa Mini, and Alexa SXT cameras, then completed as a 2K digital intermediate with Dolby Vision high dynamic grading. Warner’s 2160p upscale has also been graded with both Dolby Vision and HDR10 high dynamic range (my display is only capable of HDR10), and is a small step above the included 1080p Blu-ray. For starters, fine detail is more apparent, such as the individual hairs on George’s body, the armored scales on the alligator, and many of the hidden easter eggs in the background during the Chicago carnage are more visible. Colors are much more vivid with natural gradients, particularly in the various tones on George’s body as he loses more and more fur as he mutates and takes on damage. Contrast is exceptional, with deep inky blacks, particularly in the nighttime sequences, allowing for strong shadow detail with no crushing.

Both the UHD and Blu-ray come equipped with a rocking Dolby Atmos track and a very good DTS-HD Master Audio 5.1 track. Rampage, though, is yet another Warner release where the UHD disc defaults to DTS-HD while the Blu-ray defaults to Dolby Atmos. That being said, the Atmos track is reference-level, as expected on a film like this, with a very wide dynamic range. Yes, it can be quite loud and rumble the floorboards when the city of Chicago is under siege by the three monsters, but it is also quiet and subtle, like during the early sign language sequence between Davis and George at the gorilla sanctuary. The heights and object-based cues help to provide an immersive aural experience, with help from a very active LFE channel. Dialogue, though, remains clear and understandable throughout despite all the audio carnage being thrown at the listener.

As usual for a Warner release, the UHD disc contains no special features whatsoever, but those can be found on the included Blu-ray edition of the movie, which, unfortunately, are pretty standard EPK fluff.

Not Just a Game Anymore (1080p; 6:15): Cast and crew reflect on their love of the original video game that “inspired” the movie.

Trio of Destruction (1080p; 10:08): A look at the creation of the three monsters by WETA featured in the film.

Bringing George to Life (1080p; 11:53): Possibly the most interesting feature on the disc, as it looks at the training that performance capture actor Jason Liles underwent to play George.

Digital Copy: An insert contains a code to redeem a digital copy on Movies Anywhere. I redeemed my code on Vudu, which provided me with the movie in UHD on Vudu, FandangoNow, and Google Play Movies, and HD on Amazon Prime Video.

I found Rampage to be dumb, goofy fun and an entertaining way to spend two hours.

“Digital Copy: An insert contains a code to redeem a digital copy on Movies Anywhere. I redeemed my code on Vudu, which provided me with the movie in UHD on Vudu, FandangoNow, and Google Play Movies, and HD on Amazon Prime Video.”

Also redeems 4K on iTunes.
Expand signature
It's gonna be a hell of a ride. I'm ready. . 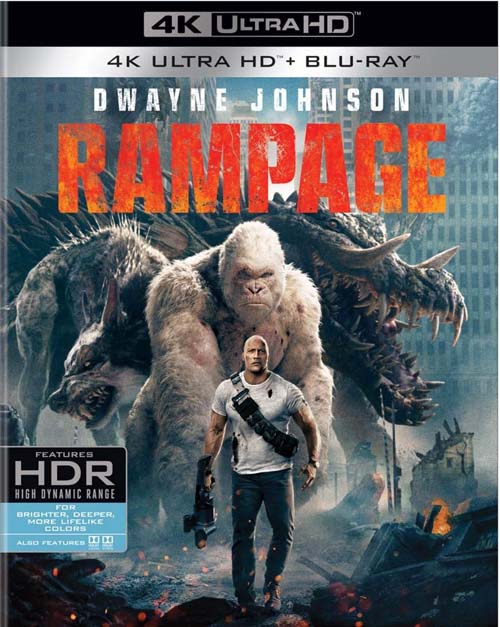