John Ford’s Irish-tinged tale of a charming people and their romantic and conflicting entanglements gets vivid Technicolor treatment in The Quiet Man, one of the director’s true classics and most fondly remembered films.

John Ford’s Irish-tinged tale of a charming people and their romantic and conflicting entanglements gets vivid Technicolor treatment in The Quiet Man, one of the director’s true classics and most fondly remembered films. With robust performances from a handful of Ford’s stock company of stars and featured players, The Quiet Man continues to weave its impish spell, now more vibrant than ever before in Olive’s latest addition to its Signature Collection of great movies.

Boxer Sean Thornton (John Wayne) returns to Inisfree in Ireland, his birthplace, determined to buy his family’s former cottage and property and live a more bucolic life away from the hustle and chaos of his tragically-colored ring career. In buying the property from The Widow Sarah Tillane (Mildred Natwick), he makes an instant enemy of village bully Will Danaher who’s the area’s squire and had long coveted the property, unfortunately, too, since Sean also becomes instantly smitten with Danaher’s beautiful if temperamental sister Mary Kate (Maureen O’Hara). Will isn’t eager to allow his sister to be courted by the Yank, but with his own eye on the Widow Tillane, he knows she’d never enter his home with a woman already in residence, so he allows the courtship, chaperoned by the town’s bookie Michaleen Oge Flynn (Barry Fitzgerald). But even after his sister’s marriage, Will continues to make life impossible for Sean who having killed a man in his last bout, refuses to fight for his or his new wife’s honor, driving her away and losing the respect of the town who had come to really like and support him.

Maurice Walsh’s 1933 short story formed the basis of Frank S. Nugent’s screenplay though it’s been greatly romanticized and fortified with lots of local color which director John Ford takes great pains to show us at every moment: the town’s pub complete with local characters and their drinking songs, the county horse race for the winner to claim the bonnet of his chosen sweetheart, the extended courtship rituals, church services, and lots of views of the spectacular Irish countryside (the movie’s exteriors were filmed on real Irish locations, but there are also plenty of very obvious studio process shots featuring the stars that sometimes clash with the unbridled beauty of the Emerald Isle). The romantic saga of Mary Kate and Sean plays in counterpoint with other character-rich subplots with many of the village inhabitants: Michaleen’s endless thirst amid his schemes and machinations, the Catholic priest (Ward Bond) who’s had a ten-year running battle with an ornery trout, the Protestant vicar (Arthur Shields) afraid he’s going to be reassigned due to his tiny congregation. Ford, of course, plays everything toward to climactic confrontation between Sean and Will, a donnybrook that has the whole town joining in, and it’s both funny and exciting. But it’s the romance that most viewers will become invested in, difficult to do, however, since Maureen O’Hara’s Mary Kate blows hot and cold throughout the movie, her fiery temper flying off the handle at the slightest provocation instead of working with her companion in solving their problems together. But Ford films a couple of memorable scenes of Wayne’s Sean taming his wild filly, and their chemistry together is as always electric and magnetic.

It’s a great role for John Wayne having to play someone who’s not all brawn and bravado but is more sensitive and patient in his desires, a wide-ranging part that Wayne had precious few of during his lengthy career. Maureen O’Hara shows why she was named “Queen of Technicolor” (though several other actresses also laid claim to that title during Technicolor’s heyday), and she gives a fine performance in a part that might have needed some further development. Barry Fitzgerald, as usual, manages to steal all of his scenes as the impish scalawag though it was the blustery, bigger-than-life Victor McLaglen who walked away with the supporting actor Oscar nomination. Ford’s stock company of character actors including Ward Bond, Arthur Shields, and his own brother Francis Ford (as town elder Dan Tobin) all make memorable additions to Inisfree. Mildred Natwick, always welcome in any movie, has some choice bits throughout the film.

The film’s original 1.37:1 theatrical aspect ratio is faithfully rendered in this 1080p transfer using the AVC codec. Compared to Olive’s previous Blu-ray release, this transfer seems to have been color timed a shade darker than before and with perhaps a bit more saturation to the colors than the previous release (this new release supposedly taken from a 4K scan off the camera negative). The reds really pop off the screen, and greens are solid without ever glowing fluorescent. Skin tones can look burnished in the transfer especially in darkened interiors though there is plenty of detail in hair, facial features, and clothes (tweeds and hounds tooth jackets never flash) in the sharp clarity of the transfer. Black levels are generally very good. With the transfer clean and free of age-related artifacts, this is certainly the best the film has looked on home video and certainly closer to the Technicolor look that has been missing from previous releases. The movie has been divided into 12 chapters.

The DTS-HD Master Audio 2.0 mono sound mix offers an era-typical combination of nicely recorded dialogue, the beautiful Victor Young background score and Irish drinking tunes, and atmospheric effects, all blended with seasoned professionalism into the single track. There is occasional low level hiss to be heard, but nothing that distracts from the film’s genuine spell.

Audio Commentary: John Ford biographer Joseph McBride offers a fine if occasionally scattershot commentary track jumping around from Ford’s life to mentions of other films to interesting background on the making of this movie.

A Tribute to Maureen O’Hara (9:29, HD): actresses Juliet Mills, Ally Sheedy, and Hayley Mills recount stories of working with the legendary actress at different stages of their careers.

The Old Man: Remembering John Ford (12:18, HD): writer-director Peter Bogdanovich recalls his first meeting with John Ford on the set of Cheyenne Autumn and subsequent encounters with the crusty director including the documentary film on Ford he produced and directed for the AFI.

The Making of The Quiet Man (27:49, SD): Leonard Maltin produced and wrote this featurette on the history of the movie’s production with clips from the film and stills from the director’s other work.

Six-Page Booklet: contains a brief cast and crew list, information on the film’s transfer, the chapter listing, and some black and white and color stills and poster art for the movie.

John Ford won his fourth Academy Award for directing his classic The Quiet Man (a record that has still not been bettered), and the film in this new Olive edition plays better than ever with vivid Technicolor hues and some novel bonus material in this new Signature Collection Edition. Highly recommended! 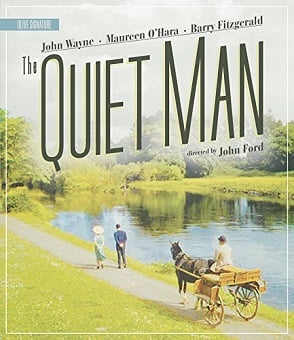