A gnawingly bitter love triangle and some enigmatic political posturing unfolding against the backdrop of escalating turmoil in 1950s Southeast Asia give Joseph L. Mankiewicz’s The Quiet American a most unique personality.

A gnawingly bitter love triangle and some enigmatic political posturing unfolding against the backdrop of escalating turmoil in 1950s Southeast Asia give Joseph L. Mankiewicz’s The Quiet American a most unique personality. With several action scenes not in the usual wheelhouse of this most literate of directors and a striking use of location photography in Vietnam, The Quiet American is anything but quiet, an eye-opening early glimpse at the disaster that would unfold there during the next twenty years.

It’s 1952, and Thomas Fowler (Michael Redgrave) is an apolitical married British journalist stationed in Vietnam to cover the growing unrest there. While in the country, he begins an extramarital affair with the beautiful young Vietnamese woman Phuong (Giorgia Moll) though he knows his wife back in England will never grant him a divorce. However, their romance is interrupted by Alden Pyle (Audie Murphy), an idealistic American economist who arrives in Vietnam on an aid mission as part of the Friends for Free Asia. When Pyle falls for Phuong himself and is eager to offer her the marriage and home that Fowler can never give her, Fowler’s growing paranoia about her leaving him drives him to distraction. When he hears from a Vietnamese Mr. Heng (Richard Loo) that Pyle may be an undercover spy bringing explosives into the country for the Communists, he’s eager to do anything necessary to stop his covert activities.

Writer-director Joseph L. Mankiewicz has adapted Graham Greene’s pessimistic best seller into an almost equally cynical screenplay though he leavens the political didacticism as much as he can while still retaining the flavor of the book. The focus certainly falls here on the Thomas Fowler character who is the real central core of the movie with the title character reduced almost to an afterthought during much of the film (widely discussed; seldom seen and with unclear motives unlike in the book). Mankiewicz presents some really exciting incidents during the film’s somewhat overlong two-plus hours: a breakdown on a Vietnamese road at night (after setting up the dangers of the Communist Vietcong after dark) which leads to a bombardment and further assault, escalating surprise daytime bombings on the streets with hundreds of innocent bystanders as victims, and secret meetings in bombed-out buildings suggesting covert espionage with a neophyte at the center: all are wonderfully staged and shot sequences which draw us into the web of mysterious activities and unknown perpetrators. If the penultimate sequence in the film ties all of the previous events (much of the movie is told in flashback) into a perhaps too neat little bundle, it’s a satisfying way to get all of our questions answered and offer us an opportunity to understand the nature of the con job that’s been pulled on us.

Michael Redgrave gives one of his most expressive performances as Thomas Fowler even though he’s playing a character whom we grow to dislike more and more as the film runs, an entitled, selfish Englishman whose smugness and pomposity lead not only to his own unhappiness but to the downfall of other characters we’ve come to understand during the course of the movie. Audie Murphy doesn’t really have many opportunities in the movie to develop a rounded character; he’s meant to be enigmatic, but he also seems a bit too naïve and complacent sometimes amid the turmoil surrounding him. Giorgia Moll is lovely as the woman in question, her halting way with English rather endearing and completely natural in context. Kerima as her demanding sister establishes authority and expectations with only a couple of scenes in which to perform. Claude Dauphin as the chief of police Inspector Vigot is around to sort out the story at the end while Fred Sadoff as Fowler’s assistant and Richard Loo as a local with information to impart to Fowler both etch distinct characters with only limited screen time.

Though the liner notes claim a 1.66:1 aspect ratio, the transfer actually boasts a 1.85:1 image in 1080p resolution using the AVC codec. At its best, the monochrome image is sharp and detailed and features beautiful black levels, crisp whites, and wonderfully applied contrast. There are some soft shots, many filmed by the second unit on location but occasionally some first unit shots that seem a bit unfocused. There are some dust specks to be seen here and there but no distracting scratches or globs of debris to pull focus from the movie. The film has been divided into 24 chapters.

Six-Page Booklet: contains some black and white stills, original poster art on the back cover, and film historian Julie Kirgo’s salient analysis of the movie.

The Quiet American wasn’t a box-office success in its initial release, but our knowledge and understanding of the Vietnam struggle gained over the last forty years gives this early story of the conflict there an enlightened viewpoint that wouldn’t have been possible to viewers in 1958. There are only 3,000 copies of this Blu-ray available. Those interested in purchasing it should go to either www.twilighttimemovies.com or www.screenarchives.com to see if product is still in stock. Information about the movie can also be found via Facebook at www.facebook.com/twilighttimemovies.

Watching my TT blu-ray of this now. I wish the novel had been more faithfully adapted. And I think the following two are miscast—Audie Murphy (a real-life war hero who wasn't an especially good actor) and Giorgia Moll (an Italian woman with make-up playing a Vietnamese woman). Picture quality is so-so in places in this movie owned by the remnants of MGM. Pq is not up to the level of the better TT titles from Fox.

Still, given the year the movie was released, 1958, it's an interesting foreshadowing of events.
Last edited: Jul 21, 2020
Reactions: Flashgear
You must log in or register to reply here. 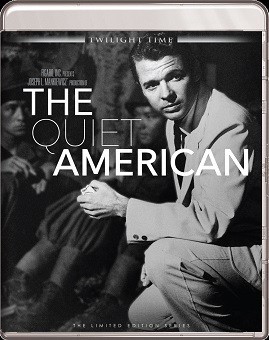