Despite its familiar basic narrative, Queen of Katwe draws one in to its story of a chess whiz rising from the depths of poverty with the help of a loving mentor and her family’s support.

A biographical tale that’s alternately fresh and yet also very familiar, Mira Nair’s Queen of Katwe could be any sports movie about an underdog rising to the top of the heap. Here, however, the movie is aided immensely by its singular locations, unusual characters plugged into its very stereotypical story of triumph over tragedy, and fine performances by a cast of mostly unknowns. You may know how the story ends, but it’s nonetheless an interesting journey to get there.

Living in the poverty of the Ugandan slums, Phiona Mutesi (Madina Nalwanga) and her brother Brian (Martin Kabanza) come under the tutelage of trained engineer Robert Katende (David Oyelowo) working as a youth minister until he can land an engineering job. Though he instructs the more athletic children in football, those more intellectually inclined prefer chess, and he organizes a chess club in his church and deems them “The Pioneers.” The children all blossom under his expert care, and Phiona especially proves herself to be a chess prodigy who can think eight moves ahead and defeat players with many more years of experience than she has. After she wins the Father Grimes School Championship at Kings College, Robert realizes what a marvel he has to work with, but her struggling mother Harriet (Lupita Nyong’o) does not understand how playing a board game can lift their desperate family out of the slums and must be constantly persuaded to let Phiona continue. Once Phiona gets a taste of the world outside of her Katwe slum, she longs for a better life that more recognition of her talent might bring her and her family.

William Wheeler has based his screenplay on the book by Tim Crothers, and for much of the story’s narrative, you could plug a boxing tale like Somebody Up There Likes Me or a baseball story like Pride of the Yankees into many of the same plot points that Wheeler hits in his script, and you’d be hitting the same beats. Phiona shows early promise, scores several surprising wins over much more lauded competitors, becomes overconfident and finds defeat unconscionable, and then must pull herself up and try again, all coming down to the climactic match against a skilled and unscrupulous opponent. Where director Mira Nair manages to supersede the story’s predictable construction is in using the unique surroundings (filmed in Uganda, in some cases in the actual places like the wooden church hut where the chess club was habituated), casting locals in many of the roles including some of the larger parts despite their lack of acting experience, and working native songs, rhythms, and color into her production making it have the real ring of authenticity. While she works hard at establishing that true-to-life look and feel, it’s very hard to make an intellectual contest like chess into something riveting, but Nair does what she can with the matches, focusing on facial features in the combatants as well as with the spectators as the momentum in a match ebbs and flows from one player to another. A knowledge of chess might help even more with enjoying intricacies of the matches, but the camerawork and editing is so quick that it’s unlikely many of the matches could be followed to their conclusions.

While Phiona’s family is of necessity the focal point of the movie, we do get to some intimate moments in the life of mentor Robert Katende, too, and here is where the solid acting skill of David Oyelowo comes in very handy playing a man of true goodness and light, a spiritual adviser to these children and their families who goes above and beyond the call of duty to do right by them. Oscar-winner Lupita Nyong’o offers a touching performance as the very proud Nakku Harriet, determined to provide for her family without offering herself to a sugar daddy or searching for another husband after the death of her first. Madina Nalwanga does a striking job as Phiona, more impressive when one realizes this is her first time acting, and she’s carrying a large quantity of the film on her slim, youthful shoulders. Phiona’s older sister Night who takes up with a sugar daddy whose attentions are fleeting and inconsistent gets a fine enactment by Taryn Kyaze while brother Brian, himself very talented at chess, is played as all boy by Martin Kabanza (though the film covers a five year period, he seems to age the least of the family members). Esther Tebandeke is excellent as Robert’s wife Sara who teaches the children to read since their parents can’t afford to send them to school, and Nikita Waligwa as another talented chess player Gloria is delightful, especially in a scene at a tournament where she can’t believe she got beaten.

The film’s theatrical 2.39:1 aspect ratio is faithfully delivered in 1080p resolution using the AVC codec. It’s a reference quality picture which offers us striking clarity and lots of detail in facial features, clothes, and hair and bright, bold colors which pop but are never laid on too thickly. Skin tones are very natural. Contrast has been consistently managed throughout, and black levels are also impressive. Subtitles are occasionally used in white and are very easy to read. The movie has been divided into 18 chapters.

The DTS-HD Master Audio 5.1 sound mix is an excellent one combining the solidly recorded dialogue (rooted mostly in the center channel) with the expansive Alex Heffes background score (and some native songs on the soundtrack at various intervals) and the appropriate atmospheric effects (a late movie rainstorm/flood scene seems very real). There is a bit of directionalized dialogue though the sound design might have offered even more.

Audio Commentary: director Mira Nair tells the story of bringing the book to the screen, her casting process, and the filming in her beloved Kampala, Uganda, where she lives.

A Fork, a Spoon & a Knight (13:14, HD): Mira Nair’s short film documentary about Robert Katende who tells his story of growing up poor and alone in Uganda.

In the Studio with Alicia Keys (6:26, HD): a behind-the-scenes look at the writing of “Back to Life” and the production of its music video by its composer/artist Alicia Keys.

“Back to Life” Lyric Video (5:01, HD): the music video with superimposed lyrics on the screen.

Deleted Scenes (20:25, HD): eight scenes which may be viewed separately or together in montage, each featuring an introduction by director Mira Nair.

Despite its familiar basic narrative, Queen of Katwe draws one in to its story of a chess whiz rising from the depths of poverty with the help of a loving mentor and her family’s support. The Blu-ray offers wonderfully pristine picture and sound and comes with a firm recommendation. 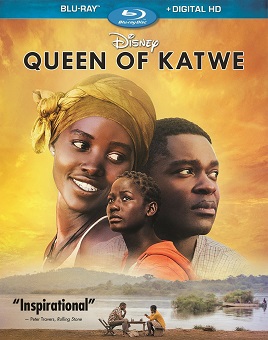