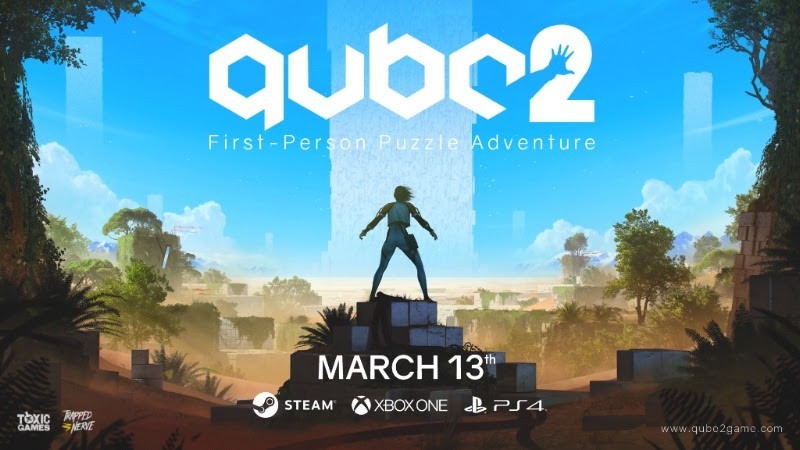 London, United Kingdom – February 12th, 2018 – Independent developer Toxic Games is proud to announce that its first-person puzzle sequel Q.U.B.E. 2 will launch March 13th, 2018 on PC, Xbox One and PlayStation 4. Q.U.B.E. 2 offers a brain-teasing adventure for fans of the original Q.U.B.E. and newcomers alike. This follow-up features an all new cast of characters, putting players in the role of archaeologist Amelia Cross as she awakens in an alien world with no memory of how she got there.

“We’re very proud of how Q.U.B.E. 2 has shaped up – no pun intended – after nearly five years of development,” said Dan Da Rocha, Managing Director at Toxic Games. “When we made the first Q.U.B.E. we were still students, but after a half decade of real industry experience we’ve put together the kind of premium product we’ve always dreamed of. We hope you have as much fun playing it as we did making it.”

Armed with a special pair of gloves that let her manipulate the environment, Amelia must navigate a monolithic structure filled with alien technologies in search of another stranded scientist, Emma Sutcliffe, to whom she communicates with via radio. Together they must find a way home. Over the course of 11 Chapters, players will step into Amelia’s shoes, exploring the structure and solving its puzzles to progress. Combine the abilities of the “manipulation gloves” with the alien architecture of the monolith for an open ended gameplay adventure featuring over 80 puzzles. In a story that explores themes of trust, isolation and humanity, thought-provoking questions about Amelia’s true purpose and the origins of the structure will need to be considered, forcing her to come to terms with a devastating truth that will shake her world.

“From production values, to voice acting, to artistic design and mechanics — Q.U.B.E. 2 is a massive leap forward from its predecessor.” – Destructoid

“After the minimalist white-walled rooms of the first game, the sequel’s crumbling temple-like structures and lush foliage were jaw-dropping.” – PC World

About Toxic Games:
Toxic Games was established in 2010 by former classmates, Daniel Da Rocha, Dave Hall and Jonathan Savery who began development of Q.U.B.E. as a student project in 2009. With advice and investment from independent game developer veterans, Indie Fund, Toxic Games were able to go from student hobbyists to independent developers upon graduation from University. Toxic Games launched Q.U.B.E. to rave reviews in 2011, receiving high acclaim from Joystiq, Videogamer, and PC Gamer. In 2014 Toxic Games releasedQ.U.B.E. Director’s Cut, adding an expanded story and enhanced graphics. Its much anticipated follow-up, Q.U.B.E. 2 will launch March 5th on PC, Xbox One and PlayStation 4.