Forum List What's new Dark Style Change width
Log in Register
What's new Search
Menu
Log in
Register
Navigation
Install the app
More options
Dark Style
Close Menu
Posted on September 29, 2016 by Matt Hough
You are using an out of date browser. It may not display this or other websites correctly.
You should upgrade or use an alternative browser.
A decent thriller with uneasy political overtones 3 Stars

A decent enough thriller with political overtones that one can easily associate with the current uneasy climate in our country, The Purge: Election Year comes to Blu-ray with a fine audio and video presentation and enough action and thrills to satisfy undemanding viewers.

A B-class thriller with A-level talent, The Purge: Election Year is the third installment in the violent thriller franchise, and with this being an actual election year, its underlying themes and suggestive corollaries between radical politics and evangelical fervor make for uncomfortable parallels to real-life events. Whether coincidental or intentional, The Purge: Election Year has a sour underbelly of truth amid its flagrant violence and action set pieces.

With the governing NFFA feeling particularly vulnerable with the Presidential election only months away, leader Caleb Warrens (Raymond J. Barry) decides their chief rival Senator Charlie Roan (Elizabeth Mitchell) must be eliminated during annual Purge Night, twelve hours in which all crimes including murder are legal. Roan’s head of security Leo Barnes (Frank Grillo) tries to make the senator’s home as safe as possible by tripling her security detail and installing safeguards in the house, but a mole on the security detail (Adam Cantor) gives access to the White Power militia group led by Earl Danzinger (Terry Serpico) who after capturing her will deliver the senator to the NFFA for purging and purification. With Roan and Barnes on the streets of Washington, D.C. on the most murderous of all nights, only his combat skills and the kindness of a few other hunted souls they meet on the night can hope to save the senator from certain death.

Writer-director James DeMonaco has helmed all three Purge films, and this one becomes a cat-and-mouse hunt for the senator not only by the militia group hired to abduct her but also by rampaging bands of lunatics out to take part in as much violence as possible. There’s a bothersome subplot with some nasty tempered girls from the hood (led by Brittany Mirabile’s psychotic Kimmy) that introduces bodega owner Joe Dixon (Mykelti Williamson) and his associate Marcos (Joseph Julian Soria) into the story, but the girls’ utterly idiotic idea that their youthfulness will be their armor against any retaliation from adults is but one of several wrong-headed notions DeMonaco has woven into the story (there’s sloppy continuity here, too, when Kimmy, who’s had her ear shot off with her first attack, comes back for more with her ear intact). The later Purge Mass of the New Founding Fathers of America inside a cathedral adds religious zealotry to the mix, another not so subtle jab equating their clearly murderous intentions with their evangelical vehemence that leaves a particularly nasty taste in the mouth, much more than all the graphic headshots and beheadings we see throughout the movie (at one point, the NFFA’s Minister played by Kyle Secor even begins speaking in tongues). Director DeMonaco keep things moving and doesn’t revel in the violence even if he does employ on a couple of occasions the cheap scare tactics of people emerging from nowhere with a huge bass thump on the soundtrack for horrific emphasis and clichéd slow motion deaths on a few occasions including the final face-off between Barnes and Danzinger.

Frank Grillo is all business and a powerful male focus in the movie abetted by Elizabeth Mitchell’s more willowy Presidential candidate. Mykelti Williamson takes the acting honors here as a small business owner trying to keep what’s rightfully his. Betty Gabriel is very effective as a street angel who prowls around on Purge Night looking to help those in need, and as Williamson’s friend, Joseph Julian Soria is quite affecting. Terry Serpico’s character may be a one dimensional neo-Nazi enforcer, but his irresistible force against Grillo’s immovable object makes for a tantalizing showdown the movie rather predictably sets up. Edwin Hodge is fine as the organizer of a Safe Zone who nevertheless seeks vengeance on Kyle Secor’s smarmy Minister Edwidge Owens.

The film’s 2.40:1 theatrical aspect ratio is faithfully rendered in a 1080p transfer using the AVC codec. Sharpness is usually very good though there are some scenes in softer focus for no good reason and an inconsistency in contrast that makes certain scenes look digitally unwieldy and crushes blacks. Color is solid throughout. The movie has been divided into 20 chapters.

The DTS-HD Master Audio 5.1 sound mix does a very professional job with using the fronts and rears to milk the tension of the street attacks sprinkled throughout the movie. Music by Nathan Whitehead and assorted rap also get woven through the entire soundstage. There are a couple of neat panning effects, especially a disoriented woman singing “Let Me Call You Sweetheart” that makes its way around the soundfield most effectively. Otherwise, dialogue has been well recorded and has been placed in the center channel.

Deleted Scenes (8:05, HD): seven scenes may be viewed individually or in montage.

Character Spotlight: Leo (3:34, HD): actor Frank Grillo describes his character from The Purge: Anarchy and discusses how he’s different in this film. Praising the actor for his toughness and dedication to the project are director James DeMonaco and actor Terry Serpico who knew he’d have his hands full in the climactic fight scene in the movie.

A decent enough thriller with political overtones that one can easily associate with the current uneasy climate in our country, The Purge: Election Year comes to Blu-ray with a fine audio and video presentation and enough action and thrills to satisfy undemanding viewers. 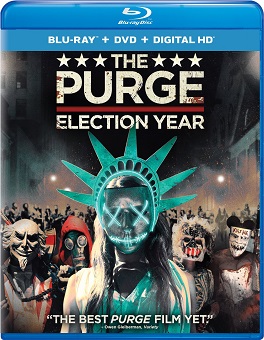