A solid prequel to Alien 4 Stars

As a sci-fi adventure thriller, Ridley Scott’s Prometheus isn’t in the same class as his masterpiece Alien, but on its own terms, there is fun to be had with the movie and some interesting concepts on the nature of man’s origin present for consideration.

With this year’s theatrical and later home video release of Ridley Scott’s latest excursion back into the world of his masterful 1979 thriller Alien called Alien: Covenant, it seems a more than appropriate time to reexamine the prequel to Covenant, Prometheus, with fresh eyes. Rest assured that H.R. Giger’s beloved monster is alive and well and living somewhere within the bowels of this entertaining and exciting sci-fi chiller. The characters, many of whom are overly brusque and often off-putting, might be the major bone of contention here with many non-fans, and while Scott’s direction of the earlier sections of the film might make things a little more muddled than they needed to be for first timers, be confident that a second or third viewing of Prometheus unveils dramatic riches and some thrilling surprises that make it more than a mere monster-hunts-humans horror film.

After scientists Elizabeth Shaw (Noomi Rapace) and Charlie Holloway (Logan Marshall-Green) make a discovery inside a Scottish cave that they think might lead them to uncovering the origins of the human race, an expedition financed by Peter Weyland  (Guy Pearce), piloted by Janek (Idris Elba), and commanded by tough-minded Meredith Vickers (Charlize Theron) brings a team of scientists in 2093 to the edge of the universe exploring a seemingly barren planet with many secrets, some of them revelatory and some of them lethal, to share lying beneath its surface. What they do find puts matters about the origins of humanity on hold as alien presences on the planet begin to have horrifying effects on several of the crew members.

The Jon Spaihts-Damon Lindelof screenplay earns points for craftily weaving some familiar elements from the various manifestations of the creature from Alien into their story, but they lose some points for creating some of the most disagreeable characters in sci-fi history. There’s little camaraderie here, and most everyone treats one another with contempt, not the best way to generate audience sympathy when various people begin to fall victim to the planet’s many terrors. The scenarists have wisely carried over the notion of an android assistant, this time one called David played by Michael Fassbender who’s in the midst of an obsession with Lawrence of Arabia. Like Ian Holm’s android from the earlier film, David plays a key role in the progression of alien life infiltrating the ship, but Fassbinder’s pleasant demeanor and willing helpfulness to all makes it hard to hold his childlike curiosity in the unusual specimens against him (knowing what we do about David from Alien: Covenant, of course, adds a fascinating additional layer to this character in this film giving him now an edge and a calculating duplicitousness that helps the tension in this film immeasurably). With the story morphing somewhat into a cat-and-mouse exercise about halfway through (it wouldn’t be an Alien film without some of that, would it?) and the writers’ and director’s inability to shock us in quite the same way with the out-of-nowhere surprise that Alien first generated, one is left admiring the magnificent production design and especially a mesmerizing sequence when David sits in a chair and pulls up a kind of intergalactic planetarium/map that is just breathtaking. One other excruciatingly effective sequence involves a cesarean section involving a crew member that blends future technology with genuine horror that is the film’s best sustained sequence.

A talented cast has been assembled, but apart from the aforementioned Michael Fassbender, only Noomi Rapace as the scientist whose interest in creation isn’t daunted by the horrific events she undergoes and Charlize Theron as a no-nonsense corporate overseer (with a surprise revelation late in the movie) give really interesting performances of depth. Logan Marshall-Green, Sean Harris, and Rafe Spall play scientists with despicable chips on their shoulders making it hard to feel sympathy for their inevitable fates, and Idris Elba is likewise pretty one note as the captain of the Prometheus. The excellent Guy Pearce is buried under so much make-up that his acting as the entrepreneur who bankrolled the expedition is almost beside the point, but it’s always nice to see him in a movie.

The film’s 2.40:1 theatrical aspect ratio is faithfully rendered in this UHD transfer at 2160p resolution using the HEVC codec. Sharpness is fine throughout, and color, while a bit more saturated than on the original Blu-ray disc, is still firmly under control with only a few moments of vivid, breathtaking splendor amid the film’s overriding use of grays and blacks. Black levels themselves can be really deep and inky, but the depths of space are sometimes a bit variable and don’t melt into the letterbox bars as one might expect. The use of HDR-10, however, is most effective especially during scenes where lightning in the skies fluoresces and clouds are rimmed with brilliant highlights. The holograms that are brought up on a couple of occasions also pop beautifully through the use of HDR. The movie has been divided into 36 chapters.

The audio sound mix is the same as that on the previous Blu-ray release: DTS-HD Master Audio 7.1. It is tremendously effective with those back surround channels used very intelligently in giving the entire soundscape a three-dimensional flair with many examples of split effects enhancing the viewing/listening experience. Bass is very deep on occasion (an approaching storm on the surface of the planet offers great reference sound quality as it builds noticeably in strength), and your subwoofer will get a great workout. Marc Streitenfeld’s music gets a most effective spread through the entire soundstage. Dialogue is always intelligible and has been placed in the center channel.

The UHD disc in the set offers the same two audio commentaries previously available and available also on the enclosed Blu-ray disc. Ridley Scott helms the first one solo offering inside information on the film from conception to release. The other combines separate commentary tracks from writers Jon Spaihts and Damon Lindelof making for a very full commentary.

The other bonuses are contained on the enclosed Blu-ray disc. Note, however, that in the previous release of Prometheus on Blu-ray, a second bonus disc of prime special material was included, all of it now missing in this new release. Here’s what’s also on the Blu-ray disc that is present:

The Peter Weyland Files (18:57, HD): includes four featurettes which can be viewed separately or together. They involve a Shaw communication, an interview with David, a Prometheus transmission, and a TED conference in 2023 allowing actor Guy Pearce to play relatively his real-life age as Peter Weyland.

As a sci-fi adventure thriller, Prometheus isn’t in the same class as Alien, but on its own terms, there is fun to be had with the movie and some interesting concepts on the nature of man’s origin, a prequel that played quite nicely into Ridley Scott’s next excursion into this world Alien: Covenant. The UHD release offers an arresting visual experience that complements the previous 3D release without really superseding it. And for those who have seen Alien: Covenant, a return to Prometheus may provide some surprises and added depths to your viewing experience that weren’t there on first viewing. Recommended!

Shame the second disc with the 'Making Prometheus' documentary isn't in here. The only way we in the UK could get this was by buying the Blu Ray 3 disc version with a 3d disc included (which I've never watched due to lack of equipment)

I don't mind double dipping if I can sell on an older edition, but I don't really want to have to keep such a bulky old set on my shelf alongside a new UHD one (with yet another Blu inside)

In my Prometheus 3D set was a DVD which I've now removed and given to a friend and replaced its spot with the 4K disc. I gave another friend the extra Blu-ray I now have, too.

Do a lot of USA Blu Ray releases come with a 'spare' DVD? - this is very rare in the UK.

KeithDA said:
Do a lot of USA Blu Ray releases come with a 'spare' DVD? - this is very rare in the UK.
Click to expand...

Yes
Expand signature
It's gonna be a hell of a ride. I'm ready. .

Ah - so this is why there such resistance to DVD becoming obsolete.
Even when I started buying Blus back in 2008, there was never a DVD in the packaging too. I've whinged enough about DVD still hanging around on other threads, but this basic difference in pack content helps explain a lot.
You must log in or register to reply here.
Share:
Facebook Twitter Reddit Pinterest Tumblr WhatsApp Email Link 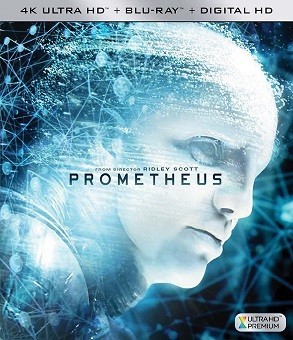