Forum List What's new Dark Style Change width
Log in Register
What's new Search
Menu
Log in
Register
Navigation
Install the app
More options
Dark Style
Close Menu
Posted on May 24, 2016 by Timothy E
You are using an out of date browser. It may not display this or other websites correctly.
You should upgrade or use an alternative browser.
Highly recommended. 4.5 Stars

“This is the history of a scoundrel.”  So begins director Albert Lewin’s film starring George Sanders, Angela Lansbury, and Ann Dvorak, with the screenplay adapted from the novel Bel Ami by Guy de Maupassant.  Sanders’ Georges Duroy certainly lives up to the definition of a scoundrel using his charm as a womanizer and opportunist in the upper echelon of Parisian society in the 1880s.

George Sanders plays Georges Duroy, an opportunistic journalist and womanizer compelled to climb his way to the top of 1880s Parisian society by whatever means necessary.  Angela Lansbury plays Clotilde de Marelle, the woman who loves Georges unconditionally to her detriment.  Character actor John Carradine(The Grapes of Wrath) is Georges’ closest friend Charles Forestier, and Ann Dvorak(Flame of Barbary Coast) plays Madeleine, Charles’ wife.  Georges’ interactions with Madeleine are particularly interesting because Madeleine is a female version of Georges in many respects, since she seems unafraid to take what she wants no matter the consequences.  Warren William(Strange Illusion) is notable here in his role as Georges’ rival, which would be William’s final screen role.

Adapted from the novel Bel Ami by Guy de Maupassant, the film follows Georges in his plots and manipulations to rise in his career as a journalist and in the social strata of Parisian society.  Georges definitely lives up to the definition  of a scoundrel as he is ruthless in using those people who can help him and discarding from his life those people who have outlived their value to him.

Director Albert Lewin(The Picture of Dorian Gray, Pandora and the Flying Dutchman) wrote the screenplay based on the novel Bel Ami and brings in 2 of the stars of his earlier film, The Picture of Dorian Gray, with George Sanders and Angela Lansbury.  The cinematography is courtesy of Russell Metty(Spartacus), which is monochrome with the exception of one screen shot which was deliberately shot in Technicolor.

The producers of this film staged a contest entitled the “Bel Ami International Art Competition.”  Eleven noteworthy artists were invited to submit their conceptions of the story of St. Anthony, which ties into the themes in the film and plays its own part as an object of desire for the parents of one of Georges’ romantic conquests.  The entry by Max Ernst was selected for Technicolor glory in the film, from a field of artists that included Salvador Dali, Eugene Berman, Dorothea Tanning, and Leonara Carrington.  Many critics have applauded Lewin’s use of color for that single shot as a successful “shock” to the audience’s visual palate.

The film’s original screen aspect ratio of 1.33:1 is presented in this 1080p transfer using the AVC codec.  Fine detail and shadow detail are particularly excellent in this restoration funded by UCLA and Martin Scorsese.  Fine grain is consistently visible and has not been digitally scrubbed away along with fine detail.  The restoration has not eliminated fine scratches originating on the emulsion of the print from which this transfer was derived.  If the screen images were not so sharp, the fine scratches probably would not be visible.  Although a good portion of the transfer has such scratches visible, they are so fine and small that they do not detract much from what is a very high quality presentation of the film.

The Dolby HD MA 2.0 English audio provides a quality audio presentation with no audible hiss and reasonable dynamic range considering its source.  There are no flaws apparent in the audio.

There are no special features in this edition.

Fans of Pandora and the Flying Dutchman or The Picture of Dorian Gray will find much to stimulate and entertain them in this film directed by Albert Lewin, which has certain themes and ideas in common with those other films.  The Private Affairs of Bel Ami has a great cast, many of whom were in their prime in this film.  The video and audio presentation are very nice, even in the absence of any special features.  The film is the thing here, and The Private Affairs of Bel Ami is worthwhile viewing as a film that has stood well the tests of time.

Thank you for the review asI have this BD title, I don't remember ever seeing this film so hopefully, it appeals to me.

I've never seen this but because of this good review, I'm going to get it.

Now, we need Richard Gallagher (fingers-crossed) to review "The Chase".
You must log in or register to reply here. 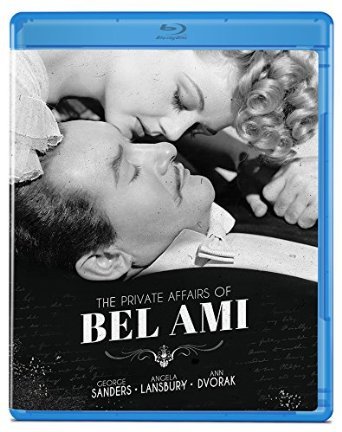