A very mediocre thriller, Priceless, despite having its heart in the right place advocating for the end of human trafficking and a regeneration of respect for women, lacks basic suspense and logical narrative development.

A faith-based excursion into the theme of human trafficking might lend gravitas to Ben Smallbone’s Priceless, but the film’s triple aims of attempting to be a docudrama, a thriller, and a romance all fall notably short of success. The spiritual among us may find the movie’s underlying pronouncements for the necessity of faith-based values and the sanctity of women to be noble and important, but bringing these themes to light in cinematic terms is much more difficult than simply turning on a camera and having some actors enact a simplistic story which lacks motivation and good old common sense.

Desperate to earn some money to support his young daughter (Sierra Rose Smith) after the death of his wife and the loss of his job, James Stevens (Joel Smallbone) agrees to carry unknown cargo across country with no questions asked (he’s been assured he isn’t hauling drugs). A minor traffic accident leads him to the discovery in the cargo area of two Mexican sisters Antonia (Bianca A. Santos) and Maria (Amber Midthunder) who are being carried to New Mexico, they think to work as waitresses but actually to become prostitutes in a motel brothel and at a massage parlor. At first James accepts his hefty fee from head pimp Garo (Jim Parrack), but his conscience begins to get the better of him as he realizes these innocent young women (one still a teenager) are being treated as property and not as human beings. The devout owner Dale (David Koechner) of the motel where James is staying gently nudges James into making a decision to go back and free the girls but doing that won’t be so easy since they’re guarded by Garo’s assistant CJ (Travis Hammer) and the traffickers have an “in” with local law enforcement Officer Melton (Luce Rains).

The screenplay by Chris Dowling and Tyler Poelle doesn’t give any of the characters very much intelligence. From James who seems clueless at so many junctures along the way (including not realizing that the thugs can track him to Dale’s home which they’re using as a sanctuary to his assuming all of the lawmen in Albuquerque are corrupt because of the one bad apple he must face down – conveniently the first policeman he comes into contact with) to Garo who chooses the most public place to do final prisoner exchange with James, these are not people operating with full decks. Though director Ben Smallbone does show some talent behind the camera (a slow reverse tracking shot of the disconsolate Maria is very effective in showing her isolation and hopelessness), the thriller aspects of the narrative are meager and decidedly lacking suspense (a search by the bad guys of the motel where James is staying while he’s on the phone with his daughter, the rescue of Antonia from the Chinese massage parlor) and the romance kind of comes out of nowhere and isn’t well set up (just because the two leads are attractive doesn’t mean they’re meant to be together). Of course, the faith-based qualities of the storytelling and characterizations are pretty heavy handed especially the longer the film runs (Garo and Dale debate Old Testament versus New Testament views of behavior), and the dialogue sometimes is really ham-fisted: “the flames of tragedy can refine you,” says the earnest Dale.

Disguising his Australian accent very well, Joel Smallbone (lead man for the Christian rock group For King & Country) does an adequate job as James. He’s well-meaning and has soulful eyes which serve him nicely in conveying his finding his conscience a third of the way through the movie. Bianca A. Santos is adequate as Antonia, too, the victim who stubbornly refuses to leave with James without her sister (being kept in another room) in tow. Better, more secure performances are offered by two veterans in the cast: David Koechner as the soft-spoken but determined Dale and Jim Parrack as the remorseless trafficker Garo. Travis Hammer is a suitable flunky as CJ, and Luce Rains has that redneck police officer patter down pat.

The film is presented in a 2.40:1 aspect ratio and is offered in 1080p resolution using the AVC codec. While sharpness is generally good, some scenes seem a bit softer than others. Color saturation levels are steady with consistent and realistic skin tones. Contrast might occasionally be on the milky side for no reason, and black levels are good but not great. The movie has been divided into 20 chapters.

The DTS-HD Master Audio 5.1 sound mix doesn’t use its full soundstage apart from its music cues, a song by For King & Country, and some ominous bass added to simulate suspenseful events unfolding (even if what’s on screen isn’t always suspenseful). Dialogue has been well recorded and has been placed in the center channel. Ambient sounds tend to be directed more to the front channels than to the entire surround soundstage.

Exclusive Performance by For King & Country (16:39, HD): excerpts from several songs and patter from a sold out arena show by the Grammy-winning rock band.

The Making of Priceless (10:00, HD): brothers Ben (director) and Joel (star, producer) Smallbone take us through the eighteen-day shooting schedule for the movie. Also commenting on the production are actors Bianca Santos, Jim Parrack, and David Koechner.

The Heart Behind the Film (3:56, HD): the brothers Smallbone explain their reasons for making the film and their hopes for its themes to be taken up across the world.

Deleted Scenes (12:16, HD): six scenes can be watched individually or using the “Play All” feature.

“We Can Start Again” Ballad Trailer (2:04, HD): the song the band wrote for the movie is presented over the film excerpts trailer.

A very mediocre thriller, Priceless, despite having its heart in the right place advocating for the end of human trafficking and a regeneration of respect for women, lacks basic suspense and logical narrative development. A decent video and aural presentation only goes so far when the writing is so lacking in spite of everyone concerned’s best intents. 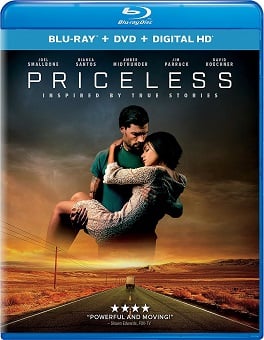