Predator has a very special place in my heart. I love the film. I love everything about it and can watch it once or twice a year with the same engagement and thrill as if it were my first time. And I know I am not alone. There are legions of fans who share an equal sense of admiration and love for Predator (though we all have varying levels of love and appreciation for the sequels so far). Its flaws and one-liners are part of its charm, but it’s a thrilling action picture that has stood the test of time, elevating a solid piece of ‘genre’ filmmaking into classic status. And a classic it most certainly is.

“There’s something out there waiting for us, and it ain’t no man. We’re all gonna die.”

In the unforgiving jungles of South America, Dutch (Arnold Schwarzenegger) and his crack team of commandos have been deployed to rescue a captured diplomat from well-armed rebels. Tagging along against his wishes is Dutch’s old buddy, Dylan (Carl Weathers), who now pushes pencils for the intelligence community. On the ground, the team soon discovers that the rescue mission story was a ruse, but that’s the least of their worries. The jungle holds a deadlier menace and the team is lethally stalked by a hunter that can camouflage itself among the jungle canopy, with superior weapons and technology. They have become prey.

Predator is an action classic with a rich, fertile concept that exploits the muscular cast and jungle settings expertly. Outside of the first two Terminator films, Predator is Schwarzenegger’s crowning achievement. While Arnie rattling off a few humorous quips likely helped Predator become beloved, it is the steelier, serious side that he displays that ultimately serves the film best. Among a curious mix of characters that range from tobacco chewing macho to wiry comic relief, Arnold’s Dutch is a strong, effective leader with an instinct for the danger he and his team are in. Ultimately, Dutch has to use his military training and wiles to try and outsmart a vastly superior force, and that makes for a very interesting proposition. Besides the now legendary alien creature design and impressive special effects, it is Predator’s assortment of memorable characters, and the actors who brought them to life, that are key to the film’s success. Carl Weather’s CIA man, Dylan, who’s questionable loyalty to Dutch makes him a short-term fly in the team ointment, is intense and very good. His interplay with the outfit raises internal tensions in all the right places. Bill Duke’s quiet character, Mac, is imposing and a little odd in how he reacts to tragedy, and that makes him a fun curiosity. Jesse Ventura’s tobacco chewing mercenary-type is a scene stealer. Sonny Landham’s Billy, a man in tune with their terminal predicament, is serious and likeable, and his reaction to Shane Black’s Hawkins character is even a little charming. Richard Chaves’ Poncho rounds out the crack team, and he gets a few good lines himself. Elpidia Carrilo’s Anna, someone the team captures during what they thought was a rescue attempt for the captured diplomat, equips herself nicely against testosterone-heavy cast.

Special mention goes to Kevin Peter Hall, the very tall actor behind the predator character. What the late actor does behind such heavy effects is quite something, giving a very good and memorable performance that defined how we now expect the predator to behave. Hall played the predator again in the first sequel, but died shortly after in 1991. The movement of the predators in 2010’s Predators and the two Aliens vs. Predator movies have never been as good as Halls delivery.

The unabashed machismo and unembarrassed embrace of cheesy quips and one-liners adds to Predator’s charms, but it’s the raw expression of the films ideas, the solid direction under what appear to be difficult conditions, and the pitch-perfect casting and execution of its visual and practical effects that elevate Predator from good to great. The combination of muscle, monsters, and high-tech concept is manna from heaven to many, including those like me who were on the edge of manhood when they first encountered the film. The sign of a great film, one that sets it apart from the myriad of other films that we might enjoy from year to year, can be how it holds up and stands up years later. Here we are, just over 30 years since Predator first landed on the big screen, and it holds up wonderfully.

Filmed on 35mm stock in some challenging conditions, Predator on home video has a less than stunning history. It’s most onerous release was 2010’s Ultimate Hunter edition that scrubbed the image to within an inch of its life (check out Matt Hough’s fine review of that release). Now, Fox has outdone themselves with as perfect a presentation of this film as we could have hoped for. In short, Predator on UHD is a stunner. All of the flaws and missteps from Fox’s previous home video releases, especially the notorious Ultimate Hunter edition, have been done away with. This is a thing of beauty and the addition of HDR grading provides an even more pleasing saturation to colors.

The image is finely detailed, with appropriate grain (such glorious grain), excellent contrast, and strong black levels. Colors are balanced nicely, with the greens of the jungle and glowing green of predator blood popping at times. Some moments are a little soft, but that’s due to the source. The heavy mist used throughout the production mean that not everything is lush and crisp, but again, that’s what it’s supposed to look like. But with flesh tones looking so natural, and skin pores and fabric details in close-ups looking so marvelous, this release knocks it out of the park.

Audio-wise, Fox offers up the same DTS-HD Master Audio track from the earlier Blu-ray release. While no Dolby Atmos or 7.1 mix, the 5.1 mix delivers a suitable experience driven largely by Alan Silvestri’s energetic, propulsive and addictive score. It’s filled with plenty of bass-boom, clear dialogue focused in the center channel and a good spread of gunfire across the fronts and, in the chaos of battle, the surrounds at times too.

Director John McTiernan contributes a relatively mundane audio commentary as he languidly describes his memories of making the movie. Fans of the film will want to hear what he’s got to say, but it’s a pretty long slog as the director struggles to remember the movie after being away from it for so long.

Film historian Eric Lichtensfeld contributes a text commentary offering up trivia about the movie and interviewing various filmmakers about aspects of the film. These comments appear in white subtitles that are easy to read and may be turned on and off on the fly during the movie.

“Evolution of the Species: Hunters of Extreme Perfection” is actually a long, low bow to the makers of Predator by the makers of the upcoming film Predators. Director Robert Rodriguez along with Nimrod Antal and others describe their impressions of the original movie. Rodriguez also describes the sequel he wrote years ago in this 11 ¼-minute featurette in 1080p.

“If It Bleeds, We Can Kill It” is a making-of documentary featuring interviews with the leading actors, the director, producer, writers, director of photography, production designer, stunt coordinator, and special effects supervisor, all discussing their work on the project. Presented in 480i, this runs 28 ¾ minutes.

“Inside the Predator” is an omnibus title for a series of seven short featurettes on various aspects of the production: “Classified Action (5 ¼ minutes) gives details on the stunt work, “The Unseen Arnold” (4 ¾ minutes) is a homage to the star of the movie, “Old Painless” (3 ½) details the gatling gun used by Jesse Ventura in the movie, “The Life Inside” (4 ½ minutes) is a loving tribute to the late Kevin Peter Hall who played the alien, “Camouflage” (5 minutes) introduces the film’s makeup artist talking about the various facial camouflage designs for the leading actors, “Welcome to the Jungle” (2 ¾ minutes) deals with various location stories told by the cinematographer and production designer, and “Character Design” (3 minutes) has the actors talking about the characters they play. All are in 480i.

There are two special effects featurette sections: three ½-minute vignettes on the “Red Suit Special Effects” and two ½-minute shots of the alien’s jungle camouflage tests. They’re in 480i.

Four short take featurettes on the film are offered: “John McTiernan on Learning Film” (3 minutes) finds the director talking about his film school experiences, “Jesse’s Ultimate Goal” (2 ¼ minutes) has the former wrestler talking about his strategy for an acting career, “Stan Winston’s Practical Joke” (3 minutes) has the creature builder relating an embarrassing moment for him ten years after the film premiered, and “Don’t Drink the Water” (1 ¾ minutes) retells a familiar story about the effect the water had on the systems of several of the actors. They’re in 480i.

A selection of photos is arranged in a gallery which can be stepped through by the viewer. There are both stills from the movie and behind-the-scenes shots of the actors and crew.

A Predator Profile can be stepped through by the viewer. It offers photos and text descriptions of the creature and his weapons arsenal.

Predator works because it’s a lean, efficient, and effective action thriller. Perhaps most importantly, it’s very entertaining and holds up remarkably well all these years later. For director John McTeirnan, Predator turned out to be the first of his three greatest films (Die Hard and The Hunt for Red October make up the other two in my opinion). The amount of quotable lines, the fascinating design of the predator, the use of the heat vision effect, the marvelous invisibility effect, and the memorable collection of characters all come together into something greater than the sum of its parts. Now on 4k UHD, Predator looks spectacular! 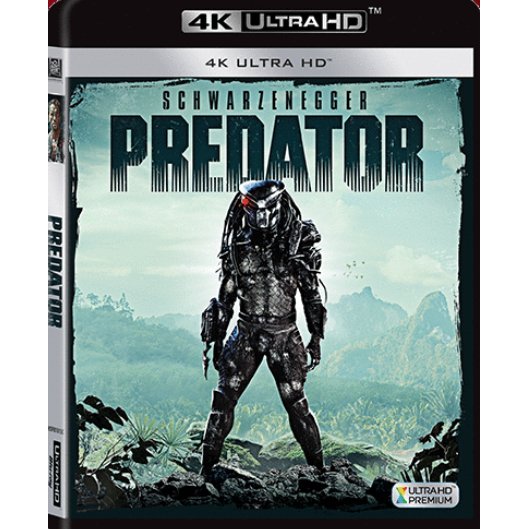