Forum List What's new Dark Style Change width
Log in Register
What's new Search
Menu
Log in
Register
Navigation
Install the app
More options
Dark Style
Close Menu
Posted on April 11, 2020 by Matt Hough
You are using an out of date browser. It may not display this or other websites correctly.
You should upgrade or use an alternative browser.
Inspired insanity from the makers of Airplane! 4.5 Stars

When the brilliant creators of Airplane! decided to bring their talents to television, the result was Police Squad!, a half hour farcical parody of the cop show genre.

When the brilliant creators of Airplane! decided to bring their talents to television, the result was Police Squad!, a half hour farcical parody of the cop show genre. If Airplane! hilariously deconstructed the disaster movie airplane-in-danger scenario (specifically the Airport franchise and especially Zero Hour!), then Police Squad! did the same for the likes of M Squad, Dragnet, Felony Squad, and most of producer Quinn Martin’s procedurals. As creative and wacky as the show was, it was destined not to last: this kind of wild farce filled with verbal and visual puns, gags, slapstick, and silliness tends to burn through ideas faster than the speed of light necessitating repetition of the gags with slight alterations, thus making the farce more predictable and less funny with each subsequent episode. The producers also claimed that unlike a feature film that pretty much demands your attention away from home, a television show in familiar surroundings allows for a multitude of distractions in the home, pure death for a show that absolutely demands that you pay strict attention to catch every visual and verbal joke. Police Squad! likely exhausted its audience. ABC canceled the show after four airings (though six episodes were produced and subsequently rerun).

But they are a glorious six episodes. Bringing his deadpan comic persona to television from Airplane!, Leslie Nielsen stars as Detective Lieutenant Frank Drebin, lead investigator of Police Squad. Along with his boss Captain Ed Hocken (Alan North), the intrepid detective investigates a bank robbery, corruption in boxing, a kidnapping, a series of bombings of legal professionals, a neighborhood protection/extortion racket, and a drug smuggling operation, sometimes going undercover as a boxing manager, a local merchant, or a nightclub entertainer. Contained within each episode are formula destinations Frank heads for in order to assist in his investigations: visits to Mr. Ted Olson (Ed Williams), the squad’s forensic scientist, and local shoeshine boy/informant Johnny (William Duell) who has the inside skinny on anything and everything anyone needs for his work, for the right price, of course (and Frank isn’t the only one who uses his services; he’s pumped for information by, among others, Dr. Joyce Brothers, baseball manager Tommy Lasorda, and Dick Clark). Along with Rex Hamilton who appears as Abraham Lincoln in every episode’s opening credits (but nowhere else), special guest stars like William Shatner, Lorne Greene, Florence Henderson, and William Conrad abound, all killed off in spectacular fashion before the credits are done.

While there are fresh verbal and visual puns in every episode, the shows also rely on tried-and-true gimmicks as well. People walk on the wrong side of set pieces, cigarettes are constantly offered to those afflicted only to be notified that they are, indeed, cigarettes, elevator rides sometimes take on passengers of a different occupation on a different floor to the police station, an abnormally tall detective stands out of the frame conversing with the other actors while a little person occasionally stands out of camera range until he’s the punch line of a size joke. The writers come up with hilarious “freeze frames” for use during the closing credits, always interrupted by something going amiss, and the Act II title card (a Quinn Martin trademark) always carries with it a jokey capper. Peter Lupus brings his mammoth presence to four of the six episodes as the simpletonish Detective Norberg, usually bungling into or out of scenes. But it’s the constant barrage of literal understandings, non sequiturs, inside jokes (the show is “in color,” the number of trash cans Drebin knocks over with his car indicates which episode it is), and sight gags that makes Police Squad! absolutely unique in the history of American television. It makes the wackiness of F Troop seem like something written by Arthur Miller.

*1 – A Substantial Gift (The Broken Promise)

2 – Ring of Fear (A Dangerous Assignment)

4 – Revenge and Remorse (The Guilty Alibi)

5 – Rendezvous at Big Gulch (Terror in the Neighborhood)

The television aspect ratio of 1.33:1 is faithfully reproduced in these 1080p transfers using the AVC codec. The shows look, for the most part, fresh and sharp and colorful with excellent contrast and no age-related markings or scratches (except where scratches are deliberate in obvious rear projection transmissions). “The Butler Did It” looks a bit on the brownish side, and there are occasional scenes where contrast seems artificially pumped up and unnatural, but, on the whole, these episodes have never looked better.

The disc offers the choice of DTS-HD Master Audio 5.1 or the original broadcast mono in Dolby Digital 2.0 (decoded by Prologic into the center channel). The repurposed 5.1 channel is a hilarious adaptation of the original sound mix with deliberately active surrounds present with every shot, pinging bullet, explosion, or ricochet. Expect the unexpected with this mix, perfect for the off-the-wall antics which are being pictured on the screen.

All of the previous special features from the DVD set have been ported over into this Blu-ray set, but all are in standard definition.

Audio Commentaries: producers David Zucker, Jerry Zucker, Jim Abrahams, and Robert K. Weiss break themselves up constantly in the commentaries for episodes 1 and 3. While they do impart some behind-the-scenes information between their guffaws, they sometimes become engrossed in the episode not having seen them in so long or wrack their brains attempting to remember certain specifics of the production problems they faced. Writer Robert Wuhl offers a fairly dull commentary for episode 6.

Leslie Nielsen Interview (8:41): many years after the fact, Nielsen reminisces about the making of the series and their disappointment over its low ratings.

Production Memo Highlights: five memos including the notice of cancellation

Behind the Freeze Frames (4:31): an elaborate freeze frame involving a fire inevitably not used

While Police Squad! was inevitably cancelled to everyone’s dismay, the producers had the last laugh when six years later, they brought their concept to the movies and produced The Naked Gun, a smash hit which fostered two sequels. The original series, however, in all its stupendous stupidity and absurdity remains the high water mark for inspired insanity. Highly recommended!

Because "M Squad" was a forgotten series to most people in the early 1980s, a lot of people didn't realize that "Police Squad" was doing a direct parody of that show specifically in the way "Airplane" did with the movie "Zero Hour." The jazzy theme music opening credits is a total steal of the Season 2 "M Squad" opening, and one episode of "Police Squad" in fact totally cribbed the dialogue of an "M Squad" episode with hardly a change!

Jack P said:
Because "M Squad" was a forgotten series to most people in the early 1980s, a lot of people didn't realize that "Police Squad" was doing a direct parody of that show specifically in the way "Airplane" did with the movie "Zero Hour." The jazzy theme music opening credits is a total steal of the Season 2 "M Squad" opening, and one episode of "Police Squad" in fact totally cribbed the dialogue of an "M Squad" episode with hardly a change!

That's exactly what they did with the dialog from Zero Hour. It's really hard to watch that movie after seeing Airplane due to the massive amounts of lifted dialog. You hear it in Zero Hour and in your mind see the visuals from Airplane.

Now I'm going to have to look for some episodes of M Squad...

One of my favorites to watch when I need a good laugh. It's a shame it was a short series.

I rewatched The Naked Gun tonight since I hadn't watched it in probably a decade, but seeing Police Squad! again whetted my appetite for the absurd. Very funny but I don't think George Kennedy or O.J. Simpson are patches on Alan North and Peter Lupus. SOme of the gags in the film are lifted straight from Police Squad! including Big Al with the piece of banana on the side of his mouth. I missed Johnny as the informant.

I watched Police Squad when it was new on TV, and loved it. I was glad to see it revived as a movie several years later. Waiting on my blu-ray to arrive this week.

I watched every episode of POLICE SQUAD! in high school and remember thinking it was doomed for being too smart for TV. I wish the disc included John Belushi's guest star cameo of him in a pool, which was cut for obvious reasons but might be his last filmed appearance? I also prefer the Leslie Nielsen of the series to the films, who acted more aware than the TV's Drebbin's focused idiocy.

I didn't have any of the films on Blu-ray, so I bought the three-pack and will reacquaint myself with them over the next week or so. So many things I want to watch.

I have this series on DVD and have watched it for years. My question is whether or not it benefits enough from being on Blu ray to replace the set. Except for being able to count everybody’s nose hairs, is there any advantage to the new format?

It's a shame the Naked Gun blu ray set didn't get new transfers, or add any new content, or even bring over the commentary tracks from the DVDs.


Matt Hough said:
I didn't have any of the films on Blu-ray, so I bought the three-pack and will reacquaint myself with them over the next week or so. So many things I want to watch.
Click to expand...

TJPC said:
I have this series on DVD and have watched it for years. My question is whether or not it benefits enough from being on Blu ray to replace the set. Except for being able to count everybody’s nose hairs, is there any advantage to the new format?
Click to expand...

Well, as I said in the review, there are no new bonuses, but I could see a difference in quality (my TV would upconvert the HD signal; to 4K), and that was important to me. This is the best one of my favorite shows of all time will look. Your mileage may vary.

I watched the second Naked Gun film tonight on Blu-ray. It's coming back to me now that the quality of the films decreased with each sequel.
You must log in or register to reply here. 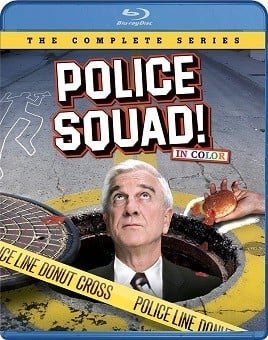