Warner’s surprise hit of the summer, Pokémon: Detective Pikachu, is a cute but very odd movie that looks and sounds great on 4K UHD Blu-ray.

Tim Goodman (Justice Smith) gets word that his estranged father Harry was killed in a car accident while investigating a case for the Ryme City police force. Tim travels to Ryme City, where humans and Pokémon live together in harmony, to retrieve his father’s belongings and is quickly befriended by an annoying little Pikachu (voiced with much hilarity by Ryan Reynolds). Pikachu was his father’s Pokémon, who quickly convinces Tim to investigate his father’s death. As they follow the clues, they discover a sinister underground where humans pit their Pokémons in illegal battles where many are dosing them with a chemical simply referred to as “R” that turns them violent and enhances their abilities. The clues ultimately lead them to Howard Clifford (Bill Nighy), a conglomerate executive who founded Ryme City. Howard plays back Tim’s father’s fateful crash, leading them to a secret laboratory on the outskirts of the city which may possess the evidence both Tim and Pikachu are looking for.

To be honest, I’ve never been much of a fan of Pokémon, so I was a bit lost as they introduced man of the different types of Pokémons throughout the movie. Luckily, my ten year old niece was with me during my screening to explain what some of these creatures could do and their basic personality. That may be one of the film’s handicaps for the uninitiated, while having the exact opposite effect on true fans of the franchise. The plot is overly complicated when it probably doesn’t need to be, with lots of subplots that go nowhere, all the while borrowing heavily from other movies. The real standout is Ryan Reynolds as Pikachu, who carries much of the movie through his voice over work. Justice Smith has much of the same screen charisma as his father Will, often sounding like his father. Pokémon: Detective Pikachu isn’t a truly awful movie, its mediocre, as I did find much of it entertaining.

Pokémon: Detective Pikachu was photographed on 35mm film and then completed as a 2K digital intermediate. Warner’s 2160p upscale has added HDR10 color grading, and the result is a nice upgrade from the included Blu-ray. The film gets a small bump in fine detail, giving the individual hairs in Pikachu’s fur a more refined appearance. The high dynamic range gives the colors a more natural range of tones and with the improved contrast, shading is more accurate, blacks are deeper without crushing and whites are brighter without clipping. There are also no noticeable compression artifacts such as banding, pixilation, etc.

Warner has given Pokémon: Detective Pikachu a default Dolby Atmos track that reverts to Dolby TrueHD 7.1 for those not equipped. The track is a lively one, with sounds travelling seamlessly and accurately around the room. The big parade during the third act is extremely immersive, placing you in the middle of the crowded streets. LFE is strong and robust without ever sounding boomy. Dialogue is clear and understandable throughout, placed mostly upfront except where needed. Warner has also included a lossy Dolby Digital 5.1 track encoded at 448 kbps.

The UHD disc contains no special features whatsoever, but they can be found on the included Blu-ray edition. Warner appears to be following in Universal’s footsteps with a redesigned menu with the Special Features appearing in a vertical strip along the right side of the screen.

Detective Mode: A picture-in-picture and pop-up track that runs alongside the movie, featuring trivia, behind the scene footage, and interviews.

My Pokémon Adventure (1080p; 2:13): Justice Smith discusses how he and his sister grew up playing, collecting, and watching the various Pokémon products.

Creating the World of “Detective Pikachu” (1080p; 21:22): A five-part look behind the scenes of the movie, playable as one featurette or each part individually, including Uncovering the Magic, Colorful Characters, Bringing Pokémon to Life, Welcome to Ryme City, and Action!.

Pokémon: Detective Pikachu is a cute but very odd movie that looks and sounds great on 4K UHD Blu-ray and special features that are more fluff than anything else. 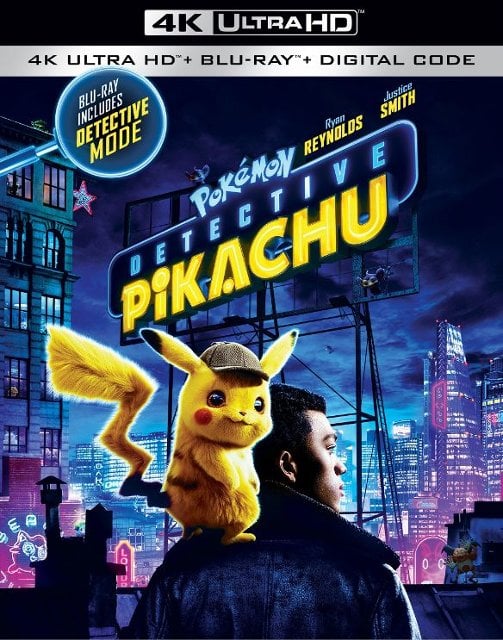