Forum List What's new Dark Style Change width
Log in Register
What's new Search
Menu
Log in
Register
Navigation
Install the app
More options
Dark Style
Close Menu
Posted on February 12, 2019 by Todd Erwin
You are using an out of date browser. It may not display this or other websites correctly.
You should upgrade or use an alternative browser.
A scattered, unfocused sophomore effort 4 Stars

It must be tough to have a movie like Boyz n the Hood as your directorial debut and receiving Academy Award nominations for Best Director and Best Original Screenplay right out of the gate. That is a tough act to follow, and John Singleton came back quickly just two years later with Poetic Justice, this time taking the female perspective of growing up in South Central Los Angeles by following a young African American girl, Justice (Janet Jackson), who works at a beauty salon and, as the film opens, witnesses her boyfriend gunned down at the drive-in movie theater while seated next to him in his car. She has sworn off men and relationships, blowing off would-be callers at the salon, including postal worker Lucky (Tupac Shakur), with help from her boss and salon owner, Jessie (Tyra Ferrell), who has invited Justice to attend a hairstylist conference in Oakland the next day, along with a few of the other hairdressers in the salon. The next day, Justice finds that her car won’t start, so she calls up her friend Iesha (Regina King), who happens to be travelling to Oakland with her boyfriend Chicago (Joe Torry) and his co-worker Lucky in a postal van (they are transporting a few bags of mail from Los Angeles to Oakland?). This does not sit well with Justice, but in desperation to get to Oakland, she agrees. The sparks quickly fly between the two, and the foursome stop off to have a few adventures, including crashing a family reunion picnic and stopping at a roadside carnival, eventually ending up in Oakland, seemingly falling in love until Lucky discovers that his favorite Uncle, living in Oakland, was just killed by gang violence.

Poetic Justice is an uneven film, delving into comedy, drama, poetry (with help from Maya Angelou, who also has a cameo in the film), romance, street violence, and drugs, but at times feels somewhat amateurish (the fight in Angel’s apartment is a good example). What we get is a rather meandering road picture that doesn’t provide a whole lot of character development, despite the long stretches of dialogue between are four leads. It is a disappointing sophomore effort from a director that never quite reached the heights of his first film again.

It is hard to believe, but Poetic Justice is finally making its Blu-ray debut almost 20 years after it was first released on DVD. Sony’s AVC-encoded 1080p transfer faithfully presents the film in its theatrical aspect ratio of 1.85:1, with natural and well-saturated colors that never bloom or bleed. Detail is excellent, from the textures of the braids of hair worn by the two female leads to facial features and even blades of grass during the family reunion sequence. Contrast is excellent, with deep black levels even during some of the darker night time sequences. Film grain is organic and never intrusive or distracting. There were a few instances of very minor specks of dirt on the image, but only if you are really looking for it, as it is never distracting.

Poetic Justice was released to theaters with a Dolby Stereo Spectral Recording matrixed surround track, which translates rather nicely on the included DTS-HD Master Audio 2.0 stereo track. Dialogue is clear and understandable throughout, directed mostly to the center channel when using a Pro-Logic or similar surround decoder (like DTS Neural:X). Music and effects are spread across the front channels, with some activity in the rear surrounds, giving a sense of some immersion. Frequency response and dynamic range are very solid, providing an impressive deep end you rarely find in a 2.0 stereo track.

Audio Commentary with John Singleton: Originally recorded for the 1999 DVD release, Singleton reflects on his desire to follow-up as soon as possible to his debut feature, how he was able to cast Janet Jackson, and other tidbits of information.

Revisiting “Poetic Justice” with John Singleton (1080p; 9:38): Singelton covers much of the same key points of his older commentary in this interview, new to this release.

Janet Jackson & Tupac Shakur’s Screen Test (1080p; 2:12): Singleton speaks between dialogue exchanges in this screen test that was made to show the studio that these two actors had screen chemistry.

Deleted Scenes (1080p; 14:34): A total of ten scenes are included – Day at the Salon Extended, You Heard About Derek, Closing Time at Salon, Lucky Home with Daughter, Justice Scared at Night, Road Trip Pee Break, Road Trip Diner Stop, In the Liquor Store?, Toothpick Joke, and Carnival at the Park.

Fans of Poetic Justice will definitely want to pick this one up, a definite upgrade to the 1999 DVD.

I recently saw Poetic Justice on Blu; this was my very first time seeing the film.

Very stellar, well-done movie. The story here was poignant, and the leads were great. I've never seen the late Tupac Shakur or Janet Jackson in any other film (that I can remember), and it's nice to see that two people who are best known for their music - can also act.

I also really enjoyed the scenery of the California Coast; the ocean scenes were especially impressive.

Not that familiar with Maya Angelou's poetry, but these poems really added to & enhanced the film; the score obviously added a lot as well.

Though the film was obviously a drama, there were some comedic moments. One of my favorites was Justice's white-furred cat being named "White Boy" - LOL.
You must log in or register to reply here. 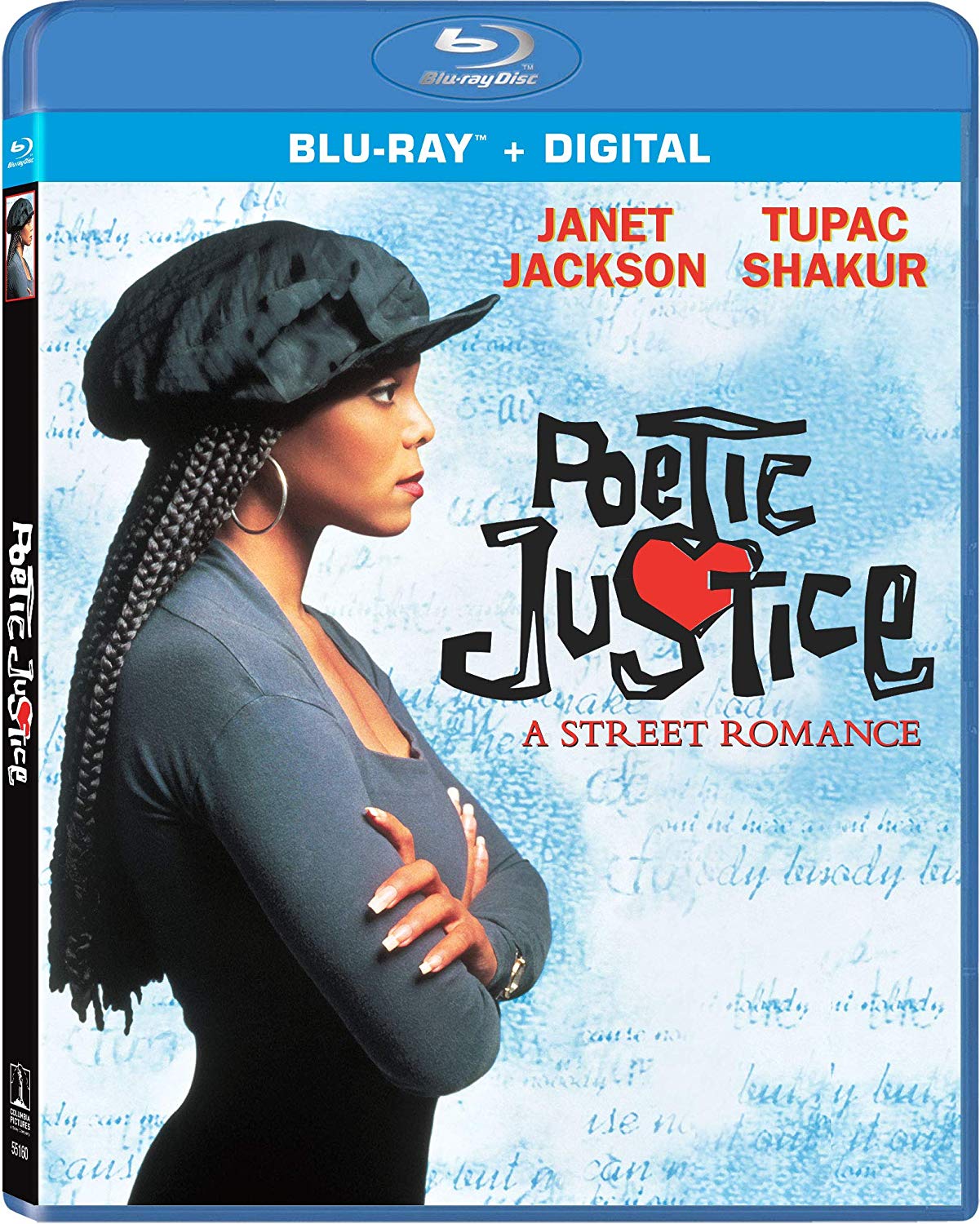