Playmobil: The Movie, based on the popular German toys, is a sad attempt to cash in on the more popular LEGO Movie, becoming nothing more than a sad 100 minute advertisement for the product.

Marla (Anya Taylor-Joy) is turning 18, ready to leave her family for adventures before starting college, as she sings about it to her younger brother Charlie (Gabriel Bateman). Everything comes crashing down when they are interrupted from playing with Charlie’s Playmobil toys by a knock at the door – two police officers have arrived to let them know that both of their parents have just died. Four years later, and Marla is now taking care of Charlie (in the same house). Marla regrets not having the chance to go on her planned adventures, and Charlie finds her a complete bore. One evening, Charlie runs away to a toy convention, sneaking in after hours. Hot on her trail, Marla finds him inside the Playmobil exhibit, a vast layout of lands centered around a tall lighthouse, which suddenly sucks the brother and sister into the lands of Playmobil for no reason other than to transport us to the animated section of the film. Charlie has been transformed into his favorite character, a blonde Viking, yet Marla is just a plain-looking girl. The Vikings take Charlie away to the evil Emperor Maximus (Adam Lambert), leaving Marla behind to travel to the various lands in search of her brother. Marla teams up with food truck driver (and mystical hay dealer) Del (Jim Gaffigan) and superspy Rex Dasher (Daniel Radcliffe) as they search for Charlie.

Playmobil: The Movie doesn’t have a single original bone in its body. Del owes money to a mobster by the name of Glinara (Maddie Taylor) that looks like a female Jabba the Hutt from the Star Wars movies. The plot device that delivers Marla and Charlie is stolen from Tron. That’s just to name a few. Then there are the inconsistencies – when Marla arrives in the Playmobil world, she moves like the actual figurines to what is supposed to be humorous (a lack of knees and elbows), and then suddenly, she’s able to move freely with… knees and elbows. One thing the LEGO movies did well was stick to their own world rules, where everything appeared as if it was built from the actual toy building bricks, but Playmobil: The Movie breaks those rules (even though this is supposed to be an actual toy exhibit), as many of the locations and vehicles often look CG rather than photo-realistic toys. The jokes and songs (yes, the characters sing lots of songs) are flat and not even sung very well. Parents will be bored stiff from this dreck, although the wee ones may enjoy it as background fodder while playing with their Playmobil (or Duplo) toys.

STX (via distributor Universal) has opted to release Playmobil: The Movie on DVD and digital only. The DVD sent for review is overly soft, possibly helping with the second-tier animation. Colors are vivid (at least for a BT.601 colorspace) without appearing overly saturated. Black levels are adequate with minimal crushing.

About the only thing going for Playmobil: The Movie is its loud and active Dolby Digital 5.1 soundtrack, encoded at 448 kbps. The track has a wide front soundstage, with dialogue panning as characters move across the frame. Surrounds are active with cheering crowds, traffic noises, etc. LFE is adequate, providing a nice low end to the track.

Nothing to see here, not even a trailer.

Playmobil: The Movie is a dismal experience, a cheap money grab to sell more toys. 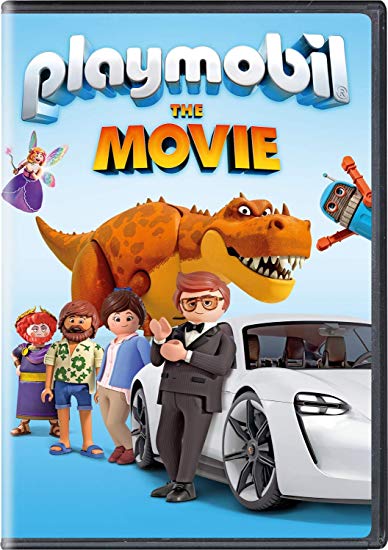