André De Toth’s Play Dirty comes off as a poor man’s The Dirty Dozen complete with a squad of misfits sent on a suicide mission during World War II and all the underhanded dealings and tension-filled maneuvers that come with the territory.

André De Toth’s Play Dirty comes off as a poor man’s The Dirty Dozen complete with a squad of misfits sent on a suicide mission during World War II and all the underhanded dealings and tension-filled maneuvers that come with the territory. Featuring a most able cast and some baits and switches that are completely unexpected (along with some that are totally predictable), Play Dirty offers a colorful if rather pedestrian combat picture for fans of the genre.

Tapped to lead a motley crew of misfits into the North African desert to destroy German fuel reserves meant to replenish General Rommel’s Nazi forces, Captain Douglas (Michael Caine), who has no field experience at all as an oil company executive supervising petrol deliveries in North Africa, finds himself at odds with the suspicious Captain Cyril Leech (Nigel Davenport) who often comes back from his missions with his commanders conveniently dead. In order to assure Douglas’ safe return from the mission, squad commander Colonel Masters (Nigel Green) offers Leech £2,000 to bring him home alive. The mission itself is a dangerous one with the team of eight (six soldiers and two North African interpreters who happen to be gay) facing treacherous terrain (spiky rocks which puncture tires, blinding desert sandstorms and soft dunes perfect for bogging down cars), armed desert tribesmen, German patrols, and an assortment of booby traps designed to thwart any mission to the petrol storage tanks.

Yes, the Lotte Colin-Melvyn Bragg screenplay attempts to craft a “Dirty Half-Dozen,” so to speak, though the various soldiers who make up the squad aren’t really seen doing anything particularly pertinent that would put their special skills, such as a demolitions expert or an armorer, for example, into practice. Instead the men as a group meet their series of challenges together as a unit though early-on it seems Leech is more hindrance than help to the mission. (There is some question that he might be a double agent colluding with the Germans, but this plot thread goes nowhere.) There’s an ingenious sequence where Douglas rigs a way to get the jeeps and trucks over an impossible to scale rocky ridge, and director André De Toth manages to provide images that illustrate the desert’s vast scale while keeping the focus on more intimate terms by showing the men at work and leisure. The script hasn’t given most of the unit’s men enough backstory to allow them to develop striking, memorable characterizations like the singular members of The Dirty Dozen’s cast were able to accomplish, so we have little invested in anyone other than the leads. A couple of major surprises along the way keep viewer interest high (a second unit one day behind Douglas’ team was intended to do the real sabotaging while the Douglas team served as decoys though not to their knowledge, the first fuel installation dump isn’t what it seems) though the film’s climactic escapade isn’t quite the thrilling, death-defying scene that would have launched this fairly routine action picture into another league. It’s a more-than-serviceable war drama without being a memorable one.

Michael Caine plays his leading role in a very low-key manner barely raising his voice except on a couple of occasions. Nigel Davenport actually has the juicier role as the enigmatic Captain Leech, and he performs it with a charismatic Cheshire cat grin that never quite allows us behind the eyes to know what he’s really thinking. Nigel Green makes a strong impression as the thick-headed Colonel Masters, determined to run his North African operations based on battle strategies perfected from the days of Alexander and Hannibal. Harry Andrews has a couple of hearty scenes as Brigadier General Blore issuing threats of demotion to Masters if his latest mission doesn’t have more success than his previous ones. As a captured German nurse, Vivian Pickles offers an impressive right cross and a never-say-die attitude toward her attackers, even in the face of potential gang rape from, among others, Aly Ben Ayed, Enrique Avila, and Takis Emmanouel. Mohsen Ben Abdallah and Mohamed Kouka as the gay Arabs Hassan and Assine make more vivid impressions than several of the other members of the nasty band.

The film’s original Panavision theatrical aspect ratio of 2.35:1 is faithfully rendered in this 1080p transfer using the AVC codec. Sharpness is generally very good, and color rendition is outstanding with believable and appealing skin tones. Contrast has been consistently applied for a first-rate picture, and black levels in some of the later scenes are excellent. There’s a bit of flicker early-on, and there are some small dust specks that are most noticeable during the later dark scenes. The movie has been divided into 24 chapters.

The DTS-HD Master Audio 2.0 mono sound mix is very effective. While explosions and gunfire don’t have that visceral impact one would find in war movies of today, the recording is still quite good with the atmospheric effects of combat, the desert sandstorms, and other ambiance blended nicely with the well-recorded dialogue and Michel Legrand’s sparse background score and some period tunes over the radio.

A fine production and some excellent actors grace director André De Toth’s last feature film Play Dirty. The Twilight Time disc also brings a first-rate sound and picture presentation to fans of the stars or the genre. There are only 3,000 copies of this Blu-ray available. Those interested in purchasing it should go to either www.twilighttimemovies.com or www.screenarchives.com to see if product is still in stock. Information about the movie can also be found via Facebook at www.facebook.com/twilighttimemovies. 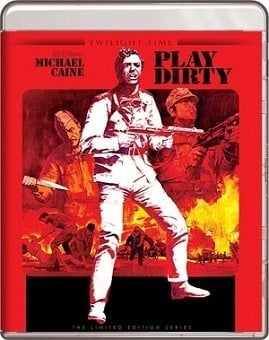