Forum List What's new Dark Style Change width
Log in Register
What's new Search
Menu
Log in
Register
Navigation
Install the app
More options
Dark Style
Close Menu
Posted on March 21, 2018 by Timothy E
You are using an out of date browser. It may not display this or other websites correctly.
You should upgrade or use an alternative browser.
Recommended for fans of the Barden Bellas and musical comedy. 3.5 Stars

The Barden Bellas return in Pitch Perfect 3, with Anne Kendrick, Rebel Wilson, Hailee Steinfeld, Anna Camp, Elizabeth Banks, and John Michael Higgins reprising their roles in this franchise.  The film performed very well at the box office so we can expect to see more installments  of this franchise in the future.

The Barden Bellas return in Pitch Perfect 3, with Anne Kendrick, Rebel Wilson, Hailee Steinfeld, Anna Camp, Elizabeth Banks, and John Michael Higgins reprising their roles in this franchise.  The film performed very well at the box office so we can expect to see more installments  of this franchise in the future.

The Bellas have all graduated from college by this time to mostly unfulfilling lives and careers. The group gets back together after Emily(Hailee Steinfeld), still attending Barden College, invites them to return for a reunion.  Members of the group are ecstatic to resume the thing that brings them joy until they learn that the invitation was actually to have the new Bellas perform for them rather than have them perform.  This disappointment leads them to sign up for a USO tour which has a competition with the winner being selected to open on tour for DJ Khaled.

The Bellas soon find themselves in Spain where they feel overmatched competing against an eclectic group of bands, including Evermoist, a girl band fronted by Calamity(Ruby Rose) as the members of that band become their arch-rivals.  The film opens with an action set-piece which frames the film and presents the main events of the film as a flashback before resuming the end of the action sequence.  Fat Amy(Rebel Wilson) features prominently in a subplot in which Amy is reunited with her father(John Lithgow) which leads through a chain of events to the group being kidnaped and taken to a yacht where Amy must rescue them.

Pitch Perfect 3 features all of the a capella singing that was a hallmark of the previous entries, and the subplot with Amy’s father and the action set piece adding a layer of depth to the film.  Fans of the other films in this franchise will probably find much to like in this film, which even includes the return of snarky announcers Gail(Elizabeth Bank) and John(John Michael Higgins) who follow the group to assemble a documentary of what is planned to be their final performance.  The film does not have any standout songs like Anna Kendrick’s “Cups” in the first film, but the soundtrack is enjoyable.

Pitch Perfect 3 appears on 4K UHD and Blu-ray disc in its original 1:85.1 aspect ratio.  The 4K UHD disc displays the film  in 2160p using the HEVC codec with HDR.  The film was finished as a 2K digital intermediate.  Blacks are solid with very good shadow detail on both the UHD and Blu-ray discs.  Fine detail is also excellent on both discs such that the UHD disc seems in motion to be merely a mild step up in quality.

The UHD disc defaults to the English DTS:X audio.  As expected, this film uses some directional audio which is more pronounced in the musical sequences than in the action set piece that opens and closed the film.  Although the audio may not be reference quality, it is seemingly flawless and serves the film well.

The special features are abundant, and are relegated to the Blu-ray disc and consist of all of the following:

Fat Amy & Fergus Casino duet:  Rebel Wilson and John Lithgow perform a mash-up of Chicago and No Doubt songs in this deleted scene which includes Rebel Wilson hanging from a stripper pole atop a casino roulette wheel.

The Bella “See You Smile” lullaby:  The Bellas sing a lullaby to Stacie’s newborn baby after Stacie misses the tour due to her pregnancy.

Extended Musical Performances(8:50):  The following extended music performances from the film may be selected individually or with a “play all” option.

“How a Heart Breaks” by Evermoist

“You Got It” by Young Sparrow/DJ Dragon Nutz

Deleted Scene: Aubrey at Amy’s hotel door(1:01):  This is the only “deleted scene” although the new and extended musical performances are technically deleted scenes as well.

Competition Crescendo(6:37):  Cast and crew talk about this film’s “riff off” sequence featuring the Bellas against their competitors on the USO Tour.

A Capella Action(3:15):  Cast and crew talk about the film’s action set piece featuring a performance of Britney Spears’ “Toxic”.

The Women of Pitch Perfect 3(4:21):  Cast and crew talk about the theme of female empowerment underlying this film franchise and the selection of Trish Sie as director for this entry.

Don’t Mess With Rebel((4:27):  Rebel Wilson talks about the new challenges of her actions sequence in this film.

The Headliner: DJ Khaled(3:01):  DJ Khaled joins this film as the headliner of the film’s USO Tour.

The Final Note: John and Gail(2:22):  Producer/actress Elizabeth Banks and John Michael Higgins talk about reprising their roles in this film.

The Final Performance(4:30): Cast and crew talk about the final musical performance in this chapter.

Hollywood of the South(2:28):  Cast and crew talk about using Atlanta as a stand-in for location filming in France and Spain.

Feature Commentaries:  There are 2 different feature length commentaries, the first with director Trish Sie and the other with produces Paul Brooks and Max Handelman.

Pitch Perfect 3 stretches its concept comfortably having its comedy venture into action territory to appeal to a wider audience.  The characters and the music drive the film with the story merely a pretense to join together musical numbers.  The video and audio are first rate on the 4K disc and the Blu-ray.  The deleted scenes and special features provide more material that enhances the feature rather than act as mere filler.  Judging by box office and critical opinion, it will probably not be too long before we see a 4th film released in this franchise.  Pitch Perfect 3 may not be for everyone but it succeeds in appealing to a broader audience. 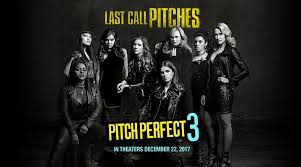