Forum List What's new Dark Style Change width
Log in Register
What's new Search
Menu
Log in
Register
Navigation
Install the app
More options
Dark Style
Close Menu
Posted on September 25, 2017 by Matt Hough
You are using an out of date browser. It may not display this or other websites correctly.
You should upgrade or use an alternative browser.
Reasonably entertaining fifth entry in the series 3.5 Stars

A new generation of would-be pirates and adventurers hitch their wagons to the tipsy star of Captain Jack Sparrow in the fifth entry in the Disney franchise Pirates of the Caribbean: Dead Men Tell No Tales.

A new generation of would-be pirates and adventurers hitch their wagons to the tipsy star of Captain Jack Sparrow in the fifth entry in the Disney franchise Pirates of the Caribbean: Dead Men Tell No Tales. As yet another in the long history of these movies, Dead Men Tell No Tales offers pretty much everything you would expect from one of these genre chapters: comedic mishaps, supernatural sea adventures, and a quest for another magical talisman, but that’s the problem: despite startling special effects and another mammoth production, the feeling of warmed-over stew is unmistakable. It can still tickle the funny bone or momentarily lift the spirits with its action and derring-do, but without anything really unique added to the mix, the series seems to be treading water and possibly on its last legs.

Vowing to find a way to release his long-doomed father Will (Orlando Bloom) from a curse that has left him at the bottom of the sea, son Henry Turner (Brenton Thwaites) goes in search of the magical Trident of Poseidon which can end all sea curses. His only hope of finding it lies with plucky astronomer Carina Smyth (Kaya Scodelario) who unfortunately is about to be executed as a witch. Into the mix dives the (as usual) drunken Captain Jack Sparrow (Johnny Depp) also about to be beheaded for robbing the bank at St. Martin (in trying to steal the bank’s safe, the pirate and his crew make off with the entire building). After a daring rescue, the three set off in search of the Trident pursued by the ghostly scourge of the Devil’s Triangle Captain Salazar (Javier Bardem) who has made killing Sparrow his chief objective and Captain Hector Barbossa (Geoffrey Rush) who likewise wants the Trident for his own purposes.

The Pirates movies come full circle with this fifth entry in that both of the new younger characters Henry and Carina have paternal ties to other characters in the franchise (yes, we even see Keira Knightley for a few very brief moments near film’s end). In Jeff Nathanson’s screenplay, that’s about the extent of the originality of the writing present with the ghostly Captain Salazar and his men merely an updated version of the undead pirates that have haunted the franchise since the very first installment (admittedly, with special effects having progressed so extensively in the dozen-plus years since the first movie, these undead buccaneers are quite imaginatively visualized). New-to-the-series directors Joachim Ronning and Espen Sandberg do as well as their predecessors with the big set pieces without forging any new ground: that overlong bank robbery sequence (though Depp’s entrance, asleep in a drunken stupor inside the vault, is amusing as is his experience later with a topsy-turvy guillotine), a couple of thunderous sea battles, a flashback that gives us the backstory concerning the enmity between Sparrow and Salazar, and the climactic split-ocean recovery of the Trident with all of the leads scurrying for survival. It all plays reasonably well, but one can’t help feeling that the two-plus hours’ running time amounts to the main characters rather running (sailing) around in circles while being pursued by various forces who want the Trident of Poseidon for their own purposes.

While Johnny Depp has returned to perhaps his most secure franchise character, he hasn’t added any new colors to his performance. Indeed, he can pretty much play this role in his sleep now, so there’s very little new that can be written about his work. Geoffrey Rush is given much more to do in this installment and actually likely delivers the movie’s best performance as his motives for assisting the evil Salazar are never quite completely clear and are left open for the viewer’s own interpretation. While Brenton Thwaites and Kaya Scodelario are fresh-faced and eager young actors, their predictable relationship is chemistry-free and is thankfully left until the late reels of the movie to even rev up a little steam. Much more entertaining is Javier Bardem who takes advantage of every opportunity to chew the scenery and really enjoy his performance of someone purely evil. It’s always nice to see the franchise’s reliable Kevin McNally as the scruffy Gibbs and Stephen Graham as his fall guy Scrum. And after Keith Richards appeared in an earlier entry as Sparrow’s father, we have Paul McCartney showing up in this movie as his uncle, naturally imprisoned and offering some sage words of advise to his nephew as he’s hauled off to the gallows.

The film’s 2.40:1 theatrical aspect ratio is faithfully rendered in this 2160p transfer using the HEVC codec. Another reference quality disc for UHD televisions, this transfer features sharpness so vivid that you can count individual cracks in the make-up of the ghost sailors and every cockle on Orlando Bloom’s face in his opening scene. Color is strong and solid with plenty of depth in the saturation levels but with never a sign of blooming. Contrast is also beautifully consistent. HDR10 has been applied quite stunningly in a few scenes especially: the bright flames of a torch are momentarily eye-searing, and black levels achieve a beautiful depth of darkness. The movie has been divided into 28 chapters.

The Dolby Atmos sound mix (decoded as Dolby TrueHD 7.1 on my equipment) is thunderingly deep and resonant throughout. Dialogue has been masterfully recorded and has been placed mostly in the center channel with some occasional directional placements which are quite effective (Sparrow tosses off some asides and ad-libs in the left rear channel as he’s being dragged off). Atmospheric effects get full surround placements, and there are impressive pans across and through the soundstage as ships crash forward through the ocean and cannons fire across the room and hit their targets. Geoff Zanelli’s background score also gets a wide expanded placement in the fronts and rears.

There are no bonus features on the UHD disc. The enclosed Blu-ray disc contains the following bonus material:

Dead Men Tell More Tales: The Making of a New Adventure (47:50, HD): a seven-part featurette on the making of the movie introducing us to all of the principal characters and the actors playing them, an extended conversation between the two youngest members of the principal cast, an interview with the actor playing the movie’s primary villain, a behind-the-scenes tour of the set with one of the three members of the cast who’s been in all five adventures, and a look at Sir Paul McCartney’s time on the set. Commenting are producers Jerry Bruckheimer and Chad Oman, directors Joachim Ronning and Espen Sandberg, costumer designer Penny Rose, make-up designer Moses King, special effects coordinator Simon Jones, and actors Johnny Depp, Javier Bardem, Brenton Thwaites, Kaya Scodelario, Kevin R. McNally, Orlando Bloom, and Geoffrey Rush.

Deleted Scenes (2:59, HD): may be watched together or in montage.

If you’re in the mood for yet another Pirates of the Caribbean adventure, Dead Men Tell No Tales is reasonably entertaining without bringing anything significantly fresh or memorable to the table. It’s gorgeously produced as always and features a talented cast obviously enjoying themselves immensely. Your enjoyment quotient, however, may vary.

Dispite the 3/5 rating on production in this review I actually saw this in the theater and loved it! I will be purchasing this title on 4K UHD BD this coming Tuesday!

It had been so long since I had seen the previous installments I was worried I would have a hard time catching up, but it stands alone for the most part so you don't have to be super familiar with the other films. While I agree that Depp's performance has grown stale, My family and I enjoyed it - probably because I went in thinking I was going to dislike it based on theatrical reviews. There were multiple laugh out loud moments for the kids, so it was a great family film to watch. There were several scenes in the opening minutes where the brightness HDR is capable of had us squinting. Like the earlier films, keep watching through the credits!

I agree with you, Adam, that some familiarity with the series helps but is not essential, and actually the movie might not seem such a rehash of earlier adventures if one has been away from the series for any length of time.

I agree, Adam. This one isn't as reliant on what came before as the others. Yes, it helps to know the relationships and backstory, but I wouldn't consider it crucial. The only time I think it becomes important to know the history is the finale. It was perfect for me.

For those curious about the digital copy code, I redeemed through DMA, and Vudu shows that I own the UHD version!

Anyone happen to try the 4K disc in a non-4K set-up? I am seeing some disc menu issues that could be my player (Sony X800) or could be the disc authoring.

Secondly, when you drill down to settings to select the soundtrack, you reach a dead end and can’t back out. The only way back to the main menu is to power cycle the player.

In case you are wondering why I would bother with 4K when I lack a 4K display? Atmos.

DMC is not carrying the 4K Blu.

Kyrsten Brad said:
Brad here. Is it me or is this 4K Blu getting hard to find at a decent price ($43 on Amazon)?

DMC is not carrying the 4K Blu.
Click to expand...

The Bluray is quite easy to find for less than $30 ( as low as $22). Amazon info on Disney is pretty useless. Not sure why DMC isn't listing it yet. Guardians 2 is there and Cars 3 4K preorder is not up.

A Few Words About A few words about...™ The Quick and the Dead -- in 4k UHD Blu-ray
2 Tags 4k a few words about blu-ray columbia dolby atmos hdr sony uhd 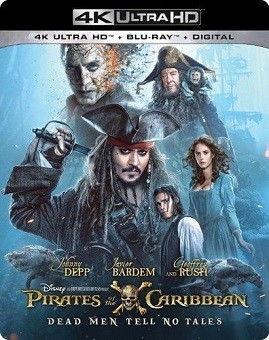