In amongst all the hype and fanfare at CEDIA earlier this month, Pioneer quietly announced what appears to be its high-end market-scooping new UHD Blu-ray player, the UDP-LX500, priced at $1,099.00 USD/$1,299.99 CAD. Clearly positioned to pick up where its former Oppo rivals left off, the new disc spinner promises ‘to provide the highest standard of UHD Blu-ray playback,’ and the UDP-LX500 includes a low resonance chassis design and engineering techniques optimized for UHD Blu-ray, a format which the company claims necessitates high rotational speeds of up to 5,000 rpm in order to deliver superior audio and video.

“The UDP-LX500 offers a variety of integration-friendly features. For connection flexibility, two HDMI outputs are onboard, allowing for a direct video connection to the display input of your choice, while still delivering Hi-Res sound to your AVR using the dedicated “Audio-Only” HDMI output,” said Rob Vieira, Product Planning & Training Manager. “One of the unit’s distinct advantages is its ability to calibrate the display’s input specifically for the UHD player for optimal video performance. On the control side of things, two-way RS-232 and IP control allows for enhanced driver options via major control system partners such as Control4 and Crestron.” 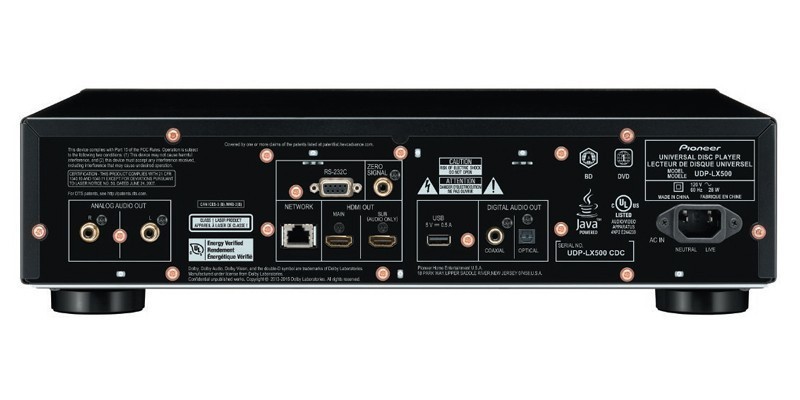 Because of the increase in the amount of image information with 4K video which, Pioneer says there is evermore a requirement for effective dampening techniques. The UDP-LX500 promises to achieve video quality improvements by applying a low noise design ethos throughout the player, minimizing noise loops in the circuitry to guarantee high-quality signal transmission.

The main board has been configured to achieve a high S/N ratio during the processing of video and audio by adopting a six-layer IVH (interstitial via hole) construction technique. As a result, Pioneer has been able to fully optimize the routing of digital signal wiring to minimize ground impedance. This should also improve  the precision of the high capacity transmission speed of 18Gbps which the latest HDMI standard now makes possible.

The UDP-LX500 includes a rigid construction and lower center of gravity, which enables the suppression of vibration transmission inside the player. The unit features a double-layered chassis with a 3mm steel plate for rigidity, as well as an acoustic damper tray and ‘ultra-quiet’ UHD BD drive. The UDP-LX500 employs audio boards focused on preserving signal purity, S/N ratio, and tonal subtlety. It also features a host of advanced sound enhancing facilities, such as a Direct function for analog connection and Pioneer’s PQLS (Precision Quartz Lock System) for HDMI connection. The Direct function turns off the digital audio and video circuits, allowing the enjoyment of high-resolution sound sources and CDs with enhanced purity.

The UDP-LX500 has also been engineered to be a competent audio-only player, with continuing support for SACD and DVD audio discs. With analog 2-channel playback, noise around the power supply and GND have been suppressed and the circuit tuned to give a full-bodied sound.

For further information, you can visit http://www.pioneerelectronics.com/PUSA/Home