Arrow Academy has released noir-meister Robert Siodmak’s very weird 1944 film adaptation of William Irish’s (Cornell Woolrich) Phantom Lady on Blu Ray.  It’s the story of a dedicated female employee’s nightmarish, mostly nocturnal, journey through war-time Manhattan to clear her handsome boss of murder.  The movie kind of plays like a grotesque variation of The Wizard of Oz with the Kansas born heroine encountering corruption, greed, perversion, and ultimately madness while being tasked with delivering a hat instead of a witch’s broomstick.  It’s something for the kiddies.

Jilted engineer Scott Henderson (Alan Curtis) walks into a nearly deserted pre-theater bar on a sultry summer night.  Other than the bartender, the only person in the bar is an unnamed, visibly distraught woman (Fay Helm) wearing an exotic hat.  Striking up a conversation, Henderson offers the mysterious woman his theater tickets.  She too, it appears has been stood up and declines.  At this point, Henderson nearly forces himself on the woman until she agrees to attend the theater with him.

They take a cab to the theater; the cabbie is duly noted as a typical 1940s New York character.  Nothing unusual there.  In the theater the couple, particularly the woman is noticed by and given the eye by the orchestra’s randy drummer (Elisha Cook, Jr.).  The woman is also noticed, or more importantly her hat is noticed by Estella Montiero (Aurora Miranda) the star of the show, who just so happens to be wearing the exact same hat.  Raging backstage, Estella discards the hat as if it were radioactive.

After the show Henderson returns the woman to the bar where they met; they part never exchanging names.

Henderson returns to his luxury apartment to find three mysterious men waiting in the dark.  Henderson’s wife has been murdered and the three men are cops led by Inspector Burgess (Thomas Gomez) and as naturally happens when a wife is murdered, the husband is the prime suspect.

Henderson explains to the police that it was his and his wife’s wedding anniversary and after entertaining friends, including Scott’s best friend Jack Marlow (Franchot Tone) the couple quarreled.  Instead of celebrating with the intended night on the town and a trip to the theater, Henderson ended up in the bar where he met and attended the theater with an anonymous woman.

The trio of detectives take Henderson to all of the places he told them about.  While all of the witnesses acknowledge seeing Henderson, they all deny seeing him with the phantom lady.  Henderson’s alibi is smashed, and he is quickly convicted and sentenced to death.

When all is lost, Henderson’s girl Friday Carol Richman (Ella Raines) decides to investigate, and eventually with the help of Burgess and Marlow, sets out to clear her boss of the murder charge.

Phantom Lady is a wacky movie; all of what is described above occurs in approximately the first reel of the film.  This first section is from Henderson’s point of view and has a Kafkaesque quality to it.  When Henderson returns to the apartment and finds the three strangers it is some time before they identify themselves as police.  One would think that the police would identify themselves immediately, but there is almost a sadistic element to the game they play with Henderson.  It is creepy.

Once Henderson is arrested the movie shifts to Carol’s point of view.  The murder trial is unconventionally shot with the camera locked on Carol’s face throughout the brief trial.  The DA and judge are only heard.  Other than spectators sitting with Carol, the courthouse is never shown.  This is similar to the way John Ford shoots the trial in The Prisoner of Shark Island, with the exception being that the focus in that scene is on the face of the accused.

The script of Phantom Lady by Bernard C. Schoenfeld is also wacky.  I haven’t read the Cornell Woolrich novel that it is based on, but without revealing the killer, I will say that it is unusual.  I don’t know if the Woolrich story is structured the same as the movie, but I wonder if the filmmakers didn’t set out to make something ‘different.’  If so, they certainly succeeded in creating an unsettling atmosphere and tone, but dramatically they made a huge mistake.

I’ve read several Woolrich stories, he may be one of the most adapted fiction writers in film history, and not only in America, as his stories are also popular in Europe particularly in France.  His popularity has a reason – the stories are weirdly irresistible.  They don’t always make sense, and this often gives them a dream like quality, but I have yet to read one that wasn’t entertaining.  While the influence of writer Edgar Wallace is obvious in later produced Giallo and Krimis, I think it might be worth noting that Woolrich was also clearly inspirational.

The movie is different in that once the leading man is locked up, it is the leading lady that pursues the truth, or more specifically, the killer.  Carol is in many ways a conventional, innocent leading lady.  It is quickly established that she is not a native New Yorker but is from Kansas.  This automatically makes her an outsider.  What is not conventional is what the filmmakers put Carol through.

Carol is introduced in a sunny office arriving on a Monday morning for a routine day at the office – though I confess I do find the timeline a little sketchy.  She picks up where she left off on Friday.  But her world is quickly upturned when she learns from the morning newspaper (?!) that her boss (and secret love) has been arrested for murder.

Once committed to clearing her boss, Carol embarks on a perverse nocturnal odyssey through New York city.  The scenes of Carol stalking the bartender play like a slasher film turned upside down as the male victim is pursued relentlessly and ultimately fatally by a woman.  It’s an expertly filmed and edited sequence.  It’s almost as director Siodmak is spoofing genre conventions before they exist!

The most remembered and citied scene of the film is the one between Carol and Cliff.  This is prime Elisha Cook, Jr., as everybody knows, the ultimate patsy.  It’s a sex and alcohol (drugs?) fueled musical scene that features a not so subtle drum solo.  How they got this by the censors is beyond me.

It is later in this sequence that Carol learns that greed was the motivation for most of the witness’s false testimony.  This is foreign to the forthright and honest Carol.  What is interesting about the sequence is the sluttish role Carol assumes to bait Cliff.  It comes out of nowhere.  Though up until this point, her character is depicted in the traditional Hollywood virginal fashion, one might ask, even though she is repulsed by Cliff’s kisses, how far will Carol go with Cliff to get the truth?

Phantom Lady is an early Hollywood depiction of a psychopathic serial killer.  Interestingly, the other film from that era that leaps to mind is Shadow of a Doubt from the previous year which was made by producer Joan Harrison’s former and future boss, Alfred Hitchcock.  Harrison (Rebecca, Foreign Correspondent, Ride The Pink Horse, Alfred Hitchcock Presents) was an unsung trailblazer in that she was one of the rare female writer/producers in the Hollywood studio system.

Director Robert Siodmak is well known to noir fans (The Killers, Criss Cross, The Strange Affair of Uncle Harry, The Dark Mirror).  Phantom Lady is hard to categorize, but I wouldn’t argue it being called a noir, though it could easily be called a horror film like Siodmak’s visually similar Son of Dracula.

Siodmak escaped from, along with his writer brother Curt, and a group of writers and directors too numerous to list, Nazi Germany.  It isn’t coincidental that these refugees would be major contributors to what later was recognized as film noir as noir is commonly recognized as evolving visually from German Expressionism, but equally important, thematically from German politics of the era where to sane people the events occurring in the real world must have seemed like an endless and tragic nightmare movie.

Siodmak, however is unique among his contemporaries in that in the early 1950s he returned to Germany where he mostly worked the last decade and a half of his career.  I would be curious to see some of his pre and post Hollywood German work, particularly The Devil Strikes at Night, a 1957 film about a serial killer in Nazi Germany.

Though well shot and directed, Phantom Lady is let down by the script.  Writer Schoenfeld worked mostly in episodic television but did write a few features including The Dark Corner, Caged, Macao, and There’s Always Tomorrow.  The killer is revealed far too early removing most of the suspense from the second half of the film.  There is also the question of how Carol’s presence at two related deaths doesn’t seem to raise any alarms with police.  They’re more than willing to fry Henderson for a lot less.

Arrow Academy’s transfer of Phantom Lady is something of a letdown.  It is beautifully shot by Woody Bredell.  Like the work of John Alton, it is almost a text book example of noir photography.  Unfortunately, this appears to be an older transfer and there has been little or no clean up as the print has plenty of marks, scratches, and blemishes.  That said, I have to confess that I’m still happy that it’s out.  When I worked at a revival house in the late 70s through the mid 80s there were no theatrical prints of Phantom Lady.  My only other exposure to this title was on local television in the middle of the afternoon over 35 years ago.  If I saw a 35mm print that looked like this at the time, I would have been happy as I would have been thrilled just to see it on the big screen.

The DTS-HD Master 2.0 (mono) audio sounds fine.  Dialogue and music are clear as are the sounds of heels clicking on the pavement and other late-night sounds.

Extras are a little light for an Arrow release:

Dark and Deadly: 50 Years of Film Noir – a documentary from the early 2000s featuring writers and directors discussing the genre with emphasis on later films.

A 1944 Lux Radio Theatre version of Phantom Lady with Raines and Curtis.

A gallery of stills and promotional images.

Phantom Lady is a mystery in more ways than one.  The first half is nearly perfect, but there is a shift at the midway point.  The movie goes off in a strange and not entirely successful direction.  But I have to confess that given the talent involved with Phantom Lady that I wonder if this wasn’t a conscious effort to fool around with genre conventions as it sometimes feels similar to the postmodern work of David Lynch. 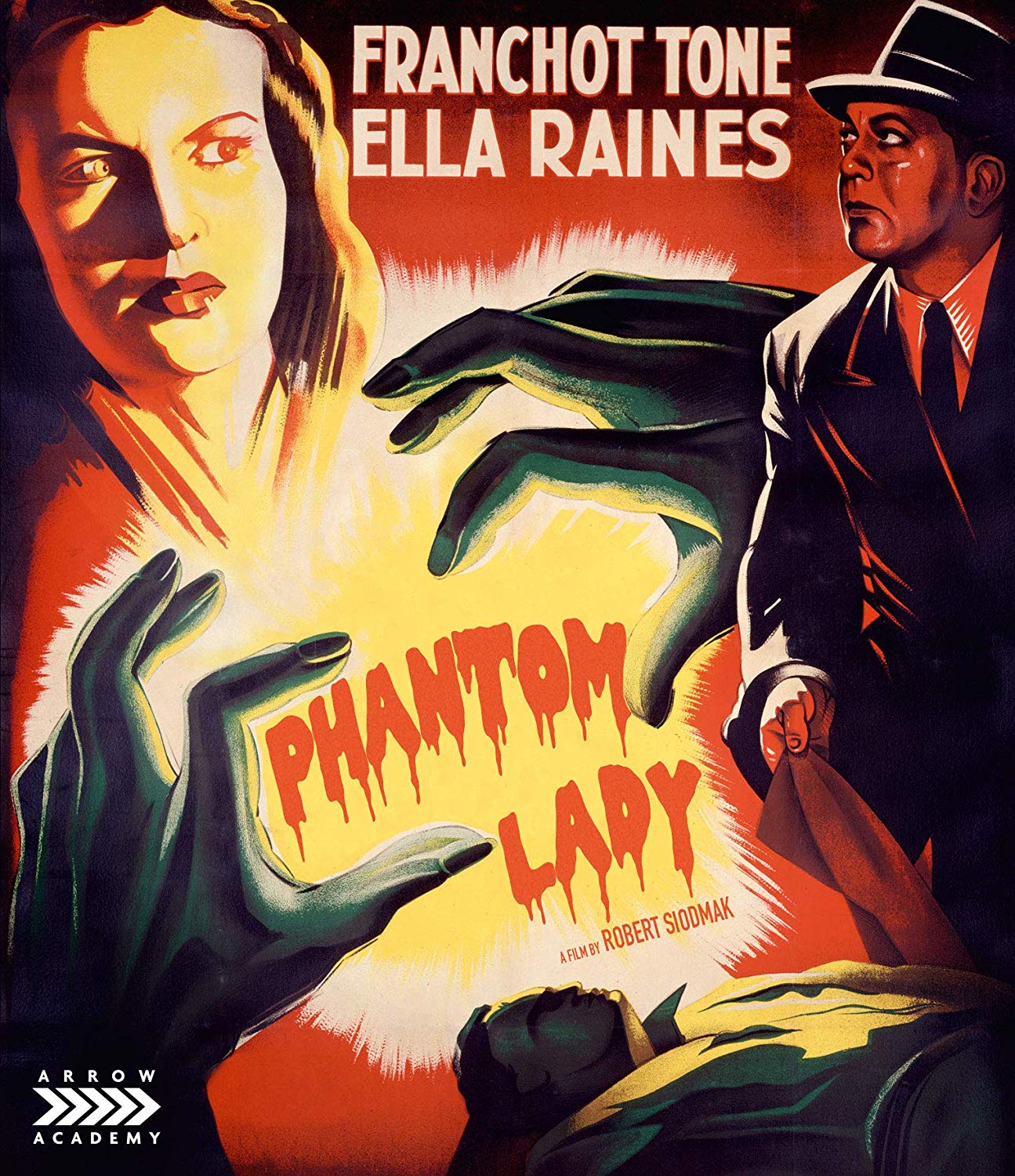