Forum List What's new Dark Style Change width
Log in Register
What's new Search
Menu
Log in
Register
Navigation
Install the app
More options
Dark Style
Close Menu
Posted on January 10, 2020 by Matt Hough
You are using an out of date browser. It may not display this or other websites correctly.
You should upgrade or use an alternative browser.
Slight comedy doesn't reach memorable levels of farce. 2.5 Stars

Arthur Hiller’s Penelope offers some nice mid-1960s location shots of New York City, but its slight story of a kleptomaniac desperately trying to rid herself of her habit never plays securely as the knockabout comedy it’s attempting to be.

Arthur Hiller’s Penelope wants desperately to be a comic romp with its bubble-headed title heroine stealing everyone blind right under their noses and getting away with it. But despite a delicious cast and some fine location photography and an eye-popping wardrobe for its fetching leading lady, Penelope falls flat without the zany pacing and madcap aura that might have lifted this routine story into something worthy of the screwball epics of the 1930s.

When Penelope (Natalie Wood) gets married to banker James Elcott (Ian Bannen), she finds him too preoccupied with work to pay much attention to her, so she robs his bank while in disguise. After she confesses to her psychiatrist Greg Mannix (Dick Shawn), he offers to return the money for her as he is secretly in love with her. However, he abandons the money when the police approach. Penelope becomes determined to admit to the crime, but neither James nor the police believe her story.

Adapted from the book by E.V. Cunningham, George Wells’ screenplay gets off to a rollicking start with Penelope disguised as an old woman robbing her husband’s newly opened bank of $60,000, but the film pretty much goes downhill from there. Confessing her crime to her devoted psychiatrist, we learn that this bank job was but the latest in a series of heists Penelope has engaged in against people she feels have wronged either her or her husband. Wells uses flashbacks to show her thieving beginning with a college professor (Jonathan Winters) trying to molest her and going through her early Greenwich Village life as a folk singer (Natalie gets to sing “The Sun Is Gray” with her own voice after being famously dubbed in West Side Story, The Great Race, and Inside Daisy Clover), at a kooky Village party, on her wedding day, and at a pool party. While a police detective (Peter Falk) seems on to her from almost the beginning of his investigation, irony rears its ugly head when the wrong person gets arrested for the crime, and Penelope feeling terrible guilt admits her addiction to stealing, all of which falls on deaf ears. Arthur Hiller’s lead-footed direction doesn’t wring much humor from the admittedly slight story (there is some unforgivably sloppy looping work when Natalie plays a succession of male characters in her husband’s fantasies), and the movie basically devolves into a fashion show for Natalie Wood: decked out in an astounding array of gowns and wigs (and in and out of shoes, the film’s supposedly hilarious running gag), she does look stupendous, but the film is just too slight to amount to much.

Natalie Wood doesn’t have much of a character to work with. She does what she can with the story, but the script and director let her down after her initial amusing turn as a little old lady bank robber. In the remainder of the film, she seems the same age whether playing a college student or scenes set in the present day. And she has no chemistry whatsoever with the rather stolid Ian Bannen playing her husband. After wonderful pairings with Tony Curtis and Robert Redford in her recent work, their twosome is rather unfortunate. She’s better in scenes with Dick Shawn as her psychiatrist, but his material doesn’t give him much of a chance to shine either. Jonathan Winters is completely wasted as the lecherous college professor (a scene that’s cringe-worthy in our present Me-Too era), but Oscar-winner Lila Kedrova and Lou Jacobi have a bright moment or two as charlatans who attempt a pitiful blackmail scheme. Peter Falk is the best thing about the film, his police lieutenant an apparent warm-up for Lieutenant Columbo which was right around the corner for him. Norma Crane as Mildred, a former sweetheart of Bannen’s James who still carries the torch for him, Jerome Cowan as a bank manager, and Arlene Golonka as a floozy stripper all score in their brief bits.

The film’s original Panavision aspect ratio of 2.35:1 is faithfully rendered in this beautiful 1080p transfer using the AVC codec. For a change, the Metrocolor doesn’t run toward the red spectrum with nicely balanced hues throughout (important for the quarter million-dollar wardrobe which adorns Miss Wood during the movie), and the transfer is spotlessly clean and crisp. Contrast has been beautifully applied for a most appealing visual presentation.

The DTS-HD Master Audio 2.0 mono sound mix sounds very appropriate for this era of filmmaking. Dialogue, the sprightly Johnny Williams score, and the sound effects are all professionally combined into a single track with no traces of hiss, crackle, hum, or flutter to distract from the proceedings.

Featurette (4:28. SD): wardrobe designer Edith Head discusses the choices for Wood’s clothes with a series of wardrobe tests showing off the many designs worn in the film.

Arthur Hiller’s Penelope offers some nice mid-1960s location shots of New York City, but its slight story of a kleptomaniac desperately trying to rid herself of her habit never plays securely as the knockabout comedy it’s attempting to be. A fine cast does what it can with pretty feeble material, and the Warner Archive Blu-ray looks simply splendid for fans of the star or the era.

I'm not going to read this review until I've watched the Blu-ray disc which, I've just been informed, is on its way to me. I'm very pleased and very impatient!.

Just give me the sequence in which a crazed Jonathan Winters chases Ms. Wood (scantily attired) around a room in a slapstick frenzy. I can do without the rest, and have for 54 years.

Looking forward to see it properly formatted after years of a TCM non-anamorphic recording for me. The Winters scene IMO is embarrassing because even if you're not offended by it so much by contemporary standards it's a jarring Benny Hill type moment coming after such a wonderfully stylish opening with the bank robbery that promises a different film entirely.

The scene where Natalie shames her husband into giving back the $5000 to the Salvation Army is also a brilliant moment.

Very disappointed at the latest Warner Archive Blu-ray releases. I find Penelope to be a really bad and hard to watch movie that doesn't deserve this kind of treatment. And the other selections last month weren't much better. Time for WB to look at just who is doing the selection of these titles. Such a great library to choose from to upgrade to HD and we get this flop when we could have Pajama Game, Damn Yankees...the list goes on and on.

Transfer looks beautiful bringing out that stylish look of 1960s New York that seems a million years away from the seedy 70s New York of "French Connection" etc. The film is still uneven but the opening robbery sequence is brilliantly executed and while the film is uneven after that (and the final twenty minutes are really the weakest alongside the bad Winters sequence), I'm glad this one finally made it after not even getting so much as a DVD release. Thank you Warner Archive!

Dick said:
Just give me the sequence in which a crazed Jonathan Winters chases Ms. Wood (scantily attired) around a room in a slapstick frenzy. I can do without the rest, and have for 54 years.
Click to expand...

You and me both. That scene and the shot of Natalie coming out of the lake in "The Great Race"

The Edith Head featurette I noticed shows Natalie modeling several outfits we never see in the film, a likely sign of some cutting room floor moments.
You must log in or register to reply here. 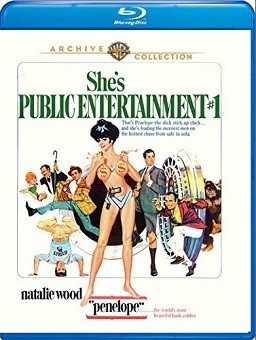