Warner’s decision to bring classic animated television holiday specials that were originally created for the small screens of the mid to late 1960s is an odd one. Granted, the Peanuts Holiday Collection contains three of the highest rated holiday specials in the history of television, but not a great deal is gained in the jump to 4K.

If you do not know what A Charlie Brown Christmas, It’s the Great Pumpkin, Charlie Brown, and A Charlie Brown Thanksgiving are, then you should very likely have your memory checked. Peanuts was, and still is, a very popular comic strip created by Charles M. Schulz. In 1965, Coca-Cola approached producer Lee Mendelson, best known at the time as a documentary filmmaker who had just completed a film on Schulz, about creating a Christmas special for television that the soda company would sponsor. Mendelson agreed and approached Schulz about bringing his Peanuts characters to the small screen. The animated special was produced in less than six months on a very low budget and directed by Bill Melendez, who had only created a few promotional spots at the time. CBS agreed to air the special, but were not too excited about the finished product, that took a fairly serious look at the over-commercialization of Christmas and re-enacted a typical school Christmas Pageant that included Linus reading from the Bible. CBS reluctantly placed it on their broadcast schedule for December 9, 1965. The ratings went through the roof, with 49% of television households tuning in.

The team followed up the next year with Charlie Brown’s All-Stars and It’s the Great Pumpkin, Charlie Brown, the latter also receiving a 49% share, with A Charlie Brown Christmas becoming a holiday staple the folloowing year with high ratings in its second run. The rest, as they say, is history, with new Peanuts specials being created almost annually with full-length animated features to follow. In 1973, the holiday trifecta was completed with the broadcast of A Charlie Brown Thanksgiving (re-enacting the stresses of putting on a feast for the extended family), giving the Peanuts gang annual specials in October, November, and December, and would continue to be broadcast on CBS through the year 2000, with ABC picking up the rights to many of the classic holiday specials in 2001, where the specials have aired since.

The specials included in this set are:

The bulk of the Peanuts specials (nine of which are included in this set) were created in the mid 1960s through the early 1990s for television, long before high definition. In particular, the early specials were made very inexpensively and very quickly, knowing that they would be seen primarily on very early color televisions with an average screen size of 2 1 inches diagonally. If you remember what those TV sets were like, their color reproduction was not great (to get an idea, check out reruns of Laugh-In on Decades, which was recorded in color on videotape in the early 1970s). Even though Peanuts was animated on 35mm film, as a way to cut corners, colors were not vibrant (for fear of bleeding) with ink and paint work not always matching and minute details were often rough, knowing the limitations of color broadcasts would likely mask those issues.

Unfortunately, most of those shortcomings became apparent when the specials were upgraded to high definition, and are even more apparent with these new 2160p transfers. That is not to say that the specials are unwatchable, as the now-considered crude animation is part of the charm of the Peanuts specials. In UHD, these specials take on a more filmic quality, with visible and noticeable grain that feels more natural. The wider color gamut, though, does make some of the ink and paint touch-ups on the animation cels more obvious (take a close look at some of the pumpkins in the patch with Linus and Sally), but it also allows for some of the subtle gradations of color to appear. Contrast is improved with the use of HDR, allowing for slightly deeper blacks. Yes, the specials look better in UHD than they did in 1080p, but the difference is very minimal.

One note, though, is that viewers have their choice of watching them in a new, cropped 16:9 widescreen presentation (the default) or the classic 4:3 original aspect ratio (you must page through the Play pop-up menu to get to them).

All nine of the specials features on the UHD discs were originally created with mono soundtracks (with possible exception of It’s Flashbeagle, Charlie Brown), but Warner has offered only a DTS-HD MA 5.1 remix on each. The best thing I can say about these remixes is that they are faithful to their mono sources while opening up the soundstage ever so slightly. Surrounds are used primarily to provide a fair amount of immersion, but nothing really discrete. Dialogue is clear and always understandable, and fidelity is adequate, considering the technology used at the time the specials were recorded.

Two of the UHD discs contain bonus episodes (as noted above in my review of The Production), otherwise only the included Blu-ray discs contain any special features.

A Charlie Brown Thanksgiving (UHD)
Play It Again, Charlie Brown (1971): Classical pianist Schroeder is invited to play at a rock concert for the PTA.

It’s the Great Pumpkin, Charlie Brown (Blu-ray)
We Need a Blockbuster, Charlie Brown (480i; 13:58): Lee Mendelson, Bill Melendez and others discuss trying to follow-up the hugely successful A Charlie Brown Christmas with a Halloween-themed special.

For those that do not already own these specials, or for those that want the two bonus specials that were not included on the Blu-ray release, then this is the version you will want. Otherwise, for most, the older Blu-ray release (with VC-1 encodes) will likely suffice. Personally, I have a bit of a pet peeve over what was included and excluded on the digital copy, and the fact that only two of the specials are HDX, while the other three are only SD. 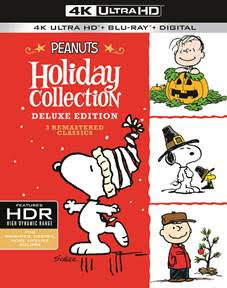