Parasound has announced more powerful “plus” versions of their A 21 and A 23 power amplifiers which have been in continuous production since 2003. The new Parasound Halo A 21+ and A 23+ employ higher-capacity power supplies to increase output from 250 to 300 watts and 125 to 160 watts respectively.

Parasound and John Curl – the company’s primary design consultant for the past 30 years – have targeted power supply transformers and filter capacitors as the foundation for power output increases. They have also refined audio quality in the signal-path and related circuitry with upgraded gold-on-gold internal connections to improve resolution and increase transparency. The company says that the sonic improvements are as impressive as the power increases. 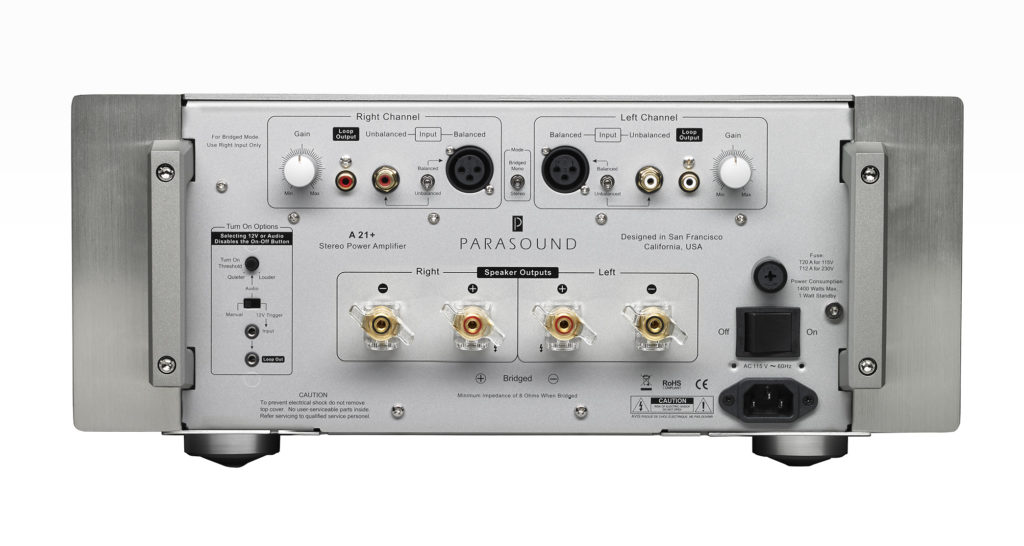 With its larger 1.3kVA power transformer and 108,000 uF power supply capacitance, the Parasound Halo A 21+ output has jumped from 250 to 300 watts into 8 ohm loads, 400 to 500 watts into 4 ohms, and from 750 to 1000 watts in bridged mode. Improvements have increased signal-to-noise ratio from 112 dB to 115 dB, increased crosstalk from 63 dB to 70 dB, while the THD (total harmonic distortion) at full rated power output has decreased from 0.2% to 0.1%. These improvements have pushed the net weight by over 18% from 60 to 71 pounds. Like the original A 21, the new A 21+ amplifier gives users a choice of balanced and unbalanced inputs with loop outputs, and variable gain controls. The most visible rear-panel difference on the A 21+ is new CHK Infinium heavy duty speaker terminals originally developed for the top-of-the-line 2 x 400w Halo JC 5.

The new Parasound Halo A 23+ has had similar treatments, with a larger 1.1kVA power transformer and 54,400 uF power supply capacitance. This supports increasing power output from 125 to 160 watts into 8-ohm loads, 225 to 240 watts into 4 ohms, and from 400 to 500 watts in mono bridged mode. The A 23+ has balanced and unbalanced inputs with adjustable gain controls, loop outputs, and new higher-performance speaker terminals adapted from the popular Parasound HINT 6 integrated amplifier.

The Parasound Halo A 21+ and A 23+ are now available in silver or black finishes through Parasound dealers with suggested retail prices of $3,149 and $1,495 respectively. For more information, visit www.parasound.com or call 415-397-7100.