Director Bong Joon-ho’s Parasite is a fascinating commentary, satire, and thriller on social norms and the ever-widening gap between the wealthy and the downtrodden.

The Kim family lives in poverty. Their apartment is located in a half-basement at the bottom of a steep hill, struggling to pay rent by unsuccessfully folding pizza boxes for the neighborhood pizza parlor. They are always hacking into nearby wi-fi hotspots so they can use What’s App to make free phone calls and text messages. When a neighboring building is being fumigated, patriarch Kim Ki-taek (Kang-ho Song) urges the family to leave their windows open so they can receive free pest extermination. A friend of son Ki-woo (Woo-sik Choi), Min (Seo-joon Park), arrives to give Ki-woo a scholar’s rock thought to bring wealth to a family. Min is also there to ask Ki-woo to take over his job of tutoring a young girl from a wealthy family while he leaves the country to attend school abroad. Not having the credentials, he asks his sister, Ki-jung (So-dam Park), who is skilled at Photoshop, to create false documents that also change his name to Kevin to take with him to his job interview at the Park’s residence. After meeting with both Mrs. Park (Yeo-jeong Jo) and her daughter Da-hye (Ji-so Jung), Kevin is hired and soon realizes that Da-hye’s younger brother Da-Song (Hyun-jun Jung) is in need of an art therapist, and recommends “someone he knows” – his sister Ki-jung. Before long, the entire Kim family, one by one, replaces the rest of the Park’s staff, with the father replacing their driver and mother (Hye-jin Jang) the housekeeper. The Kim’s are definite con artists, assimilating themselves into the Park’s daily life. At least, until the Parks leave for the weekend, and with the Kim’s taking up residence and helping themselves to the luxuries of the upper-class home, a secret is discovered when the former housekeeper (Jeong-eun Lee) returns.

Bong Joon-ho’s Parasite is an oddly entertaining movie, with its unexpected twists and turns, you are never exactly sure who the parasite in the title is, and to reveal much more would take most of the joy of experience what is perhaps the most acclaimed movie to come out of South Korea. Everything is nearly perfect in this film, the performances, the gorgeous production design, the screenplay, the direction, etc. It’s no wonder Parasite has received six Academy Award nominations, especially considering it is a foreign language film.

Parasite was captured at 6.5K resolution on Arri Alexa 65 cameras and completed as a 4K digital intermediate with an aspect ratio of 2.39:1. Unfortunately, the movie’s home video distributor in the United States, Universal, is forgoing a 4K physical release at this time (it is available in 4K digital) and only releasing it on Blu-ray. That’s not necessarily a bad thing, because this 1080p AVC-encoded transfer benefits greatly from the higher resolution master. Details are exquisite, showing off the intricate wood and marble grain in the Park’s home and the filth of the Kim’s household. Colors are vibrant without appearing overly saturated. Black levels are deep and inky, with excellent shadow detail. There were no visible compression or other artifacts.

Despite the end credits displaying a Dolby Atmos logo, Universal is only offering the film with a Korean DTS-HD MA 5.1 track (the 4K digital is also 5.1). That being said, this is a quite remarkable mix. Dialogue is clear and directed mostly to the center channel. Ambient effects and music round out the soundstage, providing a subtle immersive environment for most of the film, kicking into high gear when necessary (the rain storm and backyard party, for example).

Parasite – Fantastic Fest 2019 Q&A with Director Bong Joon-ho (1080p; 19:03): The uncredited moderator asks the director a few questions before taking a few more questions from the audience. This is rather disappointing due to the very few questions represented and the time taken for translation.

After viewing Parasite, one can understand the accolades this film has been receiving since it premiered at Cannes earlier this year, walking away with the Palme d’Or. The presentation is excellent, although the extras are on the weak side. Regardless, the movie is highly recommended. 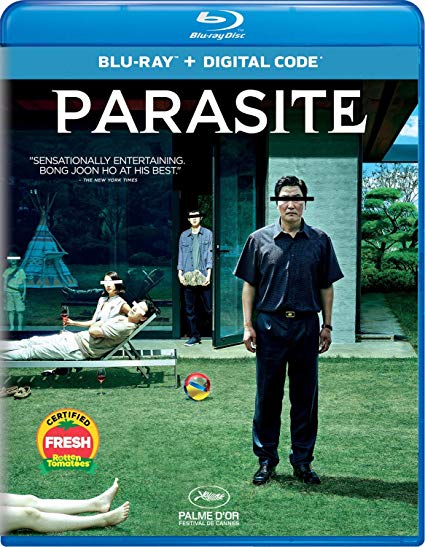