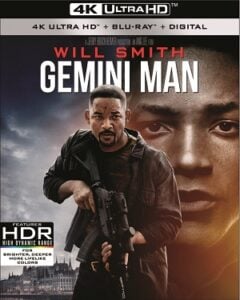 On December 9th, as part of the promotion for the upcoming digital and 4K/Blu-ray release of Gemini Man, I attended a demonstration and Q&A of the 4K Ultra HD Blu-ray disc at Paramount Studios, along with representatives of multiple other news outlets and websites. (I was very pleased to be able to spend a little time talking to Bill Hunt of The Digital Bits as part of this event.) Special thanks to Paramount Home Entertainment and Alan Meier for inviting HTF to this event and having me in the room.   Before we go any farther, I’ll note that the movie will be available for digital streaming and download on December 23 (ie one week from today, and just in time for Christmas), and the 4K Ultra HD Blu-ray and the other disc variations will be available on January 14.

Gemini Man is the latest Ang Lee feature, an action thriller starring Will Smith as an intelligence operative on the run who comes face to face with a much younger version of himself. Doing a project like this requires a fairly involved technical process, and Gemini Man was actually in development for about 20 years before Ang Lee came on board. Full Disclosure: In my day job, I worked on a test shoot for an earlier iteration of Gemini Man in the mid-2000s. We spent a day with Jon Voight where we shot him in two modes – one in regular makeup at his then-current age, and another with tracking marks on his face where his performance would be tracked into a CGI younger version of himself. It was an interesting day just to deal with the technology, but it clearly wasn’t developed enough at that time for the movie to be feasible. When Ang Lee took over the project in 2017, he was able to make use of the prior 20 years of development and the modern day level of CGI tools. 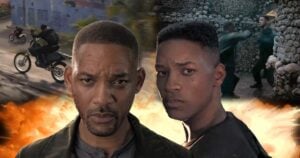 At the demonstration, Ed Hoxsie (Paramount Senior VP) discussed the depth of the technology in play for Gemini Man, both in terms of how it was shot and in how the 4K Ultra HD Blu-ray has been prepared. As it turns out, the movie was shot in 3D at 120 fps, using modified Arri Alexa cameras. The actual feature source was delivered at 4K resolution. The disc is maxed out at 100 gigabytes, with 70.5 gigs going to the movie itself, and another 160 to the menus and subtitles. (The reason for the larger number for the menus is that the 4K disc has them at 60 fps.) The average bitrate when viewing the movie is just over 84 mbps, with the rate getting close to 96 mbps during the major action sequences.

To be clear, the 4K Ultra HD Blu-ray of Gemini Man will be the first one to include a feature film presented in 4K at 60fps and Dolby Vision and Dolby Atmos. Ang Lee’s prior film, Billy Lynn’s Long Halftime Walk, did have 4K 60fps presentation as well with Dolby Atmos, but that release did NOT have Dolby Vision. In addition, the new 4K disc for Gemini Man has the 4K 60 fps menus with HDR and a single short featurette on the CGI elements presented in 4K at 60 fps and with HDR. (This featurette, which runs just a few minutes, is really a deconstruction of multiple heavy VFX shots, showing how a motorcycle action sequence that may appear simple is actually loaded with face replacements, reflection removals, digital vehicles and obstacles, and even completely digital frames to bridge an impossible jump between one section of live action stuntwork and another. The other featurettes on the 4K Blu-ray are presented in HD at 24 fps.

Ed Hoxsie also showed our group six excerpted scenes in 4K at 60 fps, using Dolby Vision and Dolby Atmos. I’ll qualify this to note that we were limited on the level of volume and subwoofer we could enjoy in the demonstration, given that we were in an upstairs office at Paramount. (The guys working in the office just below us would understandably have joined in the room shaking, but not in a way that a moviegoer would find delightful…) Watching the scenes, we could immediately see that the level of detail and color depth was striking. We were shown scenes that present wildly different lighting and atmospheric information – from bright daylight exteriors and interiors to dusk rooftop discussions to night interior/exterior action beats. Multiple exterior shots in Cartagena included rich colors, such as the pale green visible in a library interior, and the solid blue of a parked car in one exterior. I’ll also note that a slow-motion shot of Will Smith and Mary Elizabeth Winstead in the midst of a room being decimated by gunfire was unbelievable – the detail of objects and water flying toward camera in particular. (I would imagine that this really plays best in 3D.) (I also note that the shooting frame rate for the ultra slow motion shot suggests that they either ramped the Alexas up to several hundred frames per second or used a Phantom, which can take the frame count up to 2000 fps…) And I’ll add that a nighttime VFX shot of a plane in flight with a moon hanging in the background was extremely steady to watch. Ed Hoxsie noted that even on a regular Blu-ray, this shot would likely have banding and other instability in the moon image – but with the massive increase in data for the 4K Ultra HD Blu-ray, that problem can be solved.

That being said, the experience of watching a movie shot and projected at 60 fps is something that may vary for each viewer. Theoretically, this experience is thought to present a much more realistic impression, and thus create a more thrilling and immediate impact than a movie presented at 24 fps. Watching these scenes, I did not have that reaction – if anything, the high frame rate presentation felt closer to me to an extreme high quality phone video. Keep in mind that this was not due to an error in the process but rather to my having spent nearly all of my life viewing content at either 24 fps or at the slightly higher videotape rate of 30 fps. For me, 24 fps “feels” right for dramatic content. A much higher frame rate for me actually feels LESS realistic rather than more. The dramatic scenes we were viewing, such as the rooftop conversation, felt more like rehearsal video, and I had the feeling I was watching actors playing roles rather than watching characters interacting. The action sequences tended to feel like BTS video of those sequences, with an element of video gaming thrown in. At the same time, that slow motion shot of the materials and water flying toward camera did look spectacular. I believe that a younger viewer is more likely to enjoy the experience of 60 fps than I can.

(As one more sidenote, I should disclose that I have seen technology like this once in the past – back in the late 1980s, I was invited to a presentation of Douglas Trumbull’s Showscan process. For that event, we were shown the short feature New Magic, which had been shot on 70mm film at 60 fps and was then projected on 70mm at 60 fps. The impact was very similar to what I saw at the 4K 60 fps event for the current film. If anything, the Showscan presentation looked best when it appeared to show the area behind the movie screen.)

I must also note that the 4K Ultra HD Blu-ray of Gemini Man is the ONLY way viewers will be able to experience the 60 fps presentation of the film. (We were told that the movie was actually screened at its full frame rate of 120 fps in only two theaters, one being the AMC Burbank.) The Blu-ray and standard definition DVDs of the movie will only be available in 24 fps. The movie will be available for streaming through multiple services as of December 23rd, even going up to 4K as far as the services can accommodate, but those presentations will still be at 24 fps. The plus factor there is that, as Ang Lee notes in the featurettes on the disc, the 24 fps presentation will be smoother, given that the source file was built at from a 120 fps shoot and has so much more information than one would normally expect to find. For 4K home theater enthusiasts, this will be a very interesting disc to demo on their systems – and on any 4K system that can handle Dolby Vision and Dolby Atmos, you should already be fine to view the 60 fps presentation. You may need to make sure your receiver is not aggressively filtering anything out, but a current 4K receiver should process the Gemini Man disc without a problem. 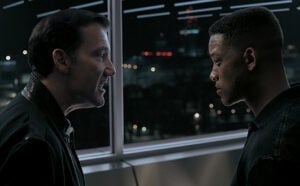 We concluded with a brief discussion of what can come next in home theater technology, given where we are currently sitting, what with 4K, Dolby Vision, Dolby Atmos and the higher frame rate presentations now possible. The source file for Gemini Man is 19.34 terabytes, which tells us that a higher capacity disc (or file system) could provide an even higher definition presentation of the film. But where do you go from here? One notion we discussed was the potential of glasses-free 3D, where the movie could be presented in 2 visual channels of 60 fps each. But that will have to wait until we actually have glasses-free 3D, which is something that may not happen for many years, if ever. (I’ve seen prototypes for this, but nobody has been able to crack the issue of creating a consistent arc of viewing – the test models would only allow for several “sweet spots” from which one could see the 3D.) And there is the question of whether we will see any DVD format past 4K, or if we will change over at this point to downloads.