Pan was a major box office disappointment for Warner Brothers, and this upscaled UHD Blu-ray is something of a disappointment, too, delivering very minimal improvements over its Blu-ray counterpart.

Trying to craft an origin story, particularly to a well-known and beloved classic, can be like walking a tightrope. One small misstep, and you may plummet to your death. Director Joe Wright (Atonement, Anna Karenina) seems like an odd choice for a family-friendly fantasy, and that is just one of the many stumbles that the film makes. Wright can’t seem to make up his mind as to what type of movie he is trying to make. Pan starts out as a cross between Oliver Twist and Hope and Glory, as Peter (Levi Miller) grows up in an orphanage in London during the German Blitz bombings in World War II, realizing that the nuns in charge are selling the kids to Blackbeard (an unrecognizable Hugh Jackman) as slaves to mine Pixum to keep him from aging any further. It then evolves into a musical of sorts as Blackbeard’s pirates chant the chorus to Nirvana’s Smells Like Teen Spirit when the Captain returns home, finally settling on a fantasy as Peter spends the next hour or so trying to find his powers to fly in order to save both himself and Tiger Lily’s tribe (Spielberg’s infinitely better Hook suffered from a similar problem). Then there’s the issue with casting. While both Levi Miller and (to some extent) Hugh Jackman manage to elevate their performances above the material, Garrett Hedlund is annoying as an American cowboy named James Hook who befriends Peter that often sounds like a bad Christian Slater impersonation (never mind the fact that Hook got his name from the infamous and yet to occur encounter with a crocodile) and Rooney Mara is completely miscast as a white Tiger Lily, providing a very bland performance as Hook’s love interest.

As with almost all of Warner’s first wave of UHD Blu-ray releases, Pan was completed in 2K for theatrical release, having been shot digitally with the ARRI Alexa. Warner has upscaled the 2K image to 2160p, retaining the film’s original theatrical aspect ratio of 2.40:1, and then regraded using High Dynamic Range. Compared to the included 1080p Blu-ray, there is a minimal increase in detail and color gamut on the UHD Blu-ray, so much so that I really had to study each version back and forth several times. Yes, the colors are more vivid on the UHD, particularly once we arrive in the Indian reservation and journey into the land of the faeries. But there was no noticeable difference in contrast levels between the two discs, even during the much darker opening sequences in London.

The UHD Blu-ray contains the same Dolby Atmos mix found on the Blu-ray release, which is backwards compatible to Dolby TrueHD 7.1 for those, like myself, who are not equipped with ATMOS. The 7.1 mix also folds down nicely to 5.1, still providing an immersive sound experience for the viewer. Dialogue is directed mostly to the center channel, remaining clear and understandable. The track makes good use of discrete surround effects throughout as well as a nice low-end on the LFE channel.

Dolby Atmos: While there were some missed opportunities, especially in the third act, overall this is a nice Dolby Atmos mix with a fair amount of well placed localized effects, especially in the beginning of the film when the pirates descend from the ship to grab the boys from their beds and the ensuing battle over London.  Overhead channels were also effectively used when the prisoners were chanting in the mines and when Hook, Pan and Smee were in the Jungle.  I listened to it on a 7.2.4 system. — Adam Gregorich

Never Grow Up: The Legend of Peter Pan (1080p; 10:50): A look back at how J.M. Barrie’s classic came to be and some of the different incarnations it has taken over the years (but no mention of the previous film adaptations or Spielberg’s modern-day sequel).

The Boy Who Would Be Pan (1080p; 6:07): A look at how the filmmakers found Levi Miller and his reaction to being cast in the film.

It is no wonder why Pan was not embraced by audiences or critics worldwide after viewing it. The upscaled UHD version is rather disappointing, looking almost identical to its 1080p Blu-ray cousin. My advice to fans of the film – save a few bucks and get the Blu-ray edition. 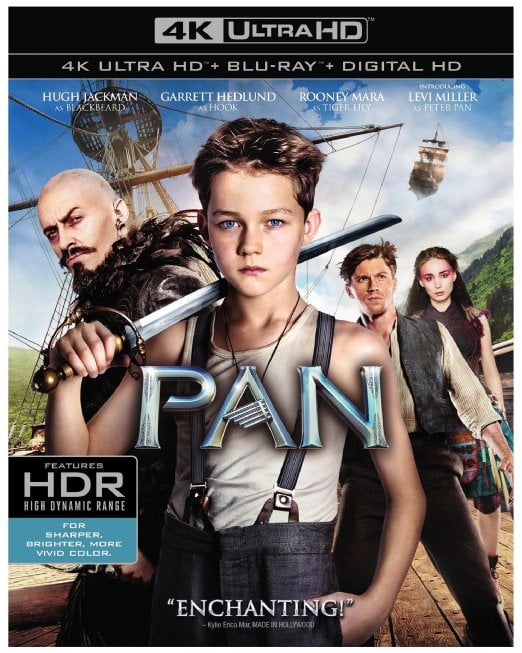