Forum List What's new Dark Style Change width
Log in Register
What's new Search
Menu
Log in
Register
Navigation
Install the app
More options
Dark Style
Close Menu
Posted on April 24, 2018 by Todd Erwin
You are using an out of date browser. It may not display this or other websites correctly.
You should upgrade or use an alternative browser.
A sequel that bests the original 4.5 Stars

Having settled in with the Brown family, Paddington (voiced by Ben Wishaw) visits Samuel Gruber’s (Jim Broadbent) gift shop in search of a present to send to Peru for his Aunt Lucy’s (voiced by Imelda Staunton) 100th birthday. The young bear happens upon a pop-up book of London, and begins to take odd jobs such as window washing in his neighborhood of Windsor Gardens to earn money to purchase the book. Unbeknownst to Paddington, legend has it that the book contains clues to a hidden treasure. Out of work actor Phoenix Buchanan (Hugh Grant) is obsessed with finding that treasure to fund his one-man show, and late one night steals the book and frames Paddington for the theft, placing the bear behind bars. Mary Brown (Sally Hawkins) with help from her children Judy (Madeline Harris) and Jonathan (Samuel Joslin) and housekeeper Mrs. Bird (Julie Walters) begin their own investigation into the theft in hopes of freeing Paddington. While in jail, Paddington befriends convict and prison cook Knuckles McGinty (Brendan Gleeson), teaching him how to make orange marmalade and pastries, softening the hearts of the hardened criminals. As Knuckles tells Paddington “I don’t do nothing for no one for nothing,” and Knuckles ends up using Paddington to help he and a group of criminals escape from prison under the promise to help clear the bear’s name. The plan backfires, leaving Paddington on the run on his own.

I first viewed Paddington 2 during its theatrical run, despite not having seen the first film. Co-writer and director Paul King provides a nice and brief recap of the previous film, including a prologue explaining how Paddington first met his Aunt Lucy and Uncle Pastuzo (voiced by Michael Gambon), so viewing the first film is not entirely necessary. The movie’s cast is almost a who’s who of Britain’s top character actors, including Hugh Bonneville as the Brown patriarch Henry, Sally Hawkins, Julie Walters, Brendan Gleeson, Jim Broadbent, Tom Conti as the unfortunate judge, Noah Taylor as fellow inmate Phibs, Joanna Lumley as Buchanan’s agent, and the list could go on and on. Hugh Grant is the real highlight of the film, one of his funniest roles in ages as the narcissistic washed up actor Phoenix Buchanan who’s latest claim to fame is as the spokesperson for a brand of dog food. Visual Effects house Framestore has made some great advancements in the CG character of Paddington, making him more photo-realistic and with a wider range of subtle facial expressions, almost giving WETA and ILM a run for their money. When all is said and done, though, Paddington 2 is a sweet, delightful, and funny family film.

Paddington 2 was captured digitally on Arri Alexa cameras and completed as a 2K digital intermediate. Unfortunately, Warner Bros. (the film’s US distributor) decided to not release the film on 4K UHD Blu-ray (although it is available in 4K on services such as Vudu and Google Play Movies). That being said, the Blu-ray that Warner has released looks very much as it did in theaters, very film-like in appearance with consistent, life-like and vivid and warm colors. Detail is exceptional, from the woven fabrics of the costumes to the individual hairs of fur on Paddington. Contrast is also very good with deep inky blacks retaining strong shadow detail and no visible crushing.

Paddington 2 was released theatrically with a Dolby Atmos soundtrack, although it is doubtful that many theatres here in the US presented the film in an auditorium equipped with the three-dimensional sound system. Thankfully, Warner has included the Atmos track (and no redundant DTS-HD MA 5.1 track) on their Blu-ray release. That all being said, it is hard to tell, with a few exceptions, that this is an Atmos track, as heights are used very sparingly and subtly. The opening prologue, with Aunt Lucy and Uncle Pastuzo enjoying a picnic on the rope bridge in Peru, and the climax on the train, are where the soundtrack is more immersive with air and other atmospheric sounds emanating from above the viewing area. Otherwise, this is a very solid lossless surround track featuring crisp dialogue directed mostly to the center channel, while music and other sound effects are spread across the fronts and to the rears. LFE is used occasionally during the more action-oriented sequences, otherwise the track has a tight low-end.

Paddington: The Bear Truth (1080p; 5:20): A look at what makes Paddington such a delightful, warm character.

How to Make a Marmalade Sandwich (1080p; 2:42): A kid-friendly (wtih adult supervision) recipe for orange marmalade.

The Magical Mystery of Paddington’s Pop-Up Book (1080p; 3:03): A discussion on the technical design of the pop-up book featured in the film.

The Browns and Paddington: A Special Bond (1080p; 5:43): The actors playing the Brown family discuss coming back to do a second Paddington movie.

Audio Commentary by Director/Co-Writer Paul King: King discusses making the film at great length, with a warning up front that this will be a more technical commentary.

Digital Copy: An insert contains a code to redeem a digital copy on Movies Anywhere. I redeemed my code on Vudu, which granted me HD rights on both Movies Anywhere and UltraViolet partners.

Paddington 2 is a sweet, delightful, and funny film for all ages. Warner’s Blu-ray presentation is first-rate, and the extra, while more kid-friendly than overly technical, are fun to watch as well. Recommended.

Unfortunately, Warner Bros. (the film’s US distributor) decided to not release the film on 4K UHD Blu-ray (although it is available in 4K on services such as Vudu and Google Play Movies).
Click to expand...

The 4K disc can also be ordered from Amazon UK. No region coding on 4K discs, though the blu-ray included in the package is likely locked to Region B.

Nominated for Best Film by BAFTA. Alongside God's Own Country. Strange bedfellows indeed!

The first didn't quite work for me as well as the Stuart Littles but felt like them. I got the set with the little plush Paddy, which I like better than the movie. He's on my movie shelf whereas the movie blu is packed away somewhere.

Thanks for the review, Todd. I love this film so much and am anxiously awaiting the arrival of my Amazon package in the mail. I'm glad this one has commentary, which the first film did not.

We've watched it twice already ... the double-dip to please friends. It's very charming .. though I'm in the minority, and still slightly prefer the first movie. My Region 2 disc is flawless in every way.

You mean you need an excuse to watch it again?

Malcolm R said:
The 4K disc can also be ordered from Amazon UK. No region coding on 4K discs, though the blu-ray included in the package is likely locked to Region B.

I bought the (upscaled) 4K version from StudioCanal in the UK - it is fabulous! An utterly charming movie.
You must log in or register to reply here. 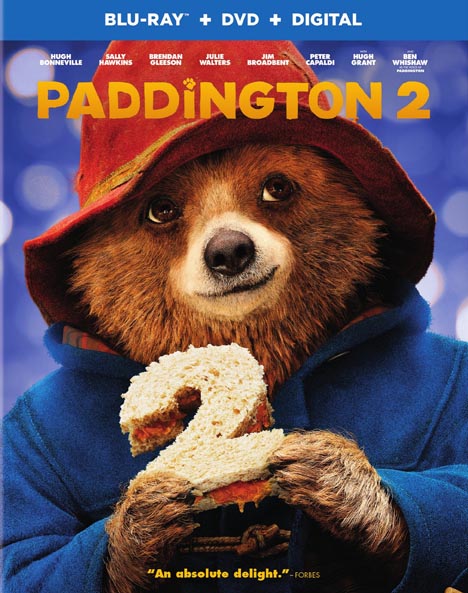