Forum List What's new Dark Style Change width
Log in Register
What's new Search
Menu
Log in
Register
Navigation
Install the app
More options
Dark Style
Close Menu
Posted on August 19, 2016 by Matt Hough
You are using an out of date browser. It may not display this or other websites correctly.
You should upgrade or use an alternative browser.
A classic western drama gets a beautiful high definition release. 4.5 Stars

One of the greatest westerns ever made, William Wellman’s The Ox-Bow Incident is more accurately a thinking man’s drama in western trappings, a morality play where the forces of good and evil don’t wear black or white hats but rather resemble ordinary people like us.

One of the greatest westerns ever made, William Wellman’s The Ox-Bow Incident is more accurately a thinking man’s drama in western trappings, a morality play where the forces of good and evil don’t wear black or white hats but rather resemble ordinary people like us all caught up in something that defies rationality but what separates the moral from the immoral with a strong, swift stroke.

After a lengthy period on the range, cowhands Gil Carter (Henry Fonda) and Art Croft (Harry Morgan) ride into a small western town just as a mob begins gathering to go in search of cattle rustlers who allegedly killed a local ranch owner. Though general store owner Arthur Davies (Harry Davenport) begs the so-called posse not to take the law into their own hands and lynch whomever they find, the crowd led by former Confederate Major Tetley (Frank Conroy), deputy Butch Mapes (Dick Rich), and hot-tempered Jeff Farnley (Marc Lawrence) are quite clearly out for blood. They come upon a trio of men (Dana Andrews, Anthony Quinn, Francis Ford) sleeping by a campfire who have some of the rancher’s cattle and no bill of sale for them. Along with some other circumstantial evidence, the majority of the posse votes to string them up at sunrise. Only seven men stand against the majority in thinking the men deserve a fair trial, but without the sheriff’s (Willard Robertson) authority, they’re helpless to stop them.

With World War II raging in Europe and Asia while the film was in production, it’s clear that Lamar Trotti’s screenplay based on the novel by Walter Van Tilburg Clark is much more concerned with questions of right and wrong and the morality of standing up against what’s wrong even if one is in the minority. A great deal of attention is given to characters who are always put down for wanting to do the right thing, calling their actions womanly or feminine (Major Tetley’s intellectual son Gerald played by William Eythe is constantly put down as unmanly by his father for his having a moral conscience, but by the end of the film, it’s very clear who the stronger of the two Tetleys is) while the film’s major female character Ma Grier (Jane Darwell) is among the most bloodthirsty of the entire posse. Though the film may be a western, it’s much more concerned with ideas than with action, so don’t expect large scale action scenes (there is a brief saloon brawl in the film’s expository sequence where Henry Fonda’s ornery Gil enters into a fight with his nemesis Jeff Farnley) or gunfights or stagecoach holdups (the one coach in the picture carries Fonda’s lost girl friend now married to a San Francisco dude in a sequence that’s more intrusive than necessary to the movie but does offer a bit of gunfire and chasing for those who wouldn’t have been satisfied without it). Director William Wellman takes special pains to study constantly the faces of both the victims and their assailants throughout (a slow pan across the mugs of the people who vote for the hanging shows us in many of them the grim bloodthirstiness present there), and while the Production Code prevents the violence from being graphically shown, it’s so beautifully staged and shot (by Oscar-winning cinematographer Arthur Miller) that the horrific effect is more than sufficient without its being rammed into our faces.

It’s a great role for Henry Fonda, but while Wellman gives him a dandy opening scene to show us many facets of his personality, he rather fades in significance during the middle portions of the movie, his being as ineffectual as the other six men who believe justice is not being served. Frank Conroy as the pompous, blustering martinet Major Tetley heads the other side, cold and bullying without an ounce of compassion in his make-up, it may be a one-note role, but his is a galvanizing performance. Harry Davenport is likewise superb as another voice of reason that gets ignored while Harry Morgan (who won a performance award from the National Board of Review for his work in the movie) as Art Croft is agreeably supportive and more level-headed than best friend Gil. There is great work from Dana Andrews, too, as his Donald Martin slowly comes to realize how dire his situation is and begins inwardly and outwardly crumbling. The movie gives a nice chunk of time to Anthony Quinn’s enigmatic Juan Martínez, a multilingual Mexican who’s likely smarter (and tougher as we see in an operation scene) than all of the people out to kill him. William Eythe as the quietly stalwart Gerald Tetley, Leigh Whipper as the sweet-natured but ineffectual religious presence Sparks, Jane Darwell as the cackling, coldblooded Ma Grier, and Paul Hurst as town drunk Monty Smith all etch memorable portraits in a film that truly has no weak performances.

The film’s original 1.33:1 theatrical aspect ratio is rendered in 1080p resolution using the AVC codec. A beautiful 4K scan has resulted in a crisp, completely clean picture filled with sharp details and with a grayscale which features good (but not great) black levels and whites that are almost searingly bright. Shadow detail is strong, and contrast has been consistently maintained for a very pleasurable viewing experience. The movie has been divided into 8 chapters.

The DTS-HD Master Audio 2.0 mono sound mix offers era-representative audio which engineers have cleaned expertly to be rid of hiss, crackle, and other age-related artifacts. Dialogue has been well recorded and has been mixed with surety with the sparse score (basically “Red River Valley” in a few key scenes and some gospel spirituals courtesy of Sparks) and atmospheric effects where appropriate.

Audio Commentary: a shared track which combines comments from western scholar Dick Eulain and the director’s son William Wellman Jr. For a film scholar, it’s disappointing that Mr. Eulain doesn’t attempt to identify the tremendously strong array of Hollywood character actors who populate the movie instead spending his time speaking of the differences between the book and the film and extolling some of the themes which get stronger treatment in one or the other. Wellman also repeats himself on several occasions though does offer some juicy behind-the-scenes comments on his father’s relationships with actors Henry Fonda and Anthony Quinn.

“Henry Fonda: Hollywood’s Quiet Hero” (44:51, HD): an episode from the Emmy-winning series Biography in which Fonda’s life and work are examined closely while family and work associates of the icon offer testimony to his work ethic and off screen behaviors.

Restoration Comparison (2:52, SD): the 2002 restoration of the movie is compared to earlier transfers in split screen set-ups.

Promo Trailers: Yellow Sky, Man of the West, Man with the Gun.

The Ox-Bow Incident may have lost the Best Picture Oscar to Casablanca, but it took home Best Film honors from the National Board of Review and is a film whose reputation has only gained in stature and appeal down through the years. Kino Lorber’s Blu-ray release offers a beautiful high definition rendering of a movie that deserves to be seen and talked about more than seventy years after its first presentations. Highly recommended!

Ordered using the link above!

It's a masterpiece, so great news about the quality, Matt. A friend of mine turned me onto it in VHS days. I thought I'd died and gone to heaven!
Met Marc Lawrence at the time Marathon Man was in cinemas. A kind, sweet nature that belied the looks that had him cast so often as a villain. Proof you can't judge a book............

That cover art looks more appropriate for "The Night of the Living Dead" than this movie.

Johnny Angell said:
That cover art looks more appropriate for "The Night of the Living Dead" than this movie.
Click to expand...

It clearly has an antecedent in this poster ...

Which was adapted for the Koch German bluray 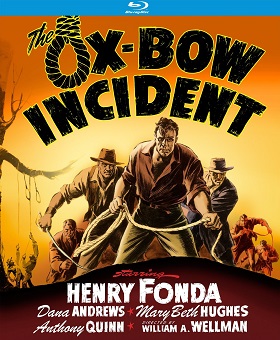