Inspiring but predictable and preachy 3.5 Stars

Sony’s Overcomer, from the studio’s Affirm Films label, is a well-made and well-intentioned story of a young female athlete who finds faith and the strength to find her identity that becomes more of a sermon during its second act.

Over the Christmas holidays, my wife and I watched two movies whose genre is often referred to as “faith-based” – 2018’s I Can Only Imagine (which was received as a gift) and last year’s Overcomer (which I received from Sony to review). Both were very successful films at the U.S. box office, with one being an example of how to make a big budget “faith-based” film and the other on how not to. While Overcomer falls into that latter category, it is still a well-made and well-intentioned movie that, unfortunately, knows it is a “faith-based” film and flaunts it by becoming more interested in getting its message across than telling a story that appeals to a wide audience.

John Harrison (co-writer and director Alex Kendrick) is a successful basketball coach at a private Christian high school, coaching his team to second place and losing by only three points during the final game of the season. When financial hardship hits the town after one of the major employers closes its factory, Harrison finds that most of his team have moved away, forcing the school to discontinue its basketball program. The school’s principal (Priscilla C. Shirer) appoints Harrison to coach the Track team, a sport that Harrison knows little or even cares about. Only one student shows up for team tryouts, Hannah Scott (Aryn Wright-Thompson), an orphan who has just moved to the area with her grandmother. Oh, she also suffers from asthma. Harrison takes her on with the principal’s urging, despite being ridiculed by his basketball star son and the rest of the teaching staff. But Hannah has some problems that she keeps to herself – she steals items from those around her and has low self-worth. While visiting a fellow parishioner in the hospital, Harrison wonders into the room of Thomas Hill (Cameron Arnett), a blind patient suffering from kidney failure brought on by diabetes who just so happens to have once been a Track star. The two men become friends as Harrison solicits coaching advice from Thomas, and quickly finds out that Thomas once had a daughter that he gave up for adoption. As the audience, we already know where this film is going (surprise! Hannah is his long-lost daughter), but this is also where the Alex and Stephen Kendrick’s script suddenly becomes more of a sermon as Hannah is introduced to Ephesians and understanding that she has tremendous self-worth. There are scenes of prayer, one in particular between Harrison and his wife (Shari Rigby) that comes off as scripted and staged, as they try to decide if they should introduce Hannah to her father, thought to have been dead all these years, without Hannah’s grandmother’s approval. Overcomer spends most of its second act driving its message home to the audience more as a sermon than playing it under the radar of its Blind Side inspired sports story. Yet, that is where I Can Only Imagine, directed by Andrew and Jon Erwin (no relation to myself) succeeds – its story of forgiveness is its underlying theme, yet its story is centered around Mercy Me’s lead singer Bart Millard’s experiences growing up in an abusive household that eventually led him to write one of Christian music’s most popular songs of all-time.

The performances are all very good (although Kendrick’s can get a little cheesy in a few spots), and Bob Scott’s cinematography along with the uncredited production design help make the film look much richer than it actually is (it was made on a measly $5 million budget). The first and third acts are very entertaining, but the audience the movie is trying to reach will likely squirm in their seats for the middle third.

Overcomer was shot digitally with Arri Alexa cameras based on what little information that is provided on IMDB and from watching much of the behind the scenes footage in the special features, likely completed as a 2K digital intermediate. Sony’s 1080p AVC-encoded transfer retains the movie’s 2.39:1 theatrical aspect ratio. Colors are well-saturated and natural. Contrast is very good, with black levels that never quite approach a pure black (more like a very dark grey). Detail is also very good, particularly in facial features and fabric textures, but there are a few shots that are somewhat soft.

Overcomer is a dialogue-driven movie, so it’s no surprise that the DTS-HD MA 5.1 track does its job and not much else. It’s a front-heavy mix for much of its nearly 2-hour running time, with surrounds engaging to extend the music score and ambient effects such as crowd noise. LFE does nothing more than to help provide the score a deeper low end. Dialogue is clear and understandable throughout.

Audio Commentary with Director Alex Kendrick and Producer Stephen Kendrick: The two brothers speak rather extensively about the production and how much making the movie was a family affair.

Deleted Scenes (1080p; 11:41): Nine scenes are included after a lengthy introduction by the two Kendrick brothers.

“Overcomer” in 60 Seconds (1080p; 1:11): Humorous takes from the movie that tell the story in less than a minute (not including credits).

The Making of “Overcomer” (1080p; 21:32): Some of the perils, mostly weather-related, that the cast and crew had to deal with, along with interviews and behind the scenes GoPro videos.

The Opening Drone Shot (1080p; 4:33): Shooting the opening shot from the skyline and trees, into the gymnasium, and right smack into the team conference on the basketball court.

Resources Video (1080p; 4:33): Alex and Stephen Kendrick host what is essentially an advertisement for various study resources that tie-in with the movie.

DVD Copy: The movie in 480p with Dolby Digital 5.1 audio and most of the special features listed above.

Overcomer has an entertaining first and third act, but spends too much time in its second act preaching its message. The plethora of special features will likely be interesting to the movie’s fan base and to those who may not know much about how movies are made. 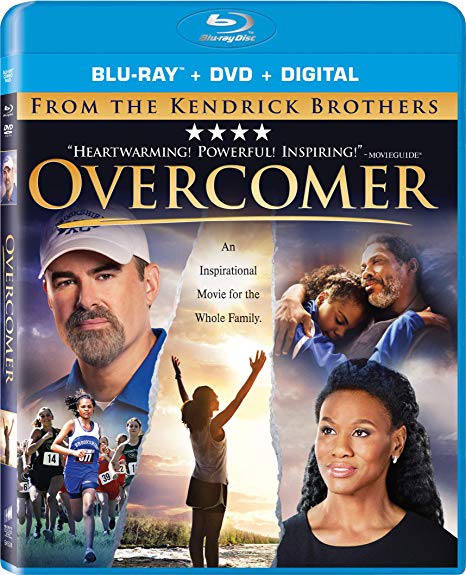