Not often screened in revival theaters or on television, Leigh Jason’s Out of the Blue contains a fair share of fun for those willing to adapt to its off-the-wall mood and tone.

A screwball farce produced in 1947 when audiences’ tastes for the genre were on the wane, Leigh Jason’s Out of the Blue features some attractive performers and occasionally witty banter, but the direction isn’t swiftly paced enough for effective farce, and some of the actors obviously aren’t comfortable in the genre. The Classic Flix presentation of this often forgotten 1940s comedy is beautifully rendered, but one must be in an open or forgiving mood to get the most out of this uneven comic effort.

Dipsomaniac decorator Olive Jensen (Ann Dvorak) passes out in married man Arthur Earthleigh’s (George Brent) apartment while his wife (Carole Landis) is out of town for the day; thinking she’s dead, he puts her on his neighbor (with whom he’s feuding) David Galleo’s (Turhan Bey) terrace. When Galleo and his girl friend Deborah Tyler (Virginia Mayo) discover what Arthur has done, they hatch a scheme to get even with the henpecked Arthur with the help of the perpetually tipsy Olive.

The story and screenplay by Vera Caspary, Walter Bullock, and Edward Eliscu could be considered borderline tasteless by some in the same way Weekend at Bernie’s rubbed some viewers the wrong way with its caviler attitude toward death. More problematic, however, is the film’s typically warm-hearted treatment of alcoholism: Olive, in addition to being a complete airhead and total nuisance, is also constantly soused, passing out and in a constant state of near-death with no one particularly worried about her health in their continual efforts to ply her with brandy to keep her behavior in check. There are some witty quips between the sophisticates in this piece, all residents of the avant-garde Greenwich Village of the 1940s, but the production design has everyone living in lavish apartments that in real life would have housed a couple of dozen people or more in the same amount of space. Director Leigh Jason doesn’t keep things popping (despite a reasonable 84-minute running time) quickly enough to sustain the farce (look at Howard Hawks’ Bringing Up Baby for a primer on this kind of back-and-forth knockabout), and the movie ends up seeming longer than its running time would indicate.

Top-billed George Brent wasn’t really suited to this kind of farce; his goggled-eye big takes at surprising moments are a little too overboard for real humor, but Virginia Mayo and Turhan Bey perform more in the spirit of the moment and keep their physical reactions in check. A little bit of Ann Dvorak as the drunken Olive goes a long way in this movie; she’s funny at first, but she wears out her welcome with her brittle and one-note performance. Carole Landis is also quite monotonous as the nagging wife reducing her husband to an obedient and frightened lapdog in one of her final film performances. Elizabeth Patterson and Julia Dean provide a goodly amount of fun as the busybody spinster neighbors snooping on everyone, and Charles Smith gets some fine moments as the elevator boy who sees much but says little.

The film’s original theatrical aspect ratio of 1.37:1 is faithfully rendered in this 1080p transfer using the AVC codec. Gloriously clean and with silken grayscale for the most part (with just enough grain to indicate a film source), the image quality is beautifully sharp and clear. Contrast is excellently applied for a first-rate product. Only the tiniest bit of a scratch appears late in the film. Otherwise, this is a pristine transfer. The movie has been divided into 20 chapters.

The DTS-HD Master Audio 2.0 mono sound mix is very much of its era. Mostly free from age-related artifacts, there are occasionally some audible instances of muffled flutter and a pop or two, but generally the dialogue, the Carmen Dragon score (which occasionally Mickey Mouses quip-for-quip on the soundtrack), and the sound effects blend seamlessly into a unified whole.

Not often screened in revival theaters or on television, Leigh Jason’s Out of the Blue contains a fair share of fun for those willing to adapt to its off-the-wall mood and tone. The Classic Flix Blu-ray release is a welcome one with above average sound and a sterling picture for those who are fans of the genre or its numerous stars and supporting players. 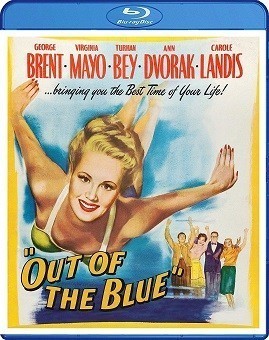