Writer-director Mike Flanagan celebrates horror styles of a generation or two ago with Ouija: Origin of Evil.

Writer-director Mike Flanagan celebrates horror styles of a generation or two ago with Ouija: Origin of Evil. Utilizing motifs of the period and generating suspense and horror without excess gore (hence the PG-13 rating), Flanagan mostly succeeds in achieving his goals with a fair share of scares and a genuine concern for the wellbeing of a family at the mercy of vengeful spirits.

Fortuneteller Alice Zander (Elizabeth Reaser) is barely making ends meet as a single mother with two daughters: high school sophomore Lina (Annalise Basso) and precocious ten-year old Doris (Lulu Wilson). After attending a party and seeing the way a ouija board captivated her friends, Lina suggests to her mother that she should add a ouija board to her other paraphernalia in the séance parlor. When she does, she’s astonished to sense the presence of one or more genuine spirits, channeled through the innocent Doris. Finding a buried stash of money and the noticeable increase in business are all good for the Zanders, but the spirits are inhabiting Doris more and more suggesting that more sinister work is afoot while mother and older sister remain oblivious to the inroads these spirits are achieving.

Director Mike Flanagan and his writing partner Jeff Howard have fashioned another good foundation for their brand of horror storytelling. We slowly are introduced to bits and pieces of the explanation behind these spirits who begin consuming Doris all the while dreading what may or may not happen to the remainder of the people in her orbit, not just her mother and older sister but also the kindly high school principal Father Tom Hogan (Henry Thomas) and Lina’s guileless boy friend Mikey (Parker Mack). Flanagan doesn’t usually take the cheap way out with jump scares (a hand coming from nowhere to tap someone on the shoulder, a pet flying through the room) though he will on occasion have a possessed character present behind another character which we can’t see until the one person moves slightly to the side and sound gets accentuated matching quick movements (a coverlet jerked away, a spirit popping up in the ocular piece of the ouija pointer). There are one or two character motivations that don’t ring true, too: Mikey, after being told by the creepy Doris the gruesome way a strangling affects the victim in stages, later agrees to follow her down to the basement alone, characters agree to stay together for safety’s sake and then just as suddenly separate. But the shudders are usually honestly earned, and the family members do get under our skins well enough that we hate to see them meet their makers. Director Flanagan by setting his story in 1967 also gets to have fun with that era’s filmmaking motifs: he uses the Universal logo from the 1960s and has added reel change markers five times in the film to give it period flavor. There’s also an emphasis on deep focus photography using period appropriate lenses and practically done special effects when certain elements justify them.

As other horror filmmakers found in their fright films of past eras (The Exorcist, The Other, The Omen), finding a fresh-faced child who comes to embody dire and dreadful evil is important for this kind of film, and in Lulu Wilson, an excellent choice was made. The young actress is believable as both the innocent young girl (who doesn’t understand what a “scam” is when one of her mother’s customers uses it after a reading) and the possessed purveyor of death later in the movie. Elizabeth Reaser is an appealing widowed mother doing what she can for her family, and Annalise Basso is likewise a pleasing teen actress without the more modern tendencies for sarcasm, promiscuity, and profanity. Henry Thomas is also a most welcome sight as the gentle-voiced but wise Father Tom, a strong if quiet performance. Parker Mack gets the job done as boy friend Mikey while Halle Charlton and Alexis G. Zall make believable friends for Basso’s Lina. Doug Jones has fun as the ghoul behind the initial possession, and Michael Weaver has a couple of effective moments as Alice’s late husband Roger.

Filmed anamorphically but with the sides cropped to give the image a 1.85:1 aspect ratio, the 1080p transfer (AVC codec) has an unusual but very expressive look and feel. Sharpness is very good, and color values are first-rate with lifelike and appealing skin tones. Black levels are outstanding with excellent details in the shadows, most important in a horror film where important events occur at night and/or in confined spaces like a dimly lit basement. The movie has been divided into 20 chapters.

The DTS-HD Master Audio 5.1 sound mix is all one could hope for with a horror film mimicking the fright films of the 1970s and early 1980s (think The Changling and Poltergeist which were both inspirations for the writer-director). Dialogue gets a mostly center channel placement, but spirit sounds and Doris’ voice sometimes get routed most effectively throughout the soundfield making for a very engrossing aural experience, and the music score by the Newton Brothers evokes Jerry Goldsmith in The Omen quite wonderfully and gets threaded through the fronts and rears. Of course, the LFE channel gets its fair share of use, too, with specific fright moments.

Audio Commentary: director Mike Flanagan does an excellent job pointing out his directorial choices and the reasons behind them throughout his commentary making for fans of the film something they will want to listen to.

Deleted Scenes (16:58, HD): seven scenes may be watched individually or together in montage.

Home Is Where the Horror Is (4:45, HD): director Mike Flanagan and the cast talk about the importance of the location for establishing the creepiness necessary for the scares to work, and all of them praise production designer Patrcio Farrell for the interior design of the set.

The Girl Behind Doris (4:01, HD): director Mike Flanagan and actress Lulu Wilson talk about her audition for the role and how she landed it while other cast members praise the young star for inhabiting her part so thoroughly.

Ouija: Origin of Evil is quite an effective ghost story with excellent actors, solid direction, and first-rate period production design that puts us right back into the late 1960s as this sad and gruesome tale unfolds. Outstanding audio and video also should make this a treat for horror fans.

OK, I ended up seeing this the other night and to my great surprise (this was not a film I was going to watch) it was fantastic. It is beautifully shot, acted, and expertly directed by Mike Flanagan. It is a stand alone film although marketed as a sequel to the bad 2014 Ouija.

If you enjoy the horror genre this is well worth checking out and I found it highly entertaining with the cast being outstanding. The film focuses on building a creepy atmosphere and sense of dread and the family at the heart of the story are solid characters that are not just cardboard cutouts. Henry Thomas is also excellent as the priest that attempts to come to the aid of the family. It is also, as a bonus, a gorgeously shot period piece that will look excellent in your home theater and rather than going for the drab look of something like the second Conjuring film this film fills the screen with color and beautiful images.

This is primarily an old fashioned ghost story/possession film but don't worry there are no overblown exorcisms in this film. Great atmosphere, beautifully filmed, and excellently acted I highly recommend this one to fans of the horror genre. A fun horror night in your home cinema.

I should also add that because this film is a low budget prequel to a low budget first film that it is wonderfully not full of craptacular CGI because they likely could not afford that. Which means while the tale is set in the 1960s it is also told the old fashioned way...and this really worked for me.
Last edited: Feb 21, 2017
You must log in or register to reply here.
Share:
Facebook Twitter Reddit Pinterest Tumblr WhatsApp Email Link 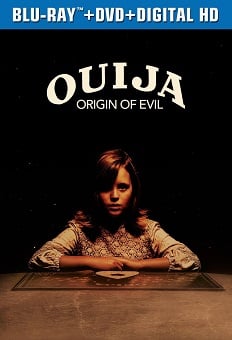